The road to Essaouira

Friday 29th March 2019 dawned bright in Taroudant and our mission for the day was to get to Essaouira, around 260km away. 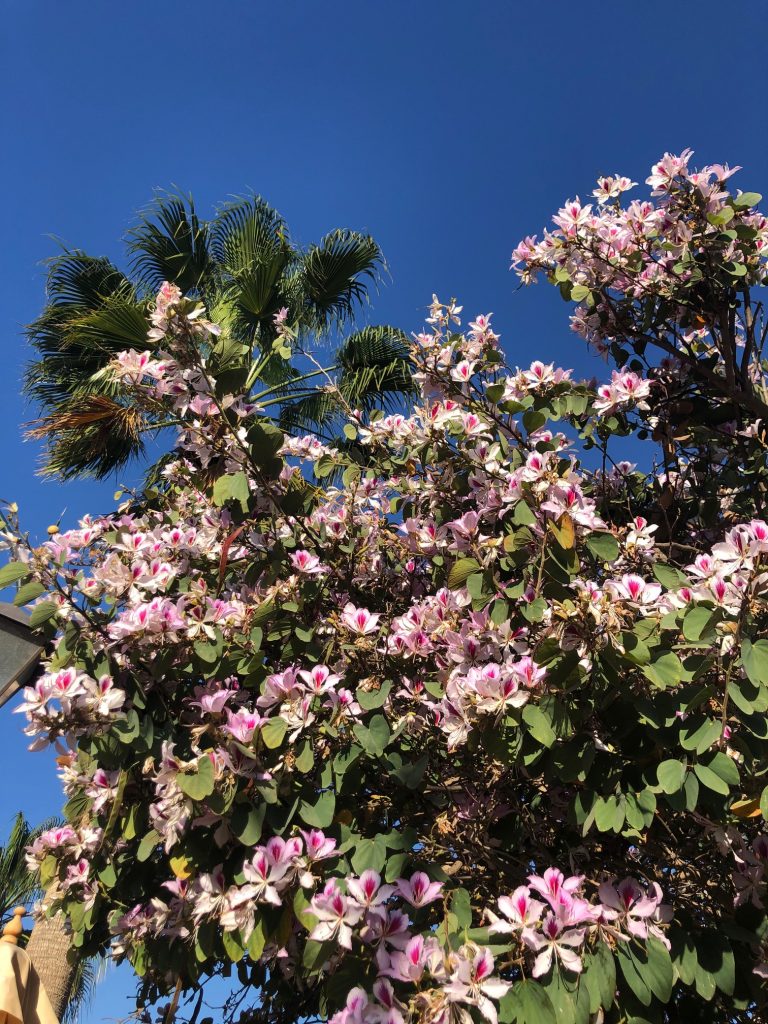 Fabulous tree in the hotel garden

After a good breakfast enjoying the wonderful hotel garden, we packed our stuff back into the incredibly dirty Priscilla and I decided that our first stop should be at a car wash! Luckily there was one just up the road, and for a few euros the guys did an excellent job of making Priscilla look presentable! 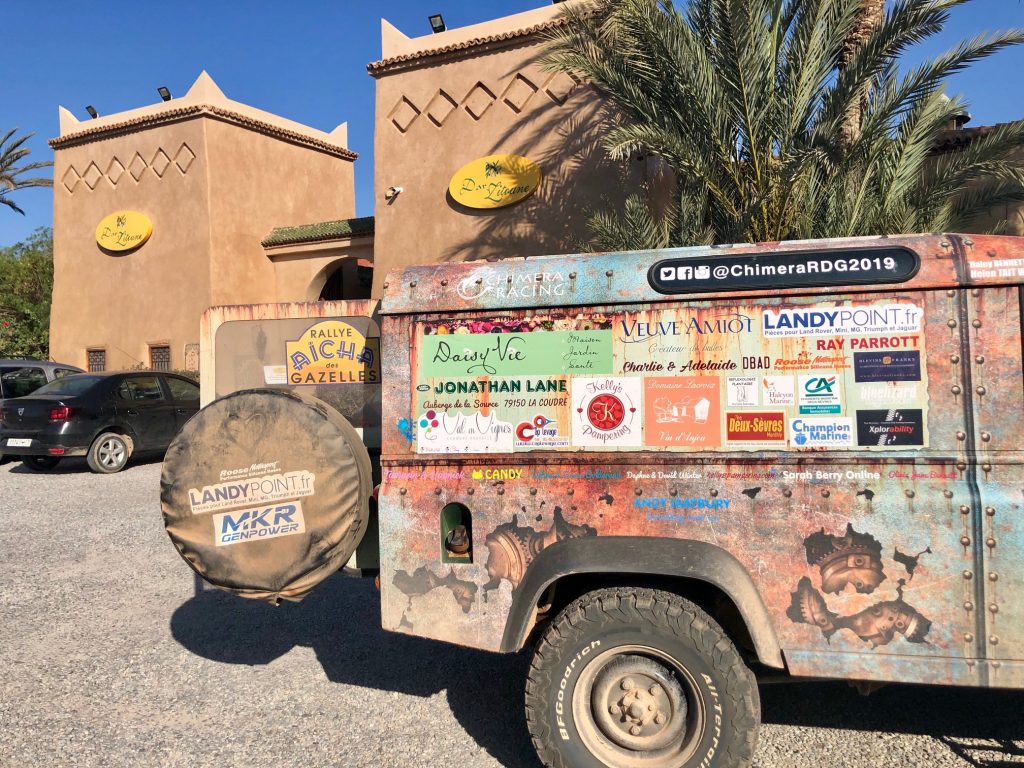 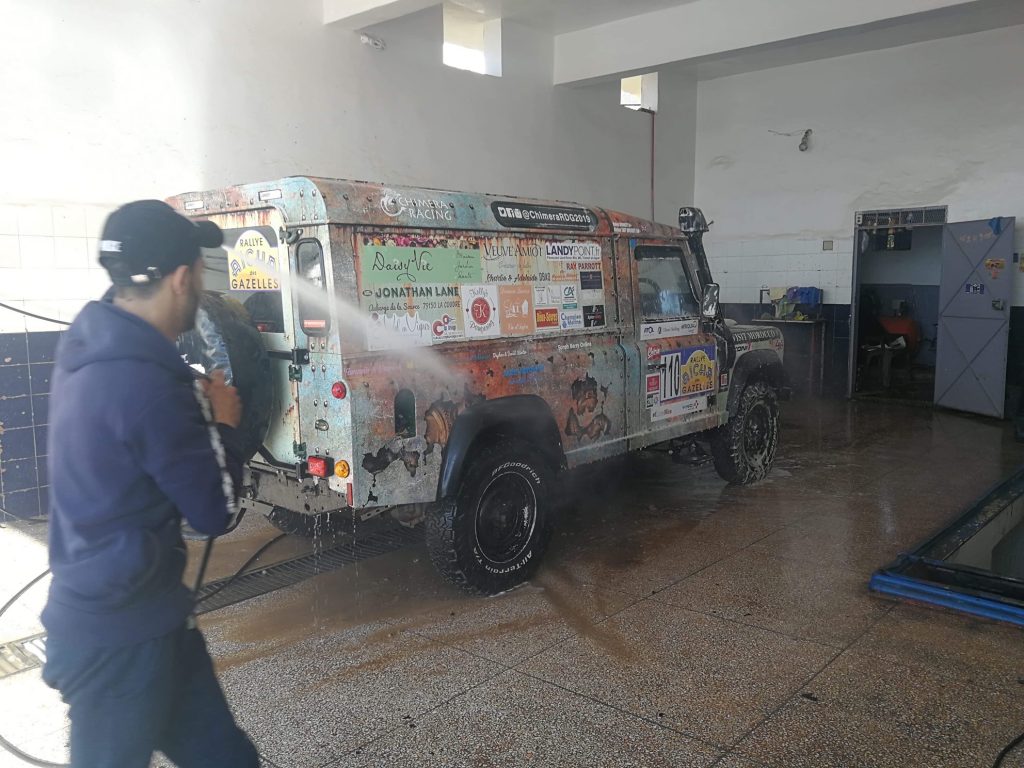 As I said before, driving is always a pleasure for me, so we headed off west towards Agadir enjoying a day with no particular pressure.

At Agadir, negotiating around the city was a little tense, but we got our first glimpse of the sea, and it felt good! Of course we had had quite a lazy morning really, but some of the other Gazelles had clearly been up bright and early, and already we were seeing other Gazelles cars on the road. 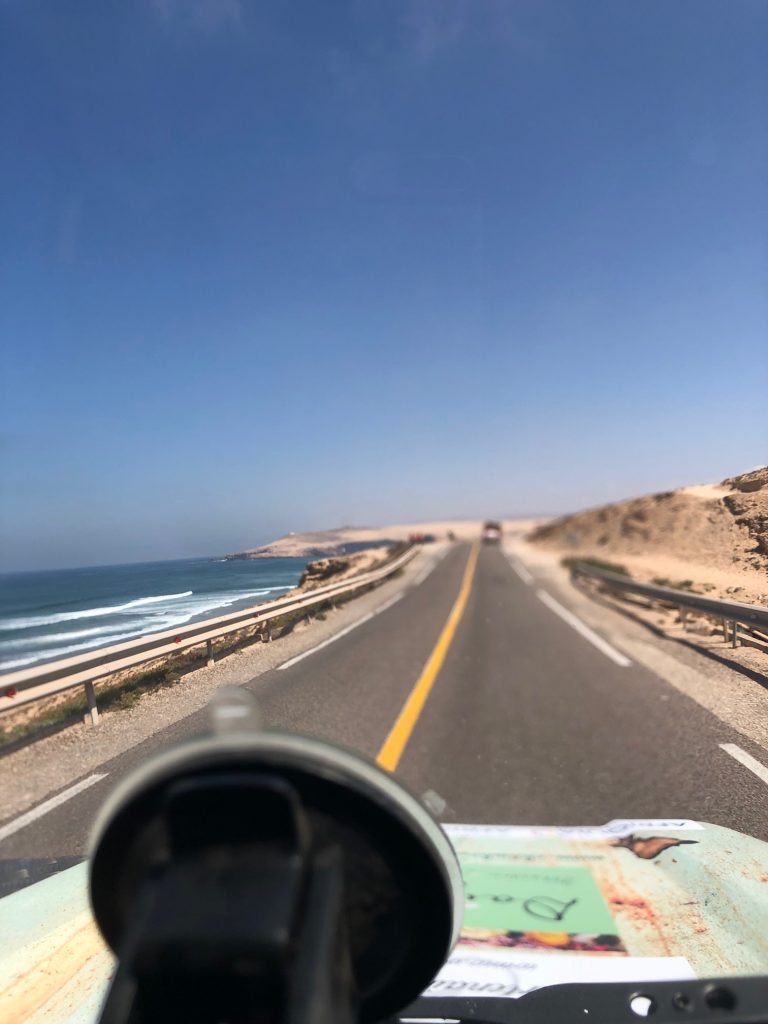 The ocean at Agadir

After Agadir we headed north up the Atlantic coast, enjoying fabulous views and colourful coastal villages before going inland a bit through some twisty mountain sections as we headed towards Essaouira.

This road took us through the famous region where the argania spinosa trees grow. This is the tree that gives the amazing Argan oil. The oil is prized today for cosmetic and culinary uses, but has been the basis of traditional Berber remedies for centuries. It is the only region in the world where these trees will grow, and alongside the road there are many co-operatives selling the products made from the oil. We stopped at one of the co-operatives, where there was also a little cafe, and were soon joined by the Algerian girls Lylia and Saliha. 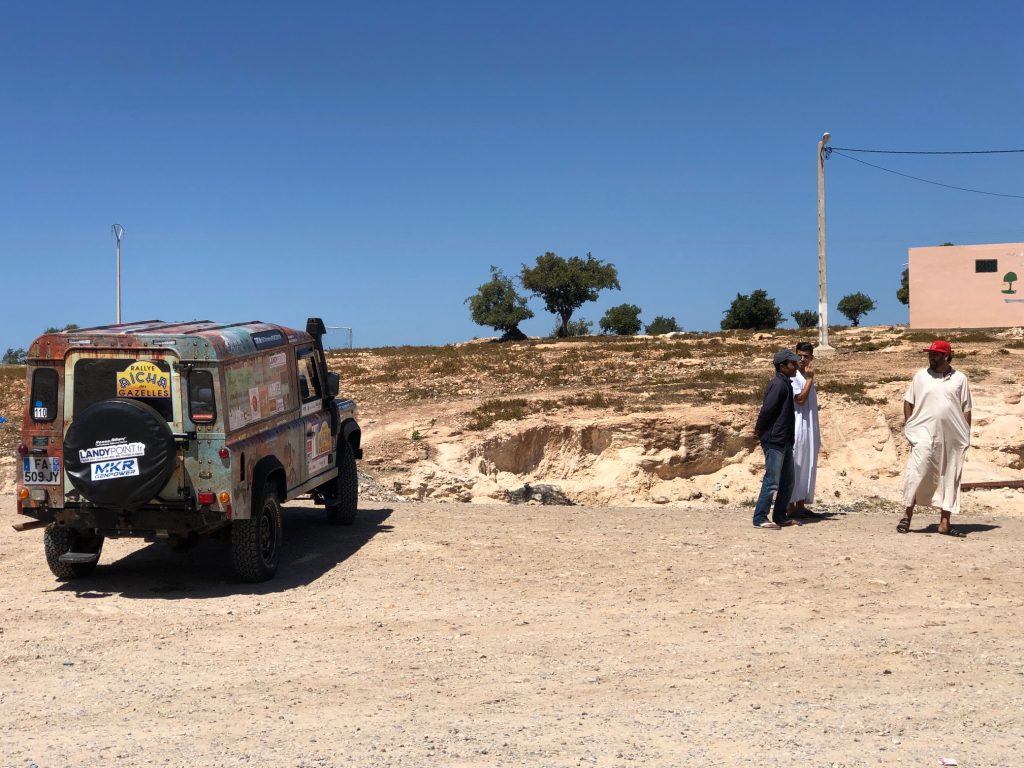 At the argan oil co-operative

After we had purchased some wonderful Argan goodies, at a fraction of the price in Europe, the proprietor took us to see how the oil is extracted. This work is usually done by local women. Lylia had a go at grinding the nuts in the traditional way with the rock grinder which is called a R’ha … it is quite hard work! 40 kilos of kernels only produce 1 litre of oil! 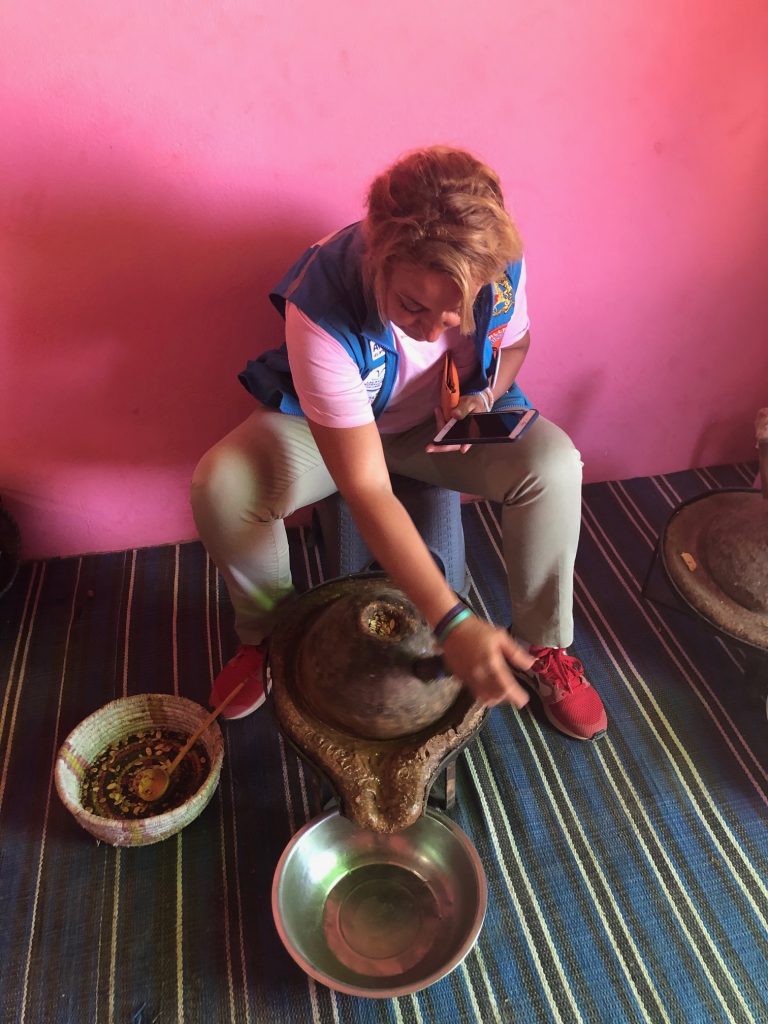 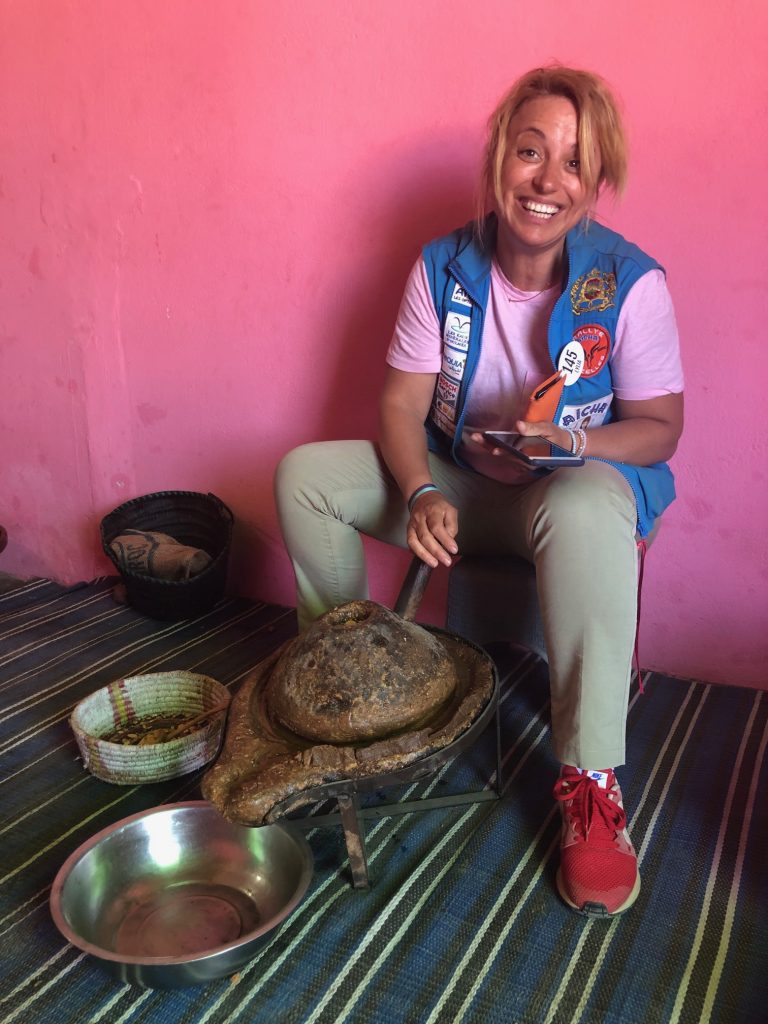 Then it was back on the road, all the way to Essaouira, where our next objective was to find Jonathan, who would/should be waiting there for us. We we among the first Gazelles to arrive at our hotel, and once logged onto the WiFi, we could make some long over due phone calls! 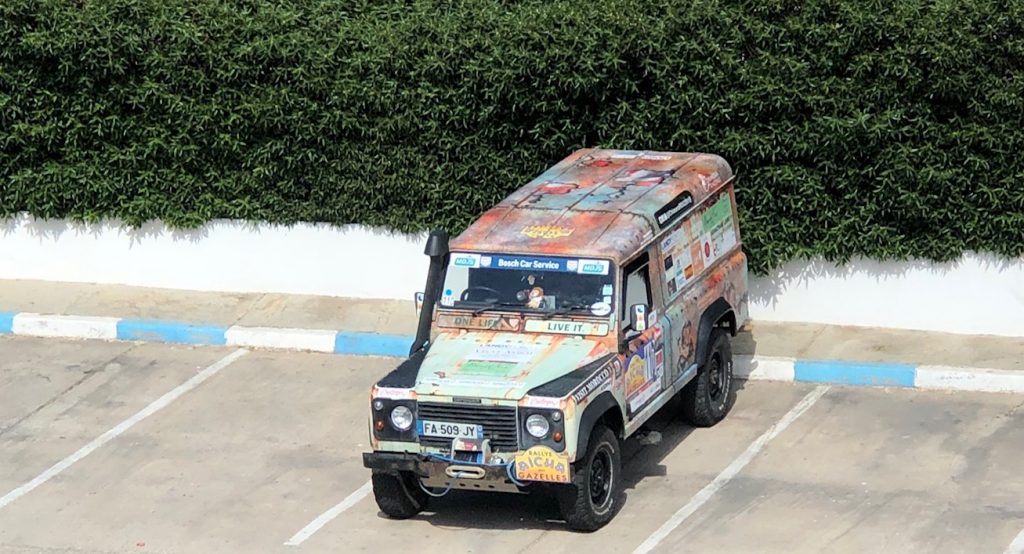 Pick of the parking spaces!

I Facetimed mum and dad, and the conversation went something like this ……

Dad; So what happened then?   Me; Oh gosh it was so much harder than I imagined! Those little red flags are a bit like needles in a haystack …..   Dad; except you couldn’t even find the haystack …..

Harsh. Not really true, and to be honest not really what I needed to hear at that moment. Coming to terms with everything that happened on the rally would take many weeks yet, but equally I didn’t really feel any praise was due either.

That night there was a meal laid on for the Gazelles with music around the hotel pool, but it was quite cold outside, and we still hadn’t managed to make contact with Jonathan which was bothering me. I didn’t know if he had even made it to Essaouira, as the last contact we had had before the rally had seen him in Italy with his brother.

The next morning would be another early start ready for the official finish on the beach, so time for bed …..