Most other mornings on the rally, I had woken up really cold. On this morning I was boiling up! Clearly still not well.

In this photo taken at breakfast you can see I had ditched some of my habitual morning layers! 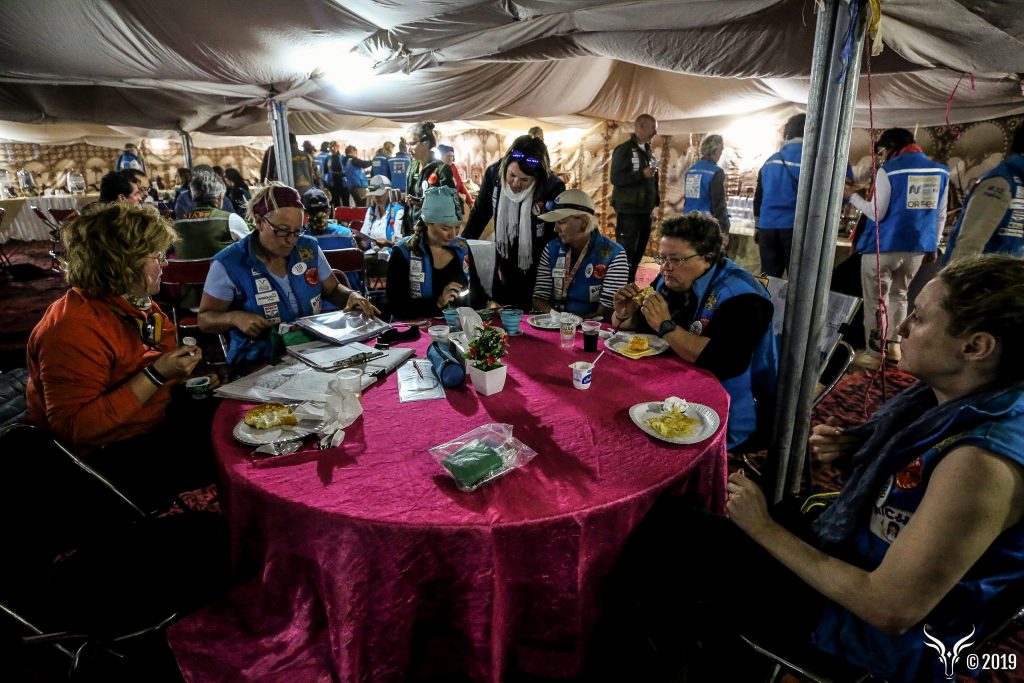 Now I look at it, we all look at bit gloomy!

So, the final stage of the rally was upon us; another Marathon stage.

This morning also saw a momentus day for Priscilla as she turned 21! In celebration we put some fairy lights in the windscreen,  and collected our half bottle of Tsarine champagne as we passed the start of the stage. All the teams were given this for their final night of competition in the rally. 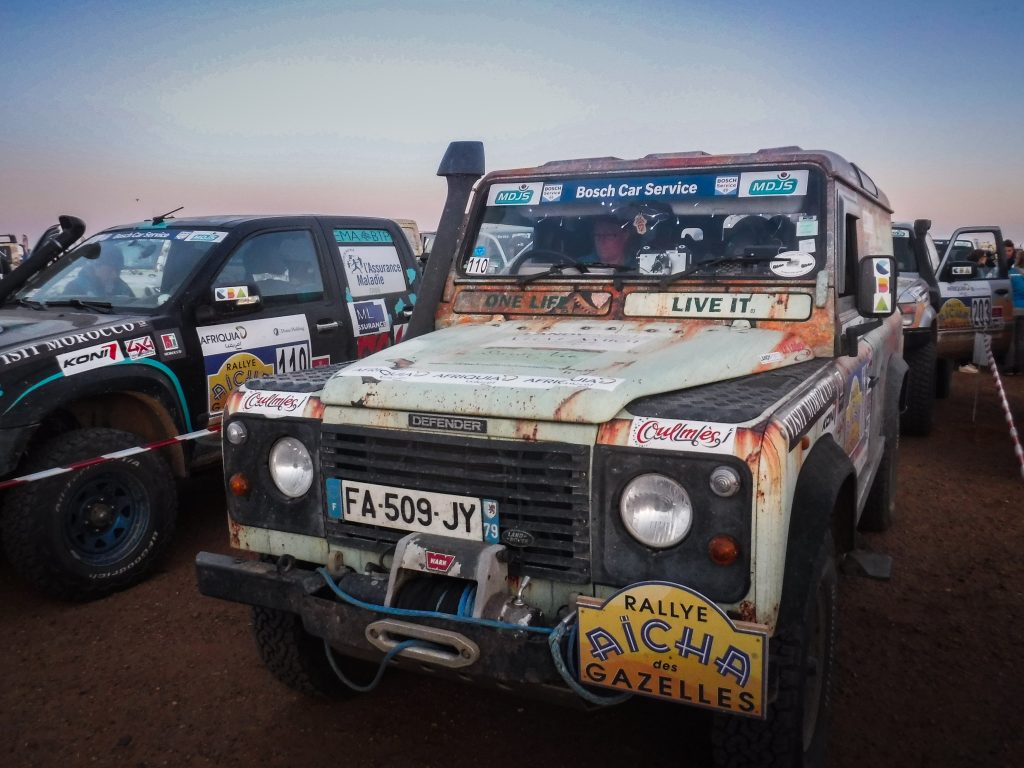 Our first checkpoint was off to the west, and the early part of the drive was over open rocky ground with a few shrubs and shallow gulleys. As always, its a strange phenomenon that so many cars can be heading in more or less the same direction and yet so very quickly you are alone. 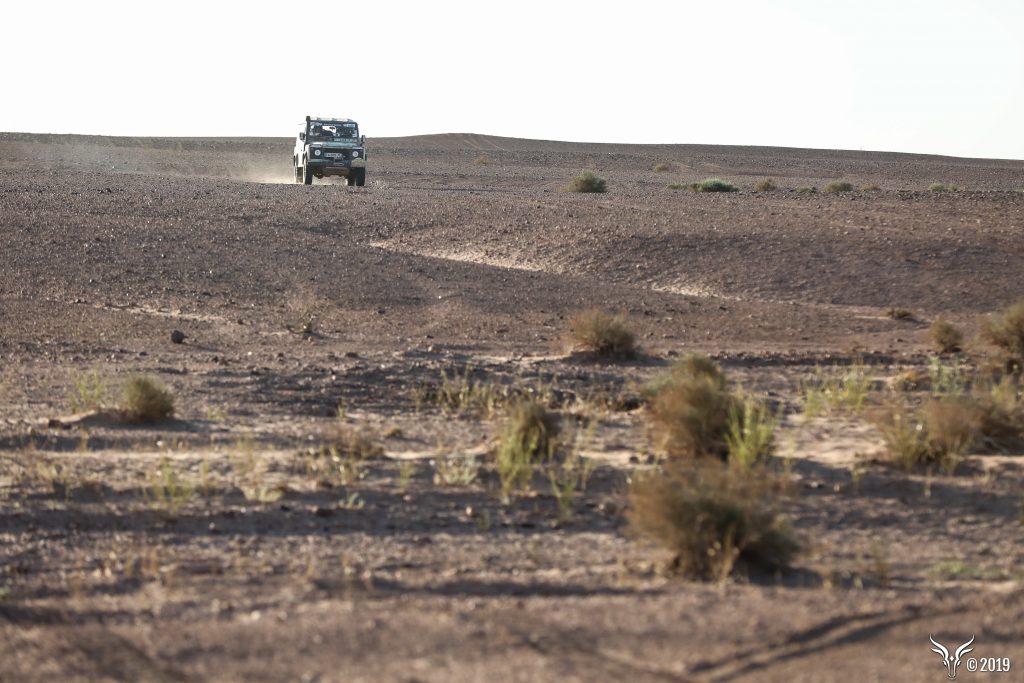 Kicking up a bit of dust 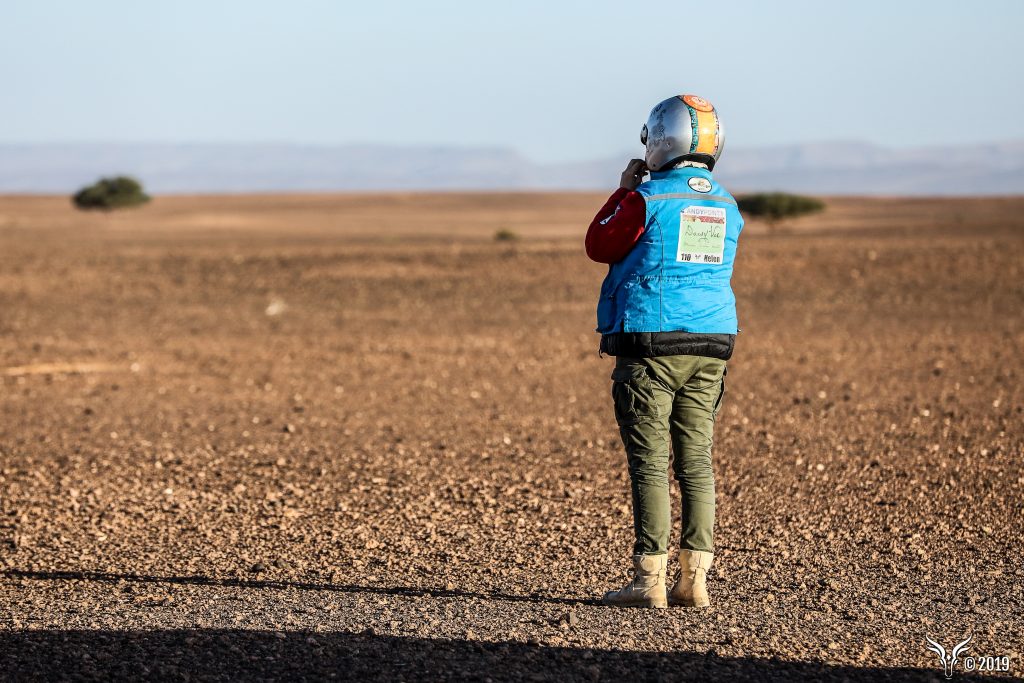 Checking the heading – and clearly being cold again as the layers have re-appeared! 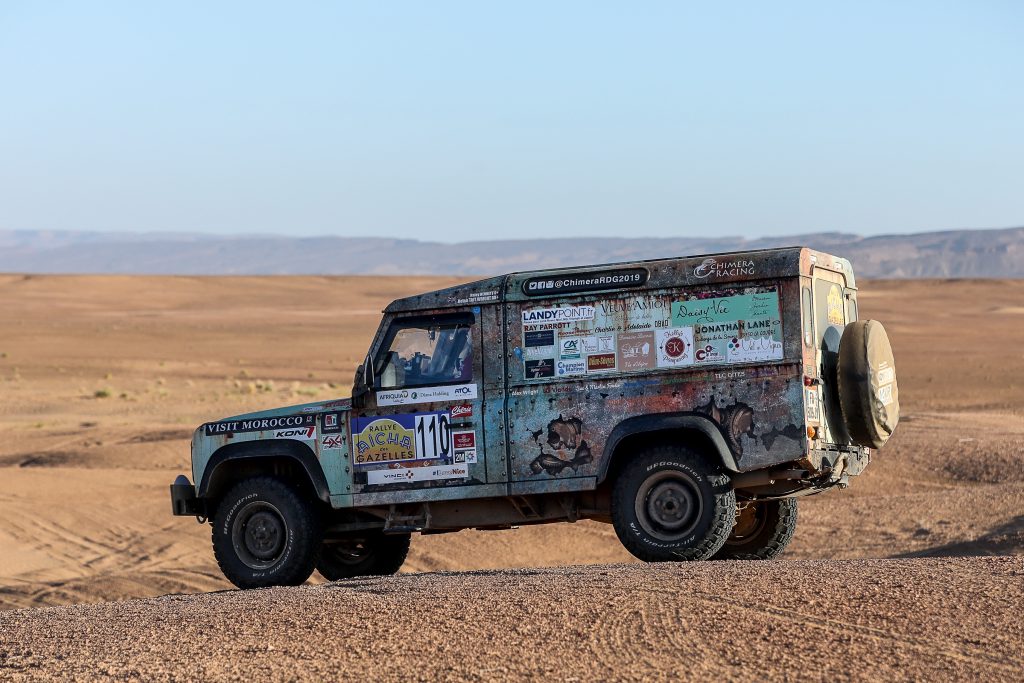 Surveying from on high

After a while we crossed a few small dunes and passed some desert camps, and camels being led out for the day. The closer we got to the mountain range the more vegetation appeared. 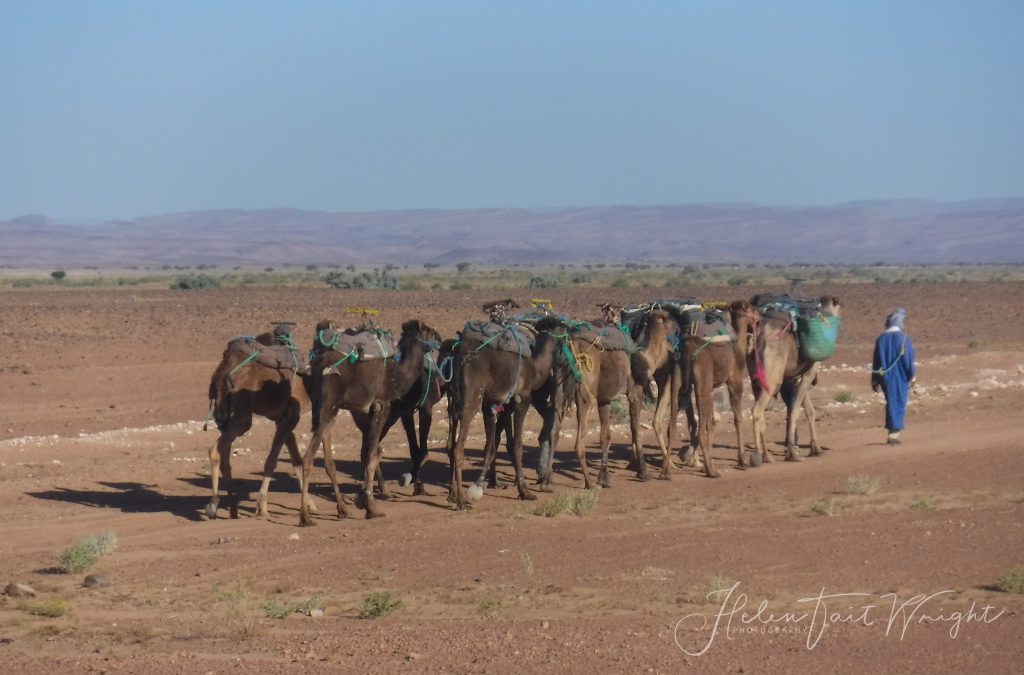 Our team navigation issues hadn’t miraculously healed themselves unfortunately, and the first checkpoint we came to wasn’t ours – we were too far to the left. I would just like to say, we weren’t far away, maybe a km or so, which in the terrain isn’t far, but we didn’t seem to be able to hit it head on. So frustrating.

Having validated checkpoint 1, concealed in some trees, and received the rest of our co-ordinates, we set off again. So far it was going relatively well aside from a few cross words about tyre inflation! As we headed to Checkpoint 2 we arrived at another band of sand dunes and came across one of the VW Amarok teams stranded in the sand. Of course we stopped to help but in getting to a position where we thought we could tow from if necessary, Priscilla also became stuck.

The VW girls were exhausted and tearful and said other teams had driven past and not stopped. It took us quite a while to extract them during which time we appreciated the rigid sand ladders we were carrying as opposed to the flexible ones they had. Digging the Sahara sand is a bit like trying to move water with a spade as it is so fine and runs back. I was really struggling to breathe too, coughing and back in the hot zone!!! During this extraction an organisers vehicle turned up to our side to oversee from afar. They are not permitted to help.

After what seemed like ages the VW girls were back in the game and they stopped to help us too. Luckily Priscilla wasn’t as far in. I remember pausing and eating after that – another can of some slimy fish based stuff. All our lunch meals seemed to be tuna, which I really don’t like. Another of Ivy’s circles of hell!

After that we carried on through the sand. The dunes weren’t that big at all, but we were struggling. Fully loaded Priscilla was heavy and we were digging out of every other dune.

Then we came across a team who were about to be extracted by the organisers. They had destroyed their gearbox. They were absolutely devastated, and I suppose because my emotional state was pretty fragile by then and I was pretty low physically, it really affected me. I was distraught for them and couldn’t stop crying. But there was nothing we could do to help them, and we had to go on.

I think it took us about 4 hours to cross that sand in total, and somewhere in the middle of it we made the decision to head for the red and white mast we could see in the distance as it was likely to be near some civilisation, and something resembling a track, or maybe even a military installation as we hadn’t seen one of those for a while !!! 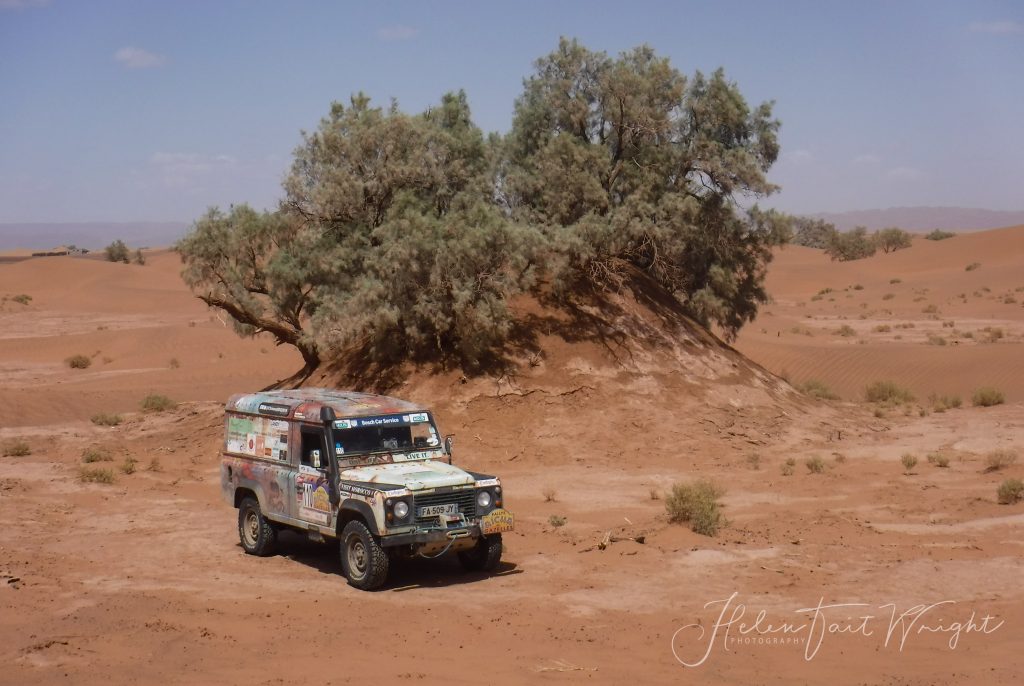 Getting to the edge of the sand, we hope!

However we still had to actually get out, so we had to carry on. We were aware that the organisers weren’t far away, they were keeping tabs on us. 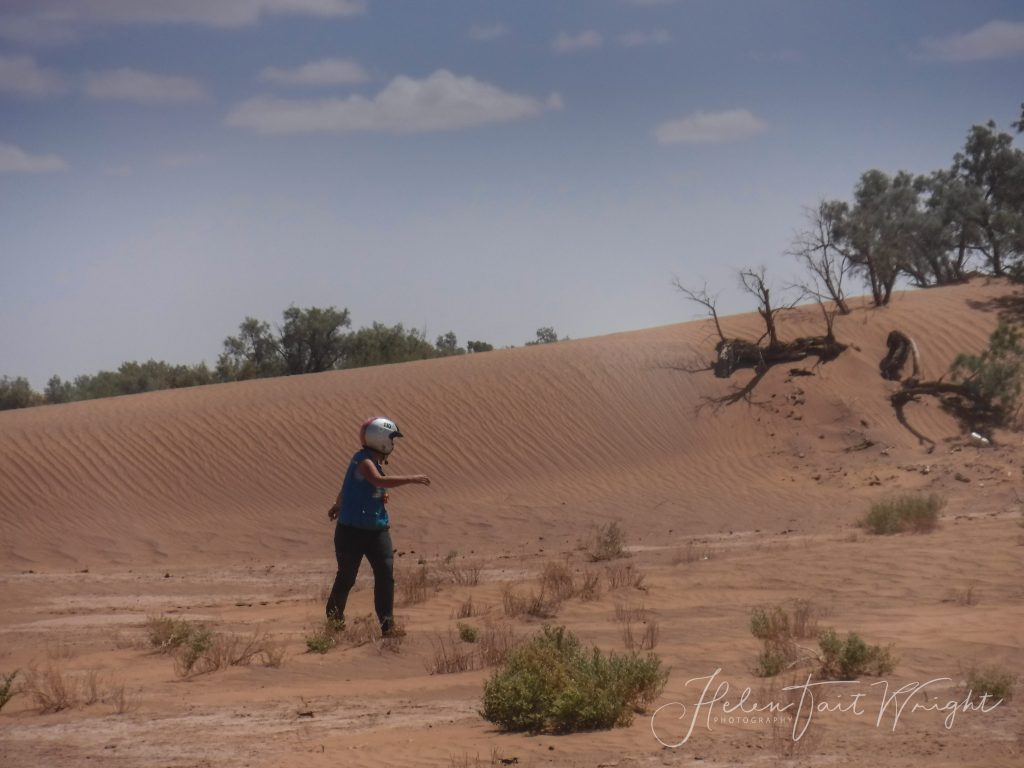 Eventually we came out of the sand and followed a track to the mast. It was a military installation, which we had a good laugh about, and it was on the edge of the town of M’Hamid.

At this point we had two choices. To try and find our way to the “Get out of Jail Free” checkpoint that would allow us to continue the next day, or abandon and head for Foum Zguid and the final bivouac. Either would allow us to finish without being disqualified, although ranked at the bottom of the field, which in all honesty was pretty much where we were anyway.

As we sat tipping the sand out of our boots and consulting the map, the organisers car came up and they asked us what we had decided to do. With the dunes of Chegaga on the route for the stage and bearing mind the difficulties we had already encountered, we decided to head for Foum Zguid. The decision brought a relief of sorts and having made it we at least had a plan. We knew we couldn’t check into the final bivouac until 1pm the following day so we decided to head back up the road to Zagora and find somewhere to stay. 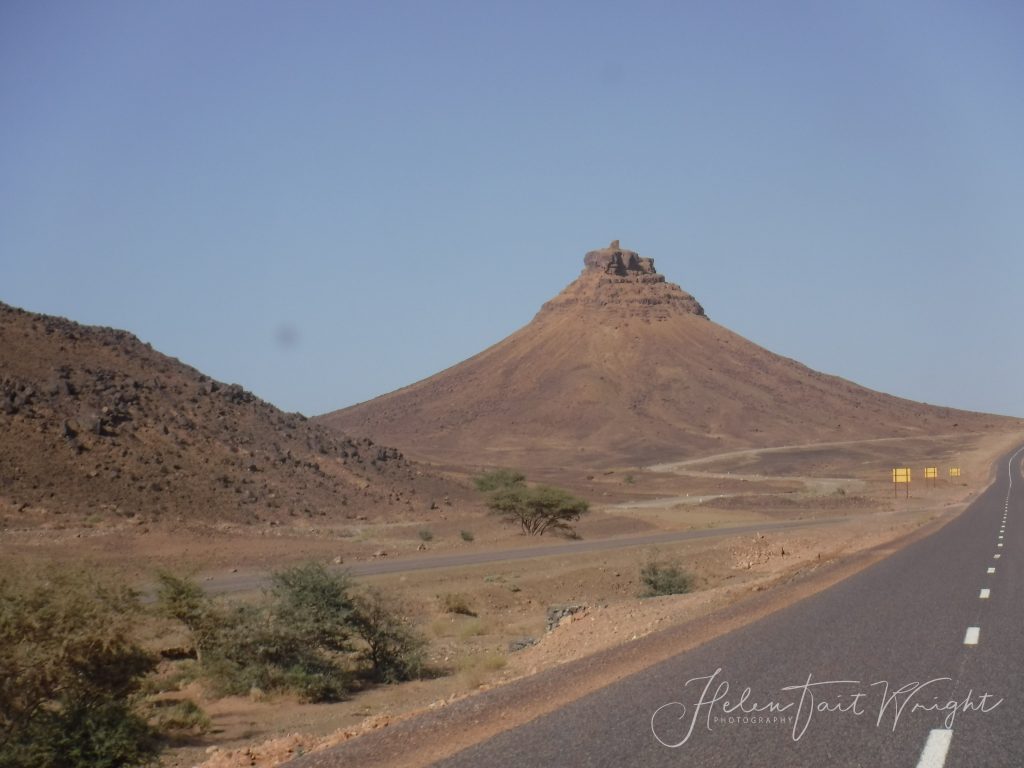 The road to Zagora

On arriving back in Zagora, around 100km away, we checked into the expensive sounding Club Reda hotel. It was actually super cheap and practically empty, which was astonishing. There were over 100 rooms and only 6 guests including us! 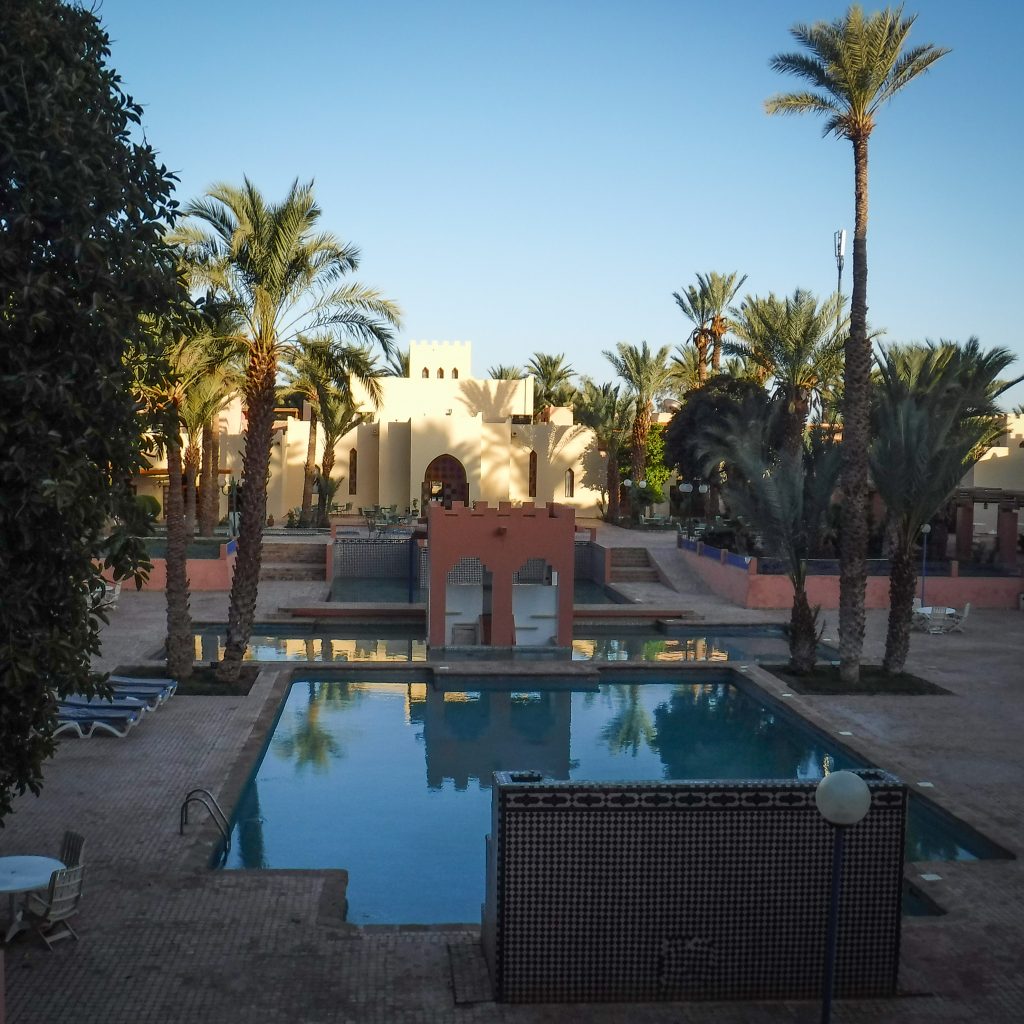 Not too shabby a place to stay!

Rather than drinking our champagne out on the stage, we drank it in a hotel room. Probably not what the rally organisers envisaged. 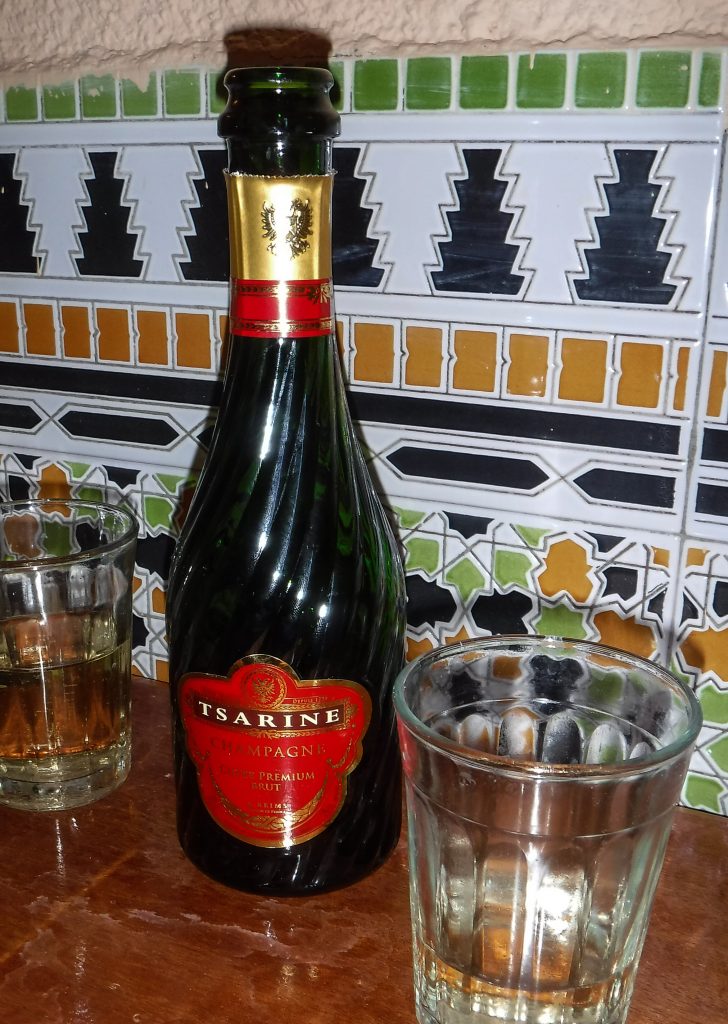 For the guys watching out tracker at home, and having no idea what was going on, there was some concern about where we were, but apparently the tracker for Team 206 was also showing up in Zagora. This was the car we saw being recovered from the dunes with a broken gearbox. We saw it on a recovery truck in town the next morning.

After a reasonable nights sleep, breakfast and a good reorganisation in Priscilla, we went into town to get cash ready for the next part of our trip and then set out on the road to Foum Zguid, a couple of hours away.

I was starting to feel much better, and was back in the driving seat.

We got to Foum Zguid early and sat for a while eating the last of our rally rations before taking the track to the bivouac. We had discussed our next move on the journey. Ultimately the next stop was Essaouira for the official rally finish, and that was a minimum 9 hour drive away. We could hang around all afternoon at the bivouac and camp overnight, or leave and get some of the journey under our belts and stop on the way. We decided on the later option as we felt we could enjoy the journey more.

But first we had to officially finish! 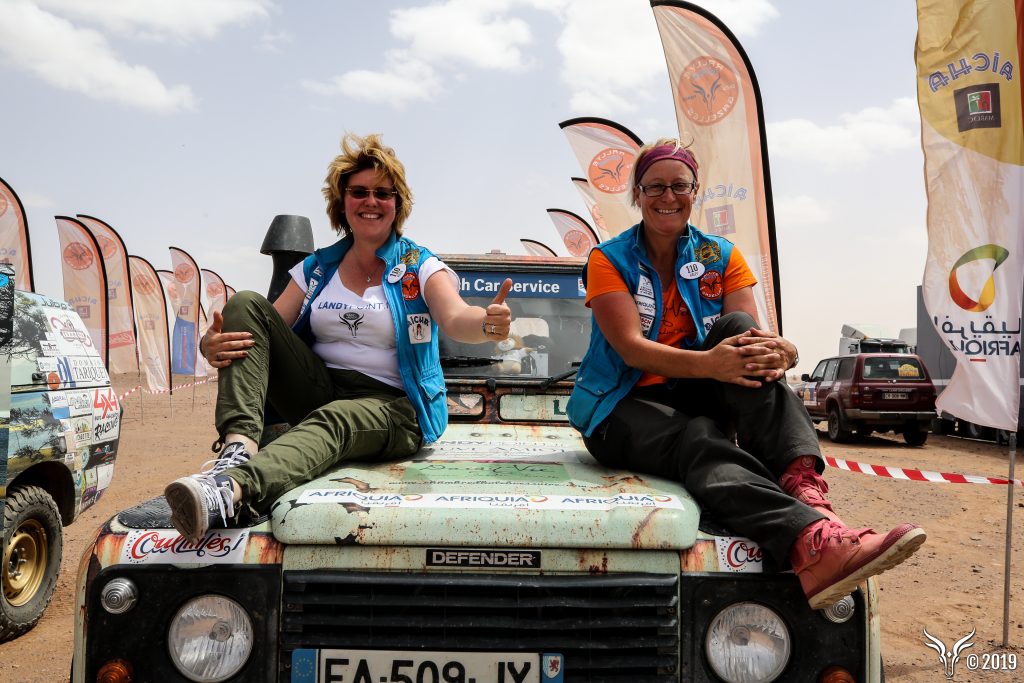 The last time we cross the finish line!

With all our paperwork signed off and the photo taken, next we had to have the tracking equipment taken out of the car, and exchange that for our mobiles which had been with the organisers since the end of the prologue. This took sometime as there was a bit of an emergency going on with a Gazelle being stretchered away to the helicopter. I’m not sure what had happened, but they were taking no chances. I hope she was OK.

In the paperwork we got with the suggested route to Essaouira, it mentioned a voucher we needed for our hotel there. We didn’t have it so went to find Karine to ask about it.

What happened next got a little heated as she said “I don’t think you are allowed to leave now” and I told her in no uncertain terms that if I wanted to leave I was damn well going to. Karine, if you ever read this, I am sorry I shouted at you.

Anyway, back in possession of our mobiles, we headed off to find a place with signal to check in with folks at home and see what my sister had been putting up on our social media accounts! 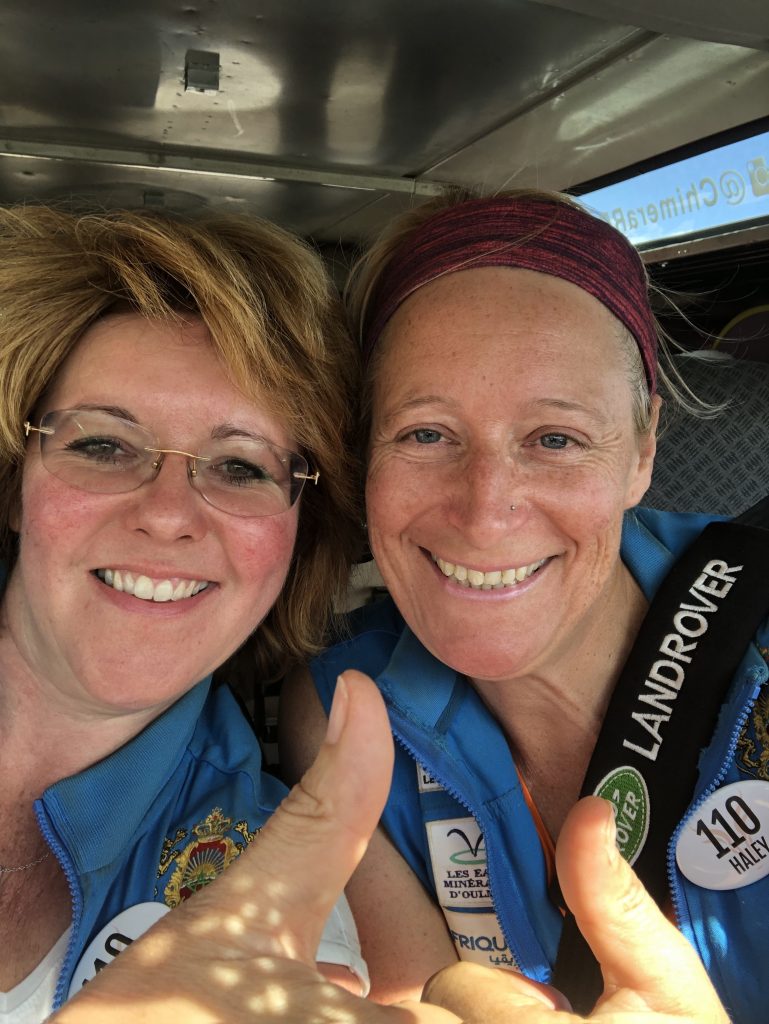 Then we hit the road. I really enjoy driving and find it a great way to wind down, so it was nice to just drive. All the way to Taroudant.

We had a bit of drama finding a hotel which involved frayed tempers and driving around in the dark, but we eventually settled on the rather lovely Dar Zitoune, a most excellent choice! Our very dirty and dusty bags were taken to our room by a porter, in stark contrast to a normal rally night in a tent, we ate and slept well, and woke refreshed and ready for the next part of our journey.

I’m not especially proud of our decision not to continue with stage 6, but the reasoning behind it really underlined the need to lose weight in the car, and or improve the power to weight ratio. At that point however attempting another rally was far from my mind!