Day two of the first marathon stage dawned, as all days do ……

No queuing for the loo this morning, simply head up the hill and find a quiet place! One of the most asked questions is “What do you do about going to the loo?” Well, you just go! As a Gazelle wild wees are the norm during a stage !!!

No briefing or breakfast either, aside from what you have with you. Tents still need packing up though, and a bit of re-organisation in the back of Priscilla, a rare luxury. My cold/flu had not abated, still felt like s**t.

Anyway, first things first, get checkpoint 5 validated. Then off towards checkpoint 6. This point was very close to the Algerian border, which is a definite no go zone, so we had to keep our wits about us. The route there wasn’t too bad, and thanks to Haley’s sharp eyesight, spotting the momentary flash of the red checkpoint flag in the distance from a high point along our route, we found the point without too much trouble. 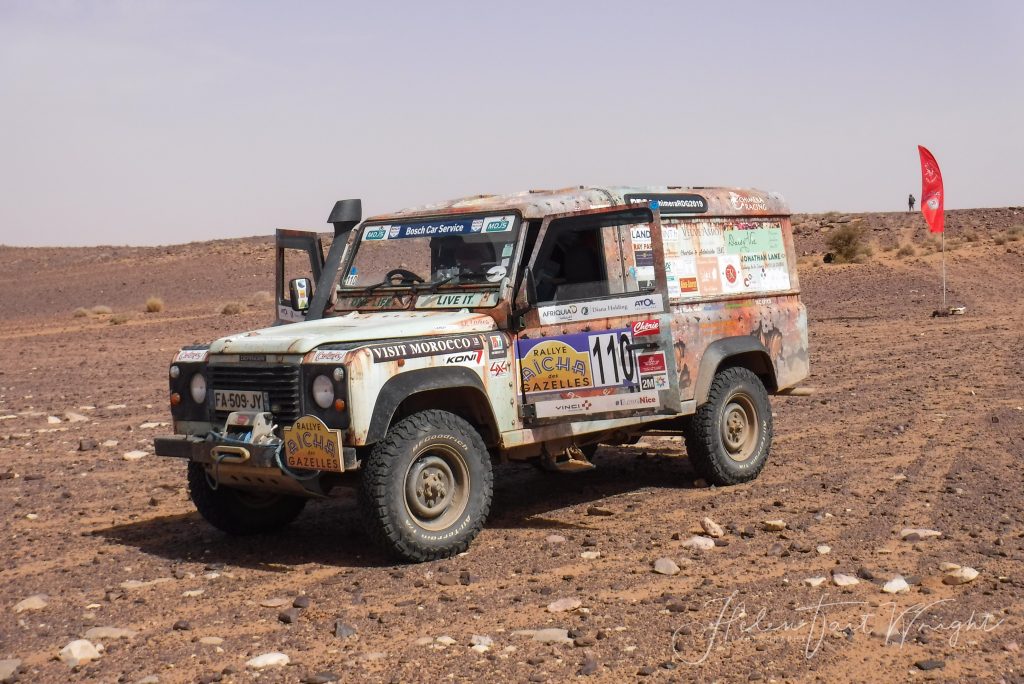 These little red flags are a welcome sight, trust me!

It fascinates me how three photographs taken at the same spot can be so different! The mountains you can see are in Algeria and on the photo below if you look carefully you can see a border post. 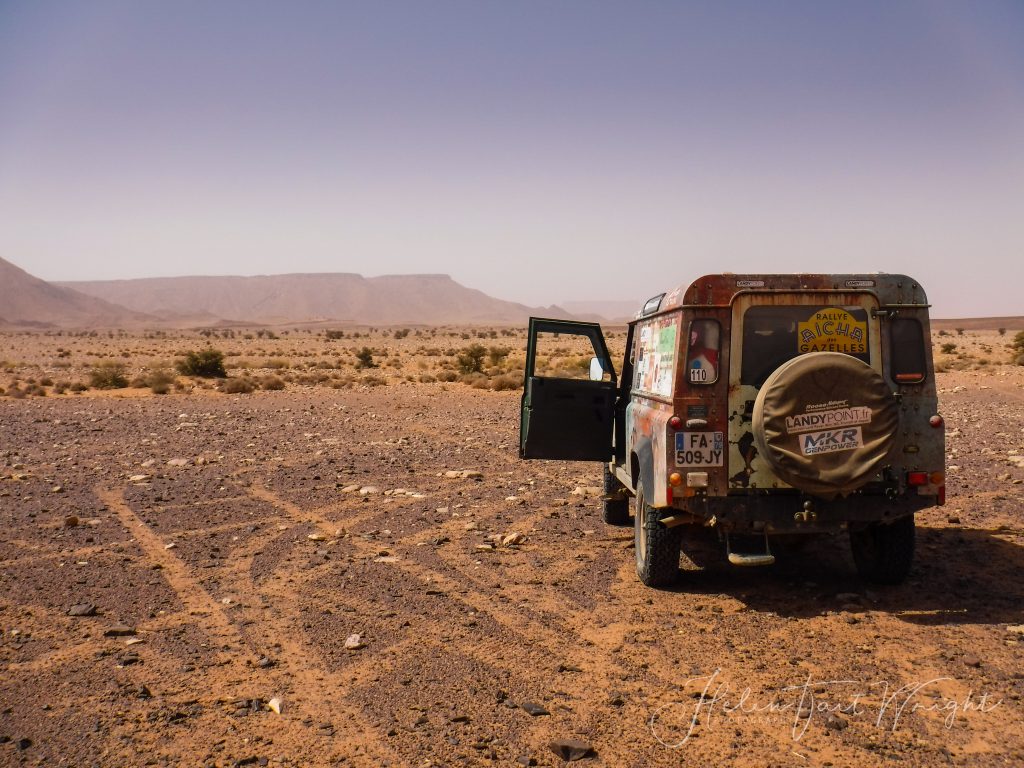 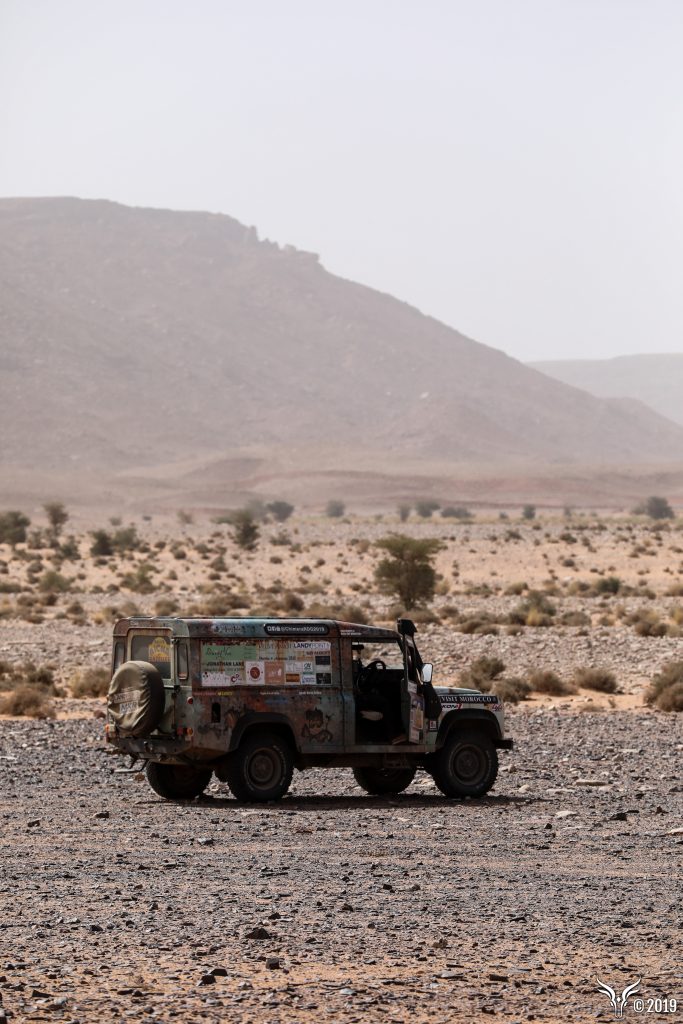 Checkpoint 7 was quite away away but we set off, aware that once again the clock was going to be against us.

The terrain is so open and vast it is difficult to describe. Not much sand here, but lots of the scrubby ground with small rocks that shakes you and the car to pieces. Meanwhile the used tissue mountain was steadily growing in the car, and I was getting very worried about giving my germs to Haley. We couldn’t both afford to be ill. 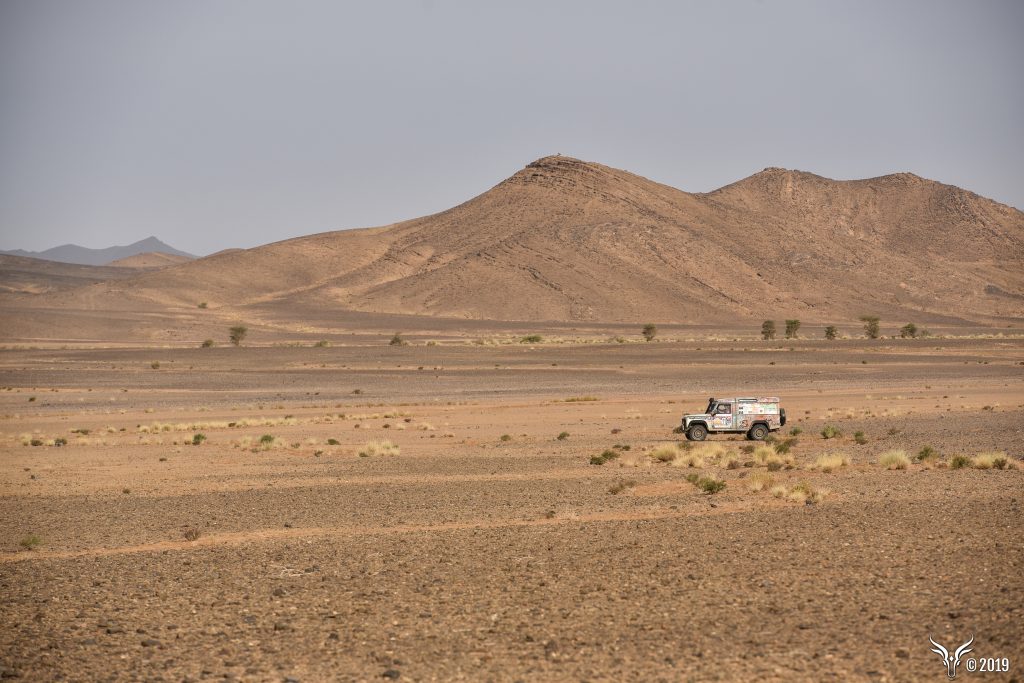 Eventually we came to a military outpost. Moroccan luckily! And as if by magic other Gazelles cars appeared. (We weren’t all attracted by the soldiers and their Hummer, honest!) After a discussion, and with the time running really short, the others made off for a dash to see if they could reach checkpoint 7 – I’m not sure if they made it – but we decided it was unrealistic and decided to head for the next bivouac.

This does not mean you can stop navigating or concentrating! You are in the desert, and you have to get out! Also, it was a really long way to the bivouac location.

We chose our route and set off. During this drive we had an amusing incident with a navigation point. As there was more vegetation around, we got our heading and picked the tree on the horizon we were heading for. Great. We were doing well until the “tree” got up and walked off! It was in fact a resting camel, but for all the world looked like a scrubby tree from a distance. We did have a good laugh over that! 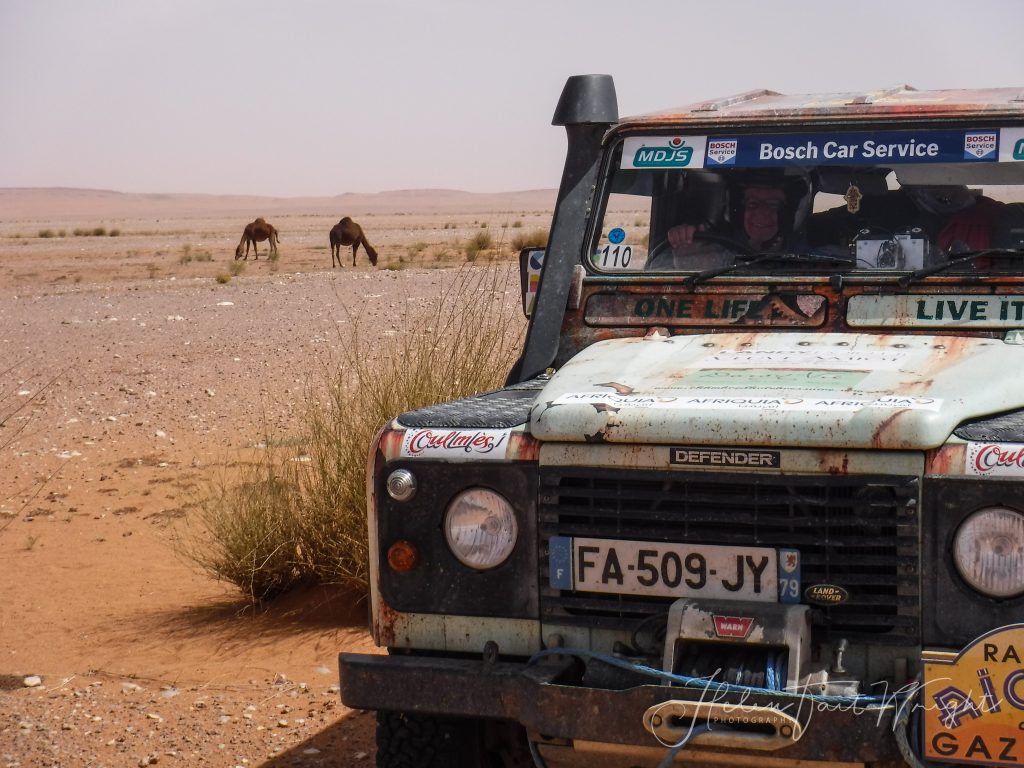 These ones weren’t navigation points!

As we came close to a small village, where we hoped to pick up a track heading towards Zagora, we started to pass more signs of life ….. I loved seeing the herds of goats, they are such funny little things. 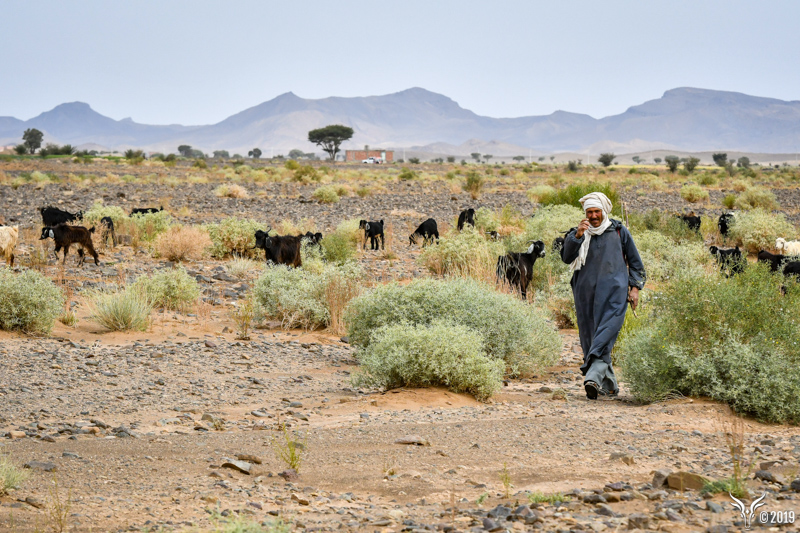 On the edge of the village we started to see crops being grown in fields and I climbed a bank to find a man tending a reservoir. The people were all so friendly and lovely, and it is one of the reasons I adore Morocco.

Even well used tracks such as the one we were looking for are hard to spot when you are approaching at right angles, but the track we needed had the advantage of a signpost where we came to it. Not that the signpost was much good as it was written in Arabic !!! As we were verifying our position, one of the Rallye organisers vehicles came along, so we knew we were going the right way! So off we went, on the track to Zagora ….. 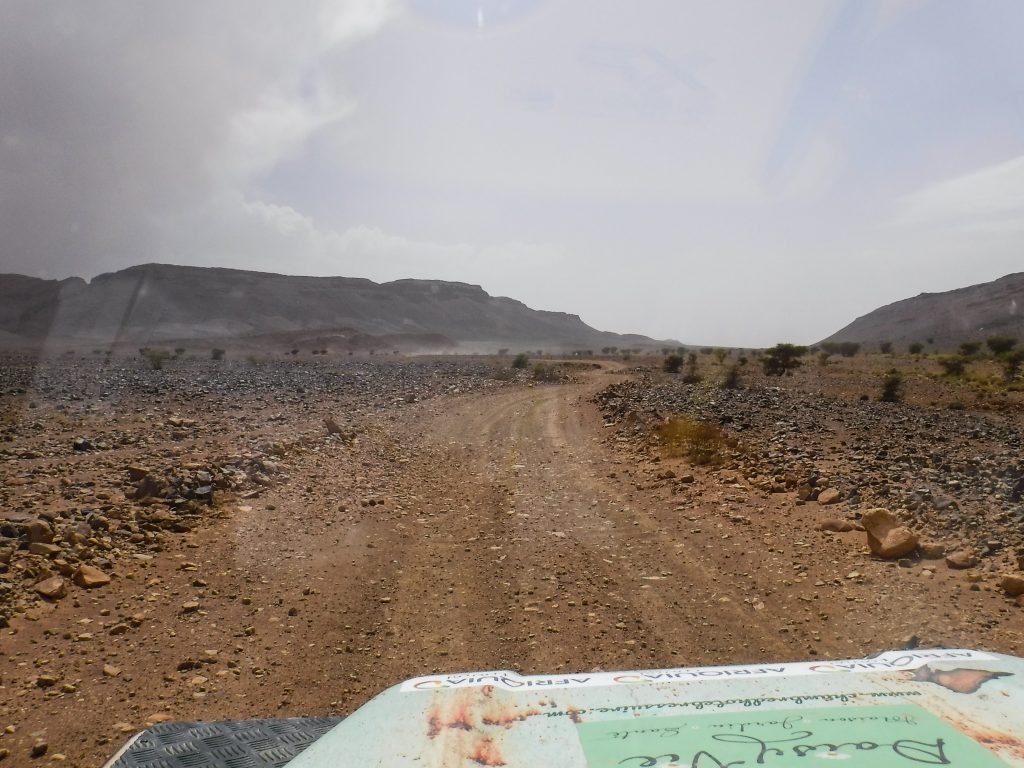 The track to Zagora, with the dust from the rally organisers vehicle ahead.

On the way we passed the transporter and air conditioned bus that moved the Gazelles in the electric cars around. They have a much more cushy time than the rest of us due to the cars needing charging frequently, so not being able to cover long distances and the lack of ground clearance meaning the terrain they tackle is much easier. It was a sort of joke that you could tell the E-Gazelles as they were perfectly made up at all times!

Eventually the track became a road and we arrived on the outskirts of Zagora. Now, in Zagora is a man who is almost mythical if you are a Land Rover person or overlander; the legend that is Ali Nassir. So, I was determined to go to his garage. It’s almost like a rite of passage for any Land Rover owner passing Zagora. On a more practical level, I guessed that the oil seal that still needed replacing on Priscilla’s axle would be coming from him, so I thought if the mechanics didn’t have it we could pick it up. I wouldn’t say all the occupants of the car were happy about this, but it was a real thrill for me to finally arrive at his garage. Of course the young lad who appointed himself as our guide through the streets of Zagora took us to other garages first, as is the way! 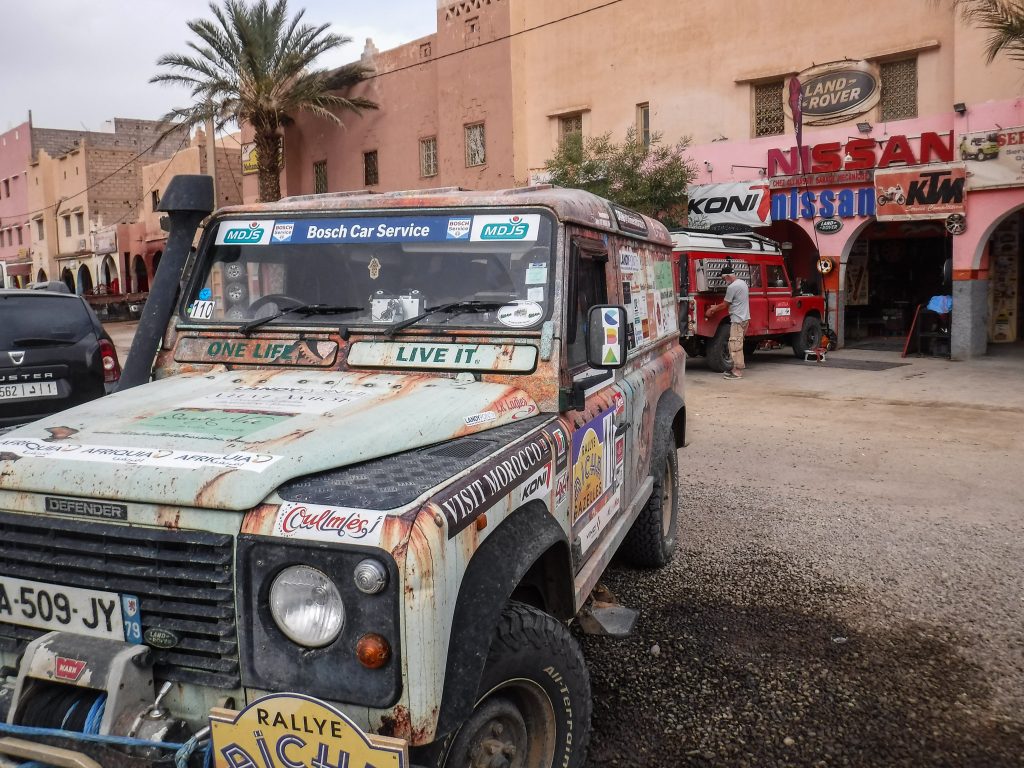 At Ali’s garage in Zagora 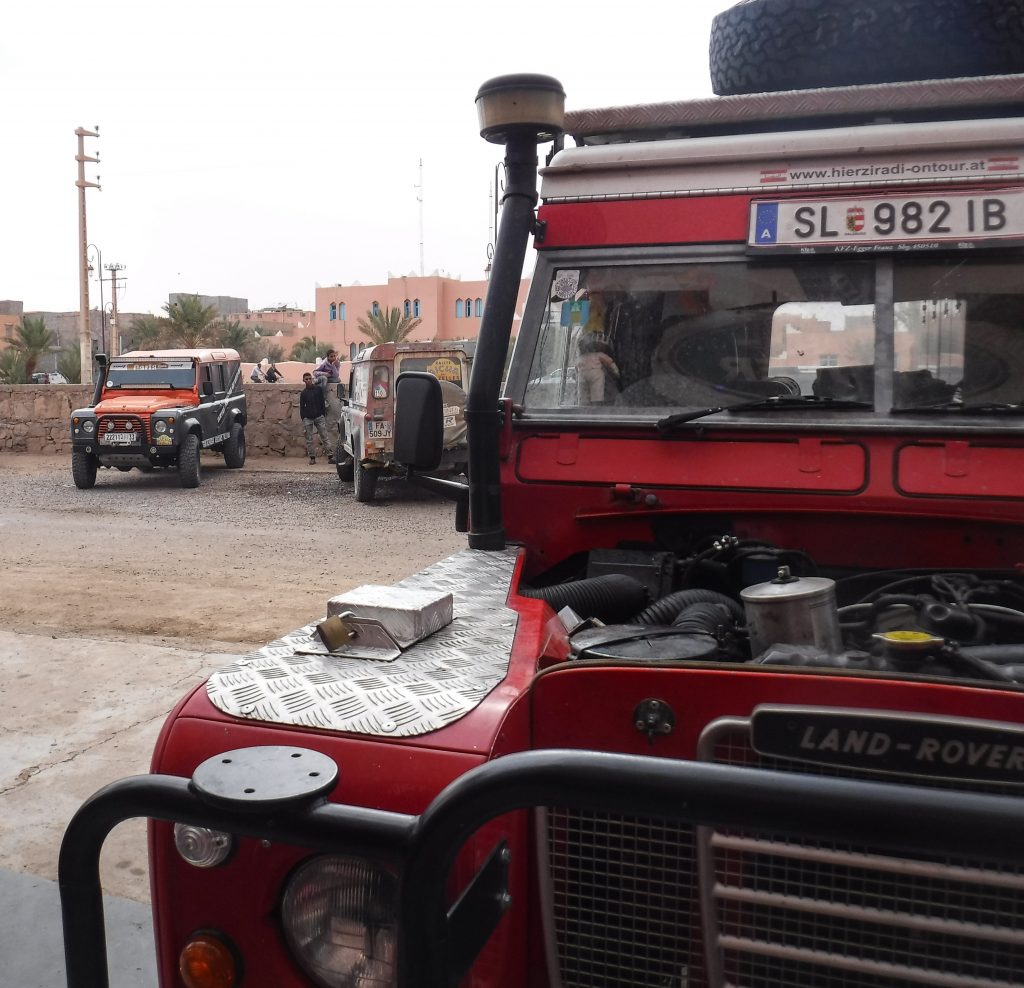 The oil seal had already been collected, but never mind, we met Ali, and that made my day. We also met a lovely Austrian guy overlanding in his Series. The Land Rover world is a small place and all these connections count!

Then it was on to the bivouac. As we left the town the wind started to get up and by the time we reached the bivouac we were in a sand storm. No need for skin exfoliation that day! The deeply unattractive googles we had to take with us got used, and we were thankful for them. 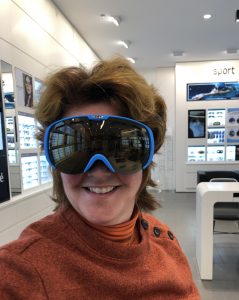 At least they co-ordinate with the rally gilet ! (This picture taken when I purchased them)

Pitching tents was a challenge to say the least, but the 1 hour rule still stood. Lots of packs of water from the water tent was the only way of holding them down while we struggled to get the pegs in.

Eventually the wind died down and in the queue for the showers, all talk was of the next marathon stage and the much bigger dunes of Erg Chegaga. I was getting quite nervous about how we would fare with a fully loaded car ……..

After dinner and a check of our messages it was time for bed. The second marathon stage awaited …..