I think sometimes when the adrenalin is flowing that it combats a lot of things, but having a relaxing and restorative day can actually allow your body to deal with the things the adrenalin has surpressed. So, I woke up for the first day of the marathon with a full blown cold/flu. Streaming nose, coughing, banging head, sweats, the lot. Great. And we had to get up at 4am. Double great!

I just wanted to cuddle up for the day, but of course that wasn’t possible. The best I was going to get was a cuddle with our team mascot Ginny! 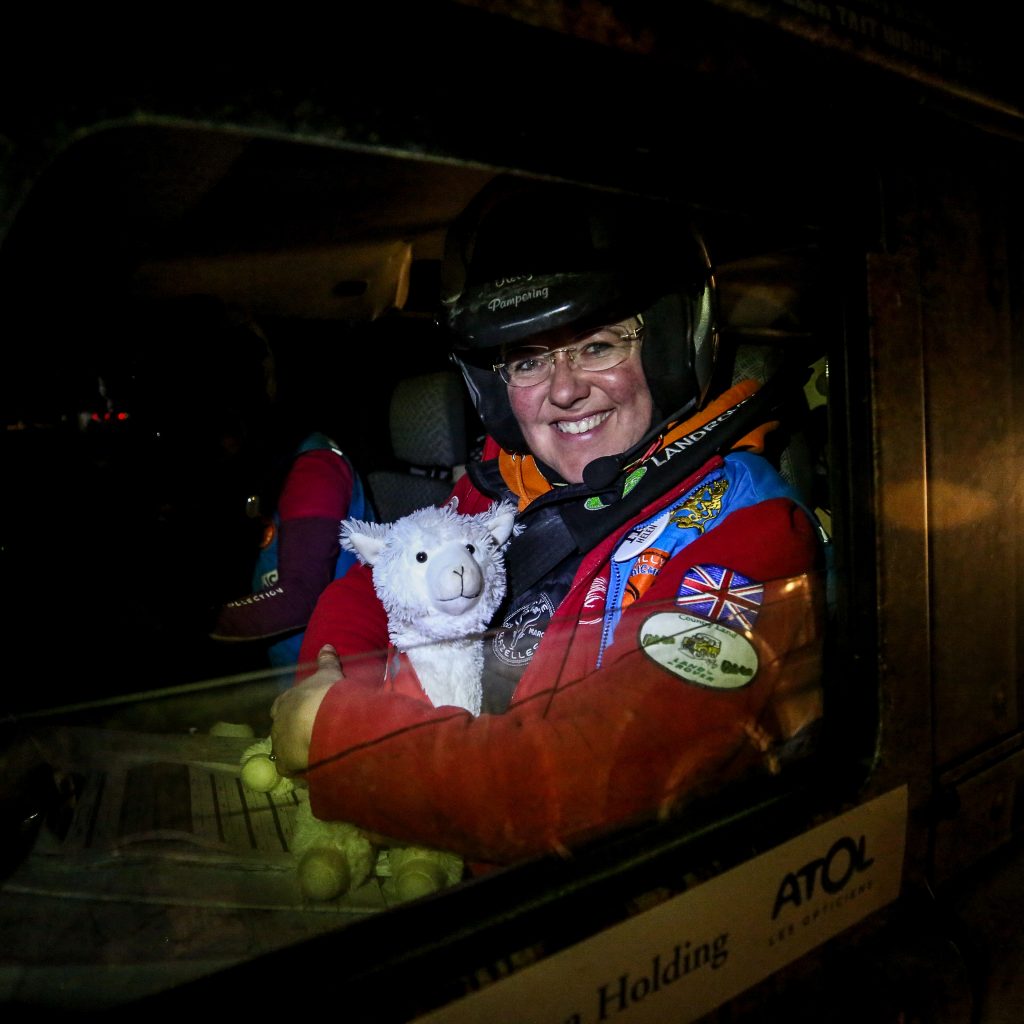 We decided that due to the amount of coughing and nose blowing I was doing, trying to drive at the same time was not sensible, so Haley took Priscilla’s wheel as we set off after breakfast to make the journey to where the bivouac would have been had Stage 4 not have been cancelled.

As is the way with the rally, having arrived at the location, we had to queue for ages as all the cars were getting an extra fuel ration, before we could take our place on the starting grid. As the sun poked its head over the horizon, we were off and heading for checkpoint 1. 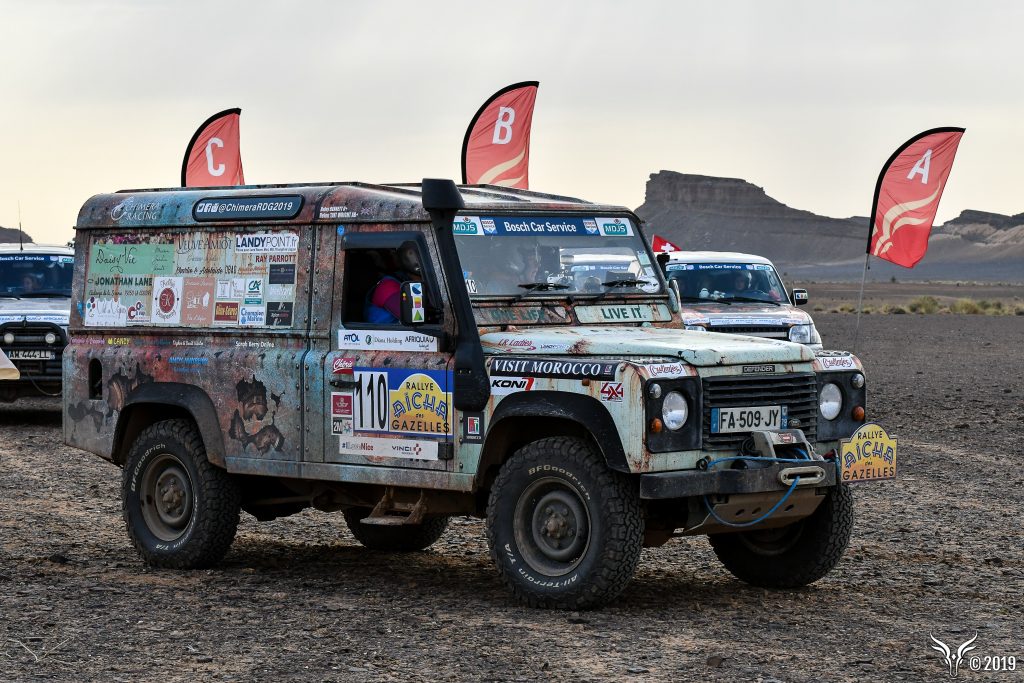 I had the route planned and it all went well, with just one little challenge to get around, which we checked out first on foot. 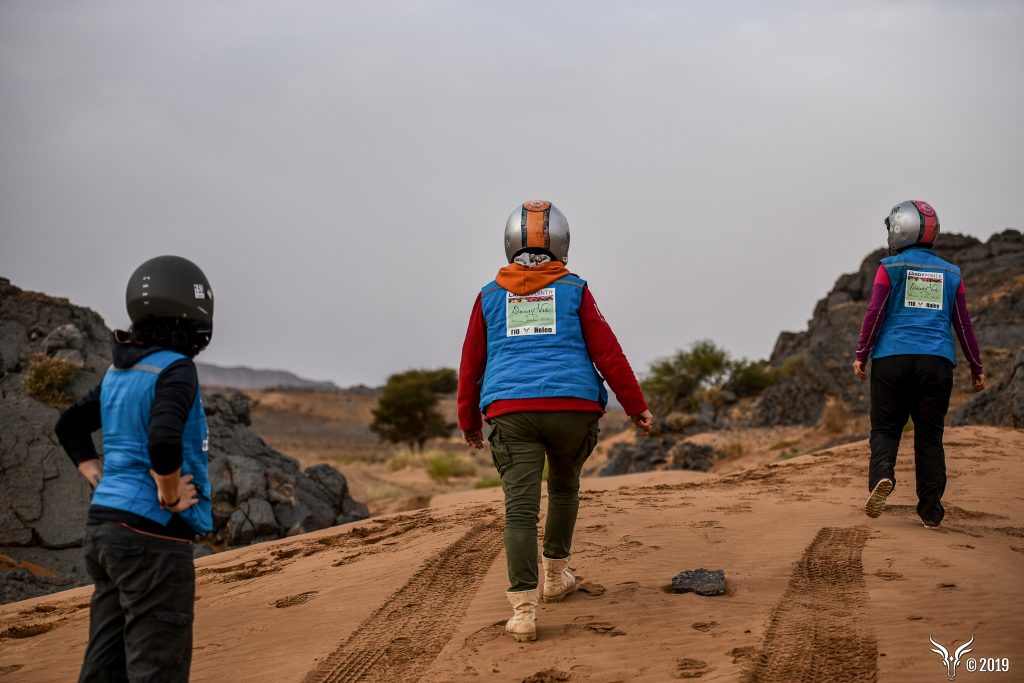 Determining the best way round 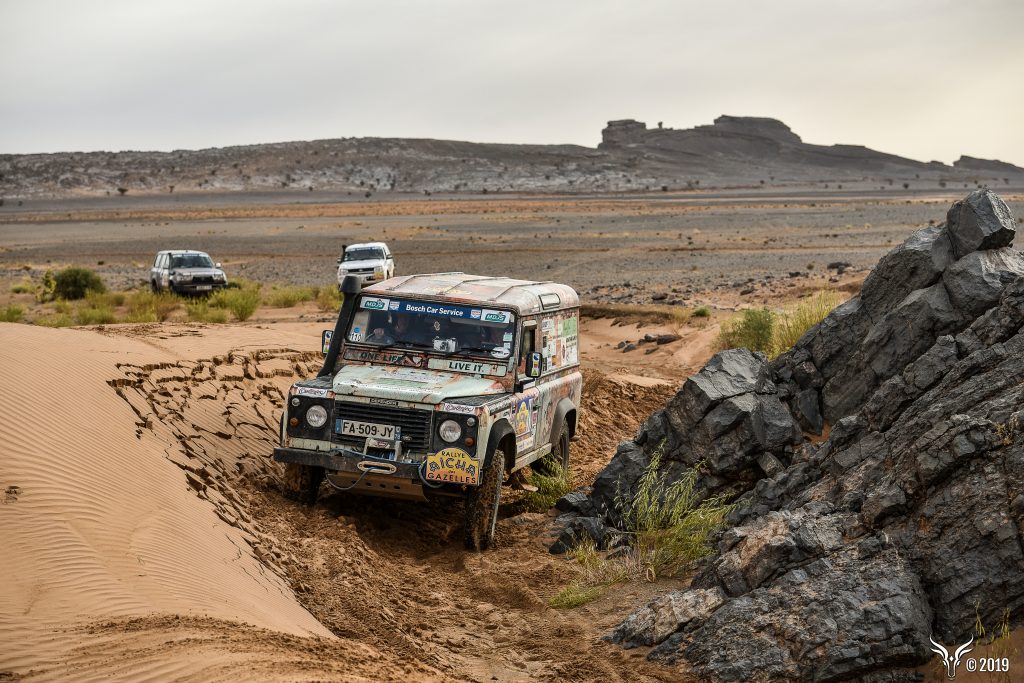 We can do this! Just don’t damage the tyres on the rocks

Checkpoint 1, tick! Then everyone plots the next bit of the day before heading off again ….. 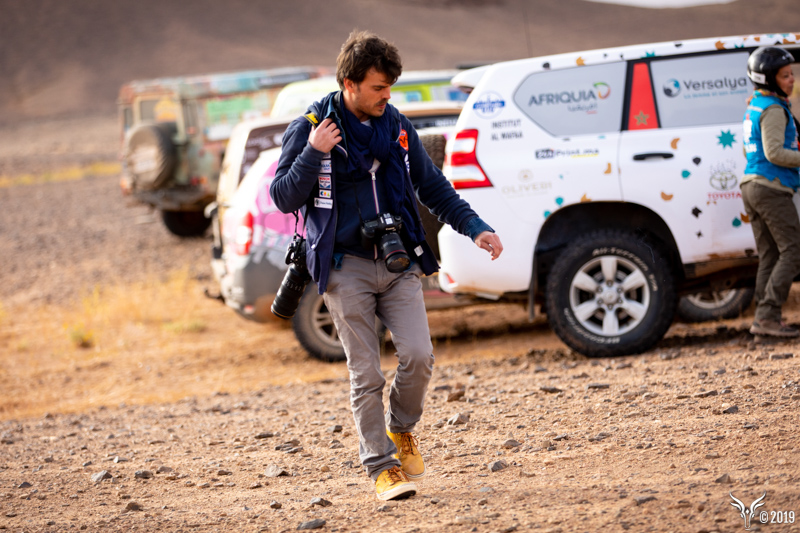 Parked up while everyone plots the next course

Then we headed off towards Checkpoint 2 across open ground, on an old camel track, eventually passing a small village. A camel track is in reality no more than a well trodden path through the desert and the quite weird thing is that they are easy to miss if you are not very alert. But we found this one and were able to follow it easily. 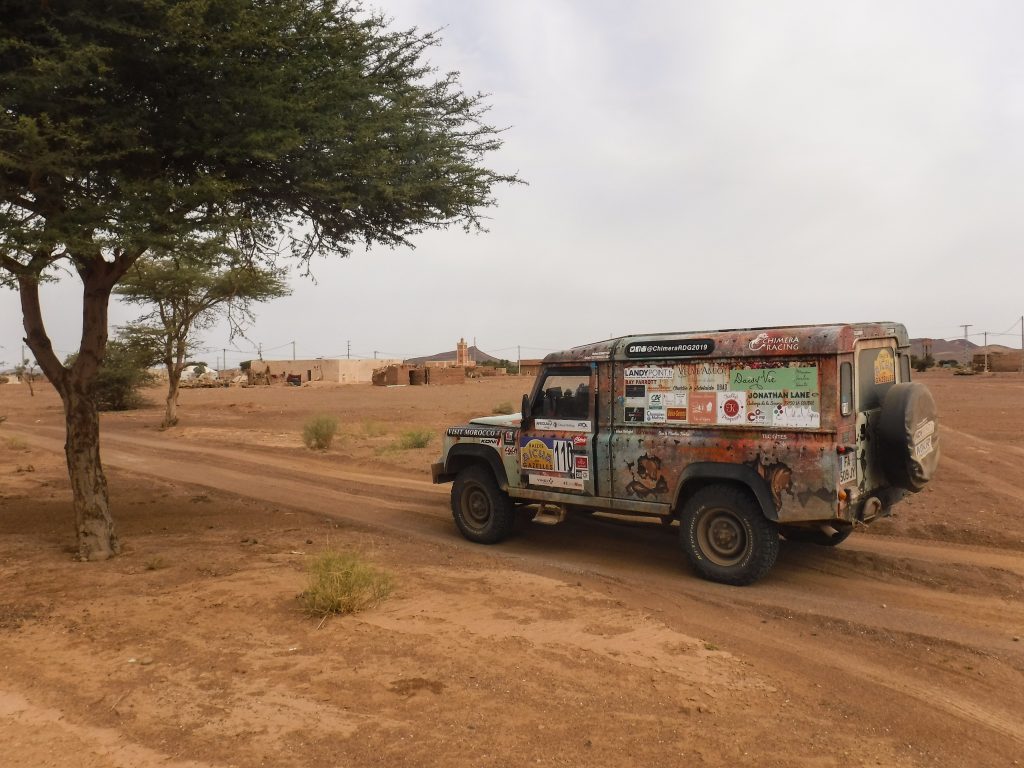 After the village there was a ridge of small mountains to cross which had a lot of rocky watercourse gulleys coming down their sides. By now they were dry again, but still very tricky driving.

In time we came to a place where we could traverse the mountains via a sandy gap. So far so good. And then it all went a bit wrong. Having got through the gap, I was sure that we needed to head slightly to our right for the next checkpoint, Haley was equally convinced we needed to go left. I had been plotting the route, and normally I would have been much more forceful about asserting my reasoning. However, I felt literally like death warmed up, and I couldn’t be bothered. So we went left.

I will kick myself forever for this. It still haunts my dreams. But it happened.

Left wasn’t the right way, and after we had made a substantial detour and then turned back, we passed Checkpoint 2 just after it had closed. Damn.

On a marathon stage you effectively get a “Get out of Jail Free” card. To carry on if you have missed a point, you can go to a pre determined point in order to continue the next day. So we headed towards Checkpoint 5, our continuation destination. 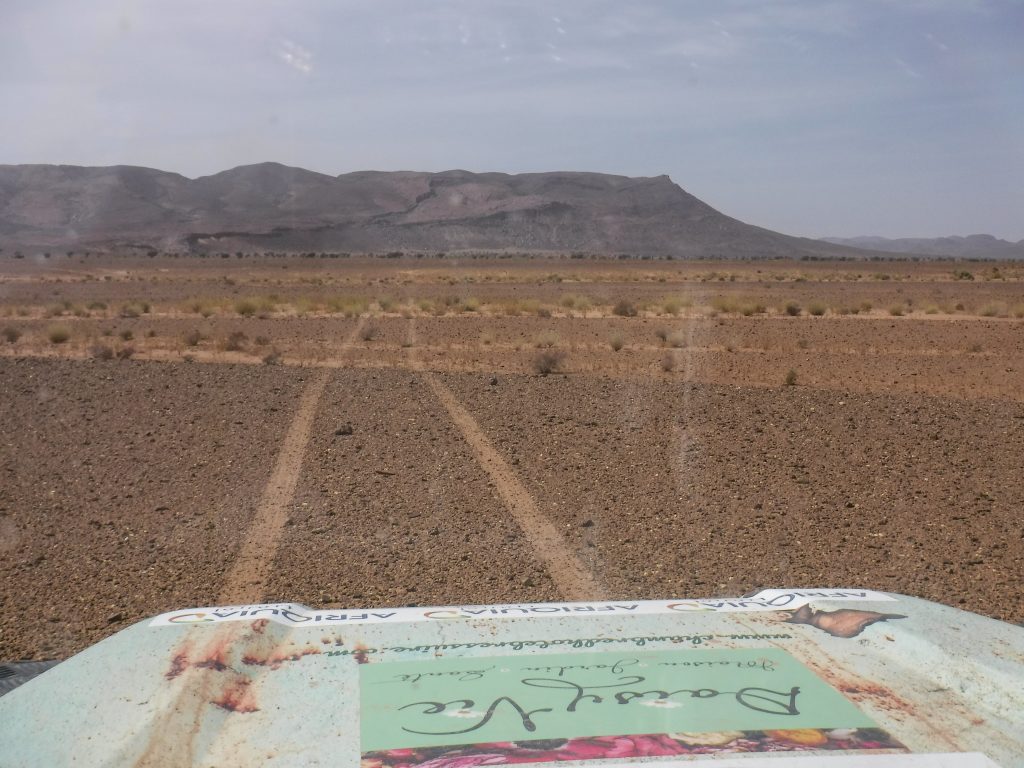 On the way, we passed by a little settlement which had the most surprising patch of wonderful green wheat growing! Quite how they managed that I’ve no idea but it was lovely to see. 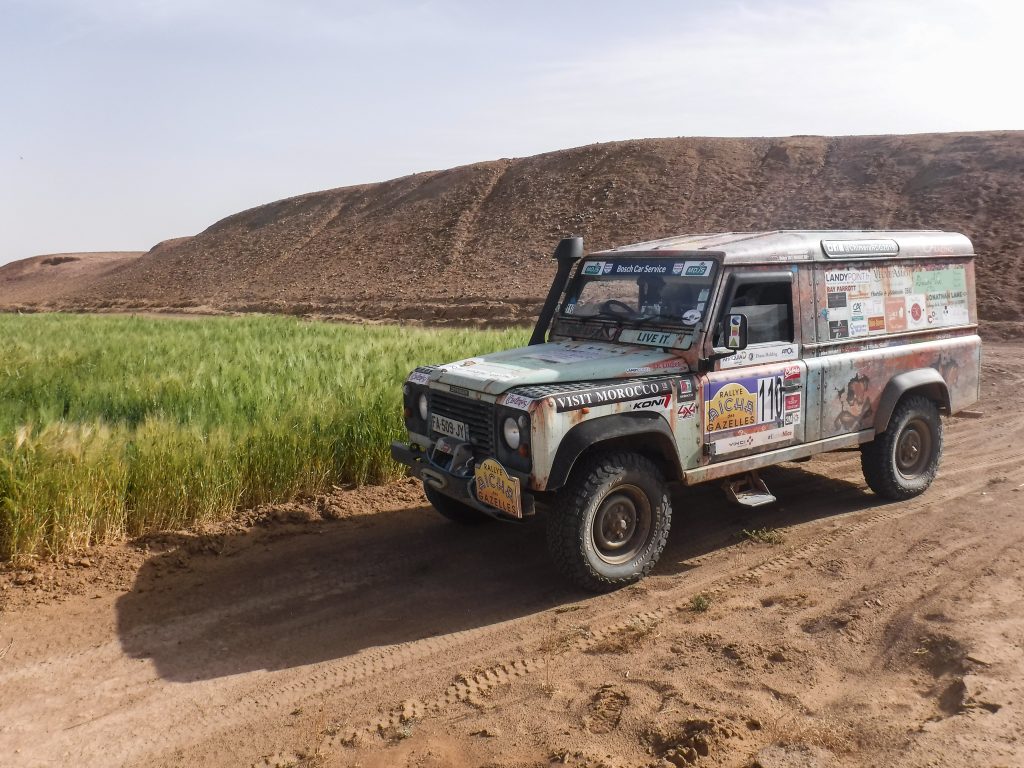 The desert is full of surprises!

It was a long trek to checkpoint 5 and we arrived in time to catch the last of the evening sun. The checkpoint was in a valley with some spectacular rocks ….. 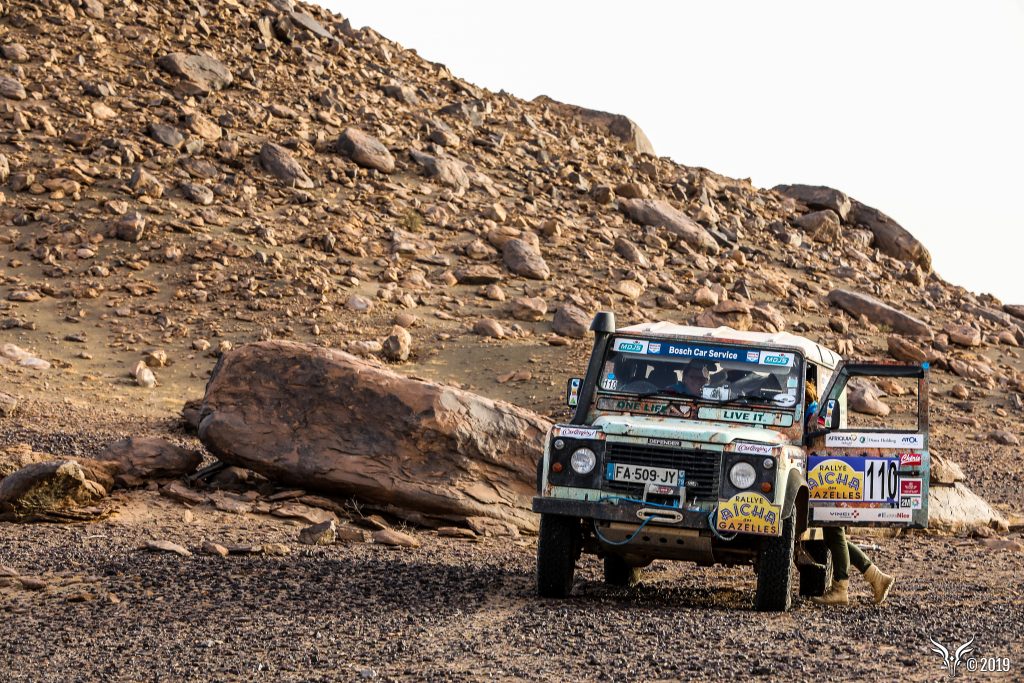 One of the photographers arrived as we were trying to sort out the maps for the next day. He asked if we had had a good day. I was a bit grumpy (understatement), so I gave him some sort of sharp answer. He said that he was going to take my picture anyway as by the time we saw the official pictures I would be able to look back on the moment and laugh. I think I responded with a derisive laugh and said something like “you must be f**king joking”. Of course he was right! 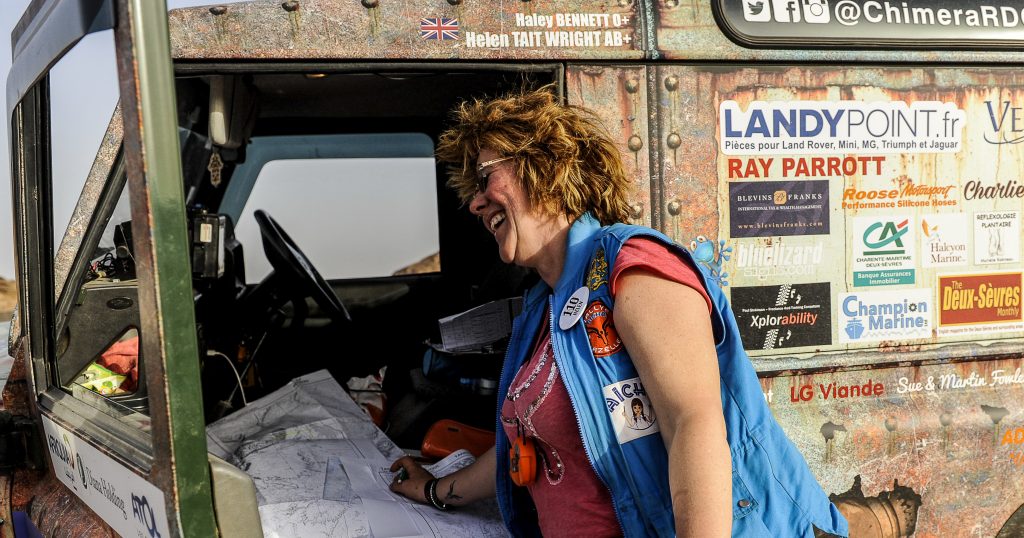 It’s a ghastly picture, but a great memory!

Under the rules, we could not validate the checkpoint until the next morning, and as it was a marathon stage, we would be camping out.

Eventually other Gazelles started to arrive to camp with us. We picked our spot and pulled the cars around to try and form a wind break as the wind had really got up. We tried to make a firepit with rocks, but there was just no way the fire would stay lit; the wind just blew it out, and there wasn’t a lot around to burn anyway. So, we ate cold food, drank some warming wine and gin, watched the scarab beetles burrowing into the sand and then retired to bed. 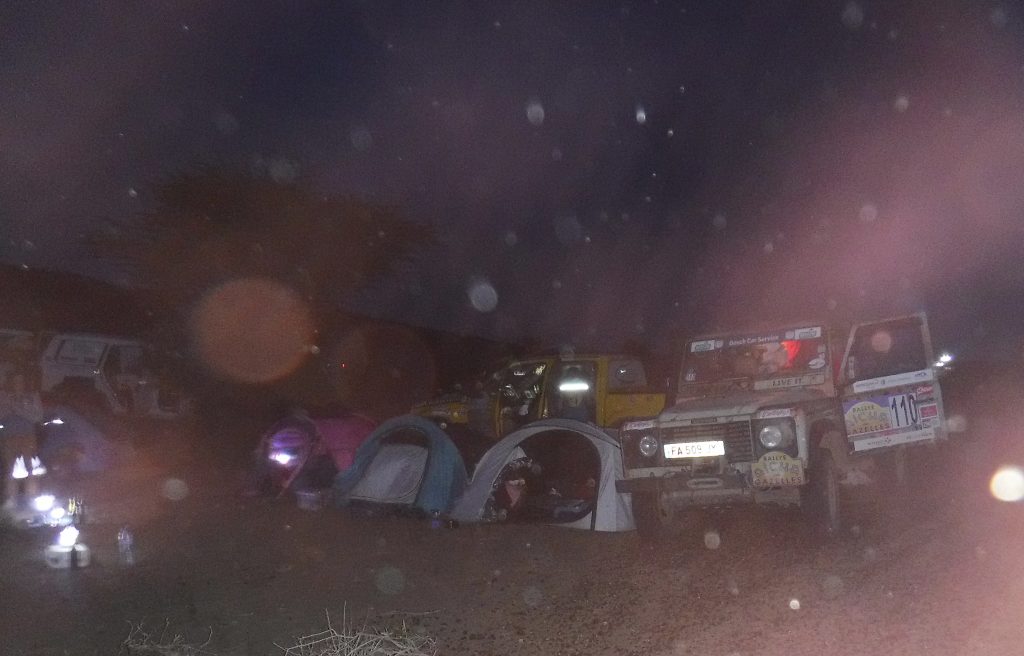 It’s never that easy to sleep when you can’t breathe properly, and with the howling wind added in, it was another night with no restful sleep.

One of our fellow Gazelles said “Even the misery is fun”. I think that day more than any other I was not feeling one ounce of fun!

But, Gazelles never give up, and tomorrow is another day, right?!