Well, the rain arrived in the night, and how! It was of monsoon proportions.

I think most of us were awake before the 5am wake up call, (if you had managed to sleep in the first place) and I had water ingress into the tent, which I couldn’t work out. Later I found out that the tiny fragments of stone in the sand that you cant avoid when you pitch the tent had made effectively pin holes in the groundsheet, not helpful when the tent park is a massive puddle, and I think the tent just wasn’t man enough generally for the amount of rain we had had.

Outside it was just a mud bath and the rain was still hammering down.

Palladium boots, perfect for desert wear, are not waterproof and on the walk to retrieve Priscilla I got totally soaked, everywhere! By this time our tents were completely covered in mud due to the folding up process and all our belongings were wet. 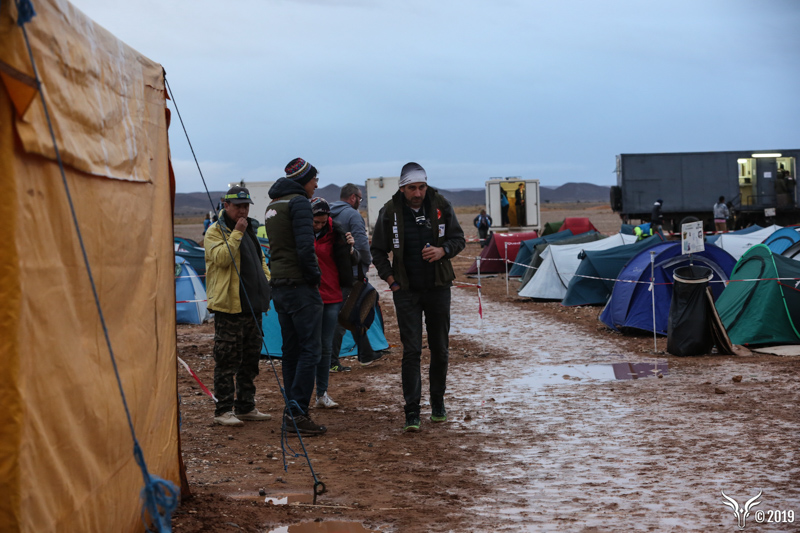 A very wet morning at the bivouac

The rain had even penetrated the restaurant tent so the floor was a mud bath too and every single chair was soaked as were the tables and table cloths. The morning atmosphere was not a happy one. We ate breakfast standing up. At the 6am briefing we were told that the staff were out assessing the situation and we were to wait until 8am for a further briefing to find out if the stage would run or not. We had no choice but to hang around, cold and wet, to see what happened.

Ivy, an American Gazelle who was having a tough rally with her French partner, had been joking each morning about how each day was a new circle of hell! Well, it certainly seemed that this one was turning out that way. We all secretly hoped that the day would be cancelled and we could all go off to town and get cleaned and warmed up in a nice hotel.

8am arrived and it seemed there was a god! the day was cancelled. The oueds were torrents of water and it was deemed too dangerous to send us out. It was the first time in the 29 year history of the rally that a stage had been cancelled – some might have mentioned that it was also the first time the rally had had an all English team !!! 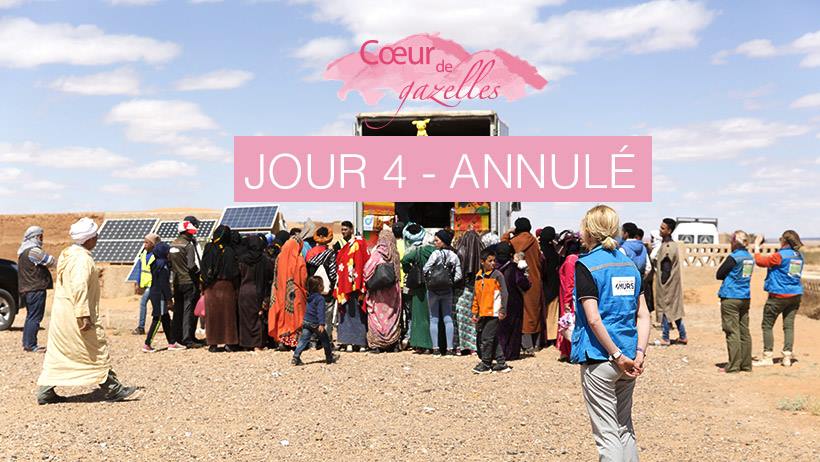 We were told to leave the bivouac for the day as the staff had a mammoth clearing up task to do.

Had the stage run, we would have relocated to a new bivouac that night, but as it was we were to return to the same one for an evening briefing. We decided to re pitch the tents in the hope that they would dry, as the sun was due to return later, and head off to Erfoud to a hotel. 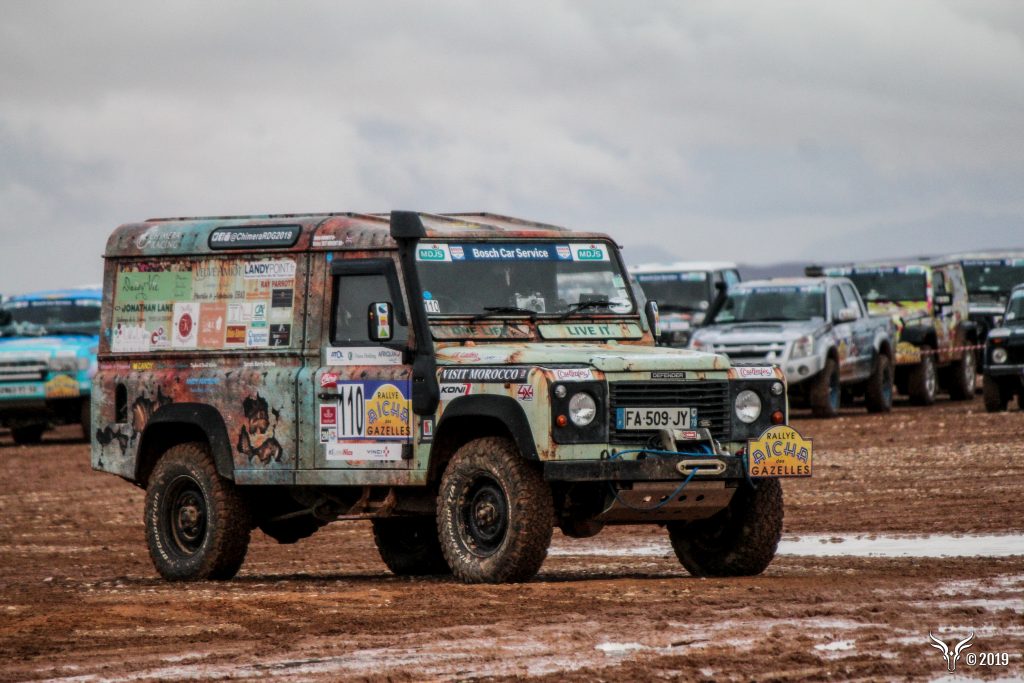 Heading off on a grey morning to find hotel comforts 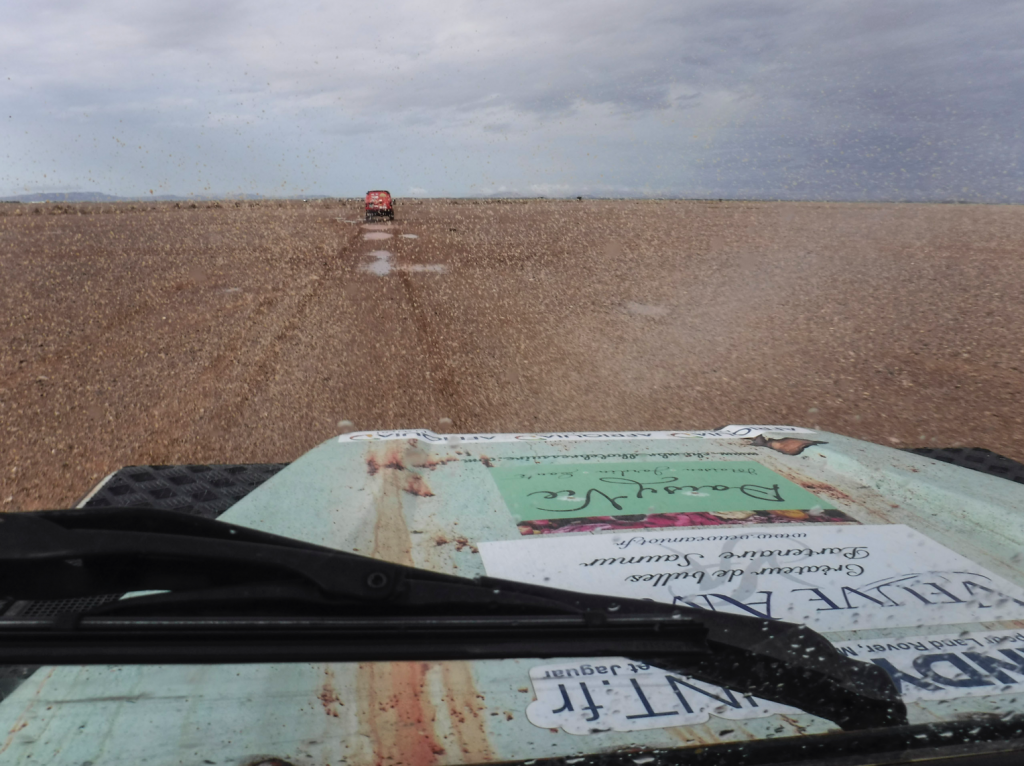 Lots of the other Gazelles had the same idea, and we had to go out the north side of Erfoud to find a hotel with space, but we ended up at the Chergui Kasbah hotel and booked in.

A bed! A hot shower that was more than 2 foot square! The luxury of a proper loo! Amazing how just a few days without the things we take for granted normally make you appreciate them all the more. Added to that, we had booked a massage and lunch, and, the hotel had a laundry service !!! The decadence!

Having sorted out a pile of muddy clothes and smalls to have washed, we had wonderful showers and a snooze before lunch.

Lunch was also wonderful and we took full advantage of the eat as much as you can from the buffet offer! 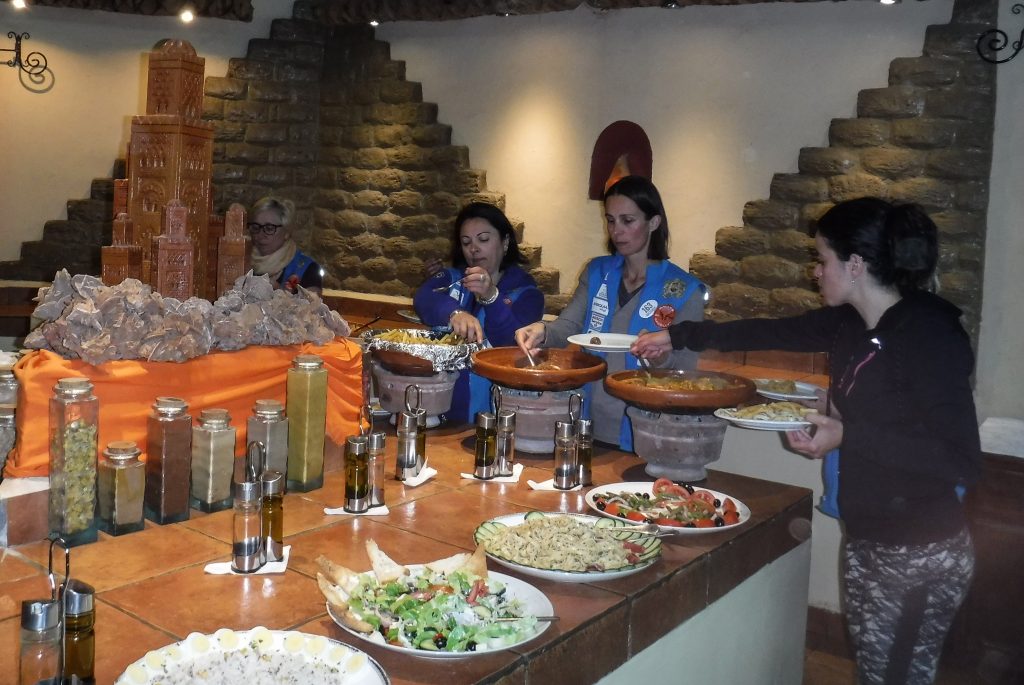 Then we had a little relax before heading off for our massages. That felt soooo good!

When we came out the sun had returned too and it was glorious. Gradually Gazelles emerged from their rooms and gathered by the pool to enjoy the sun. Muddy boots were set out on balconies to dry …. 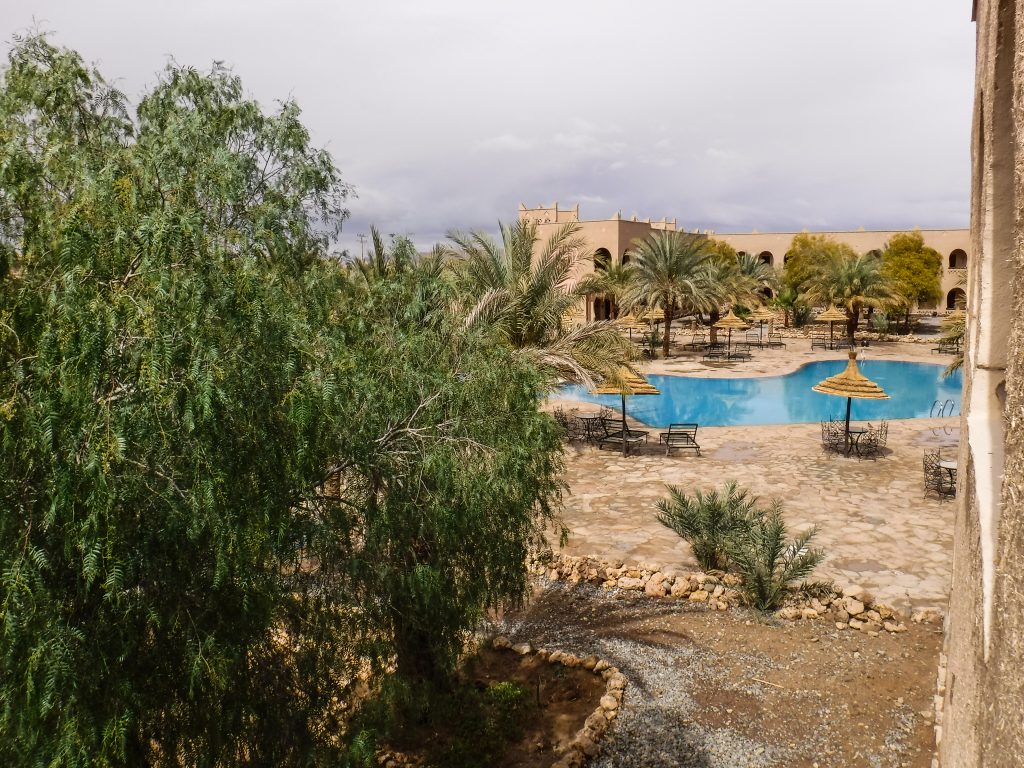 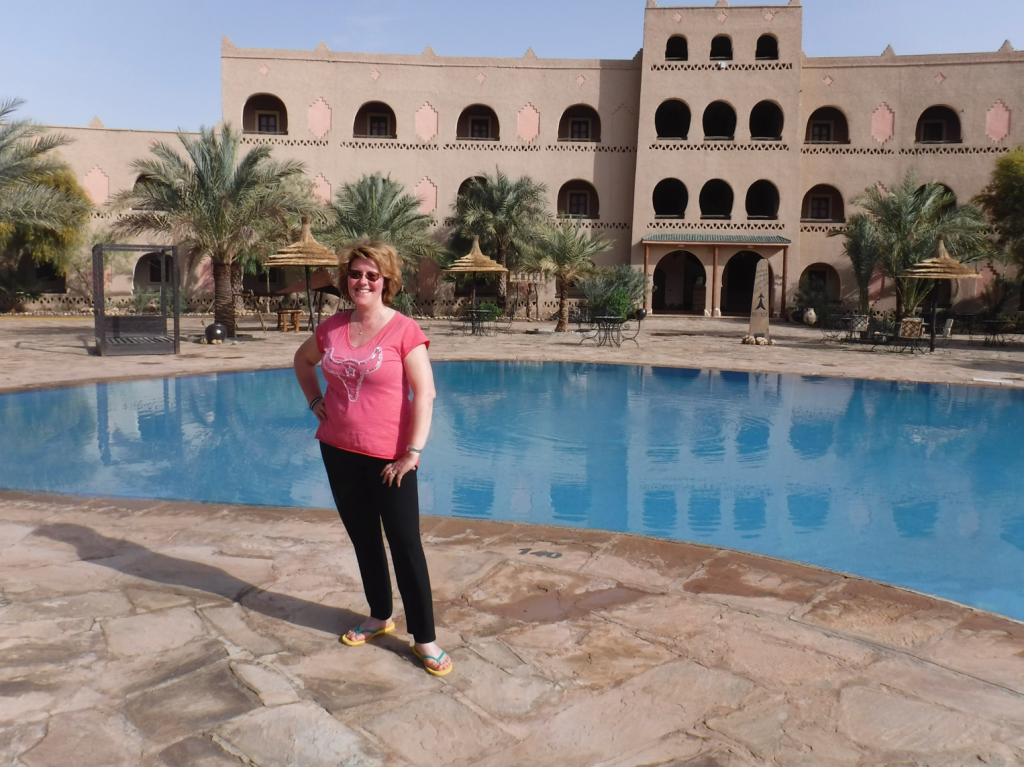 Enjoying the delights of the Chergui Kasbah hotel in Erfoud

Should anyone happen to be visiting Erfoud, I thoroughly recommend the Chergui Kasbah Hotel!

All too soon it was time to head back and we waved a reluctant goodbye to the hotel and set out for the bivouac once again. 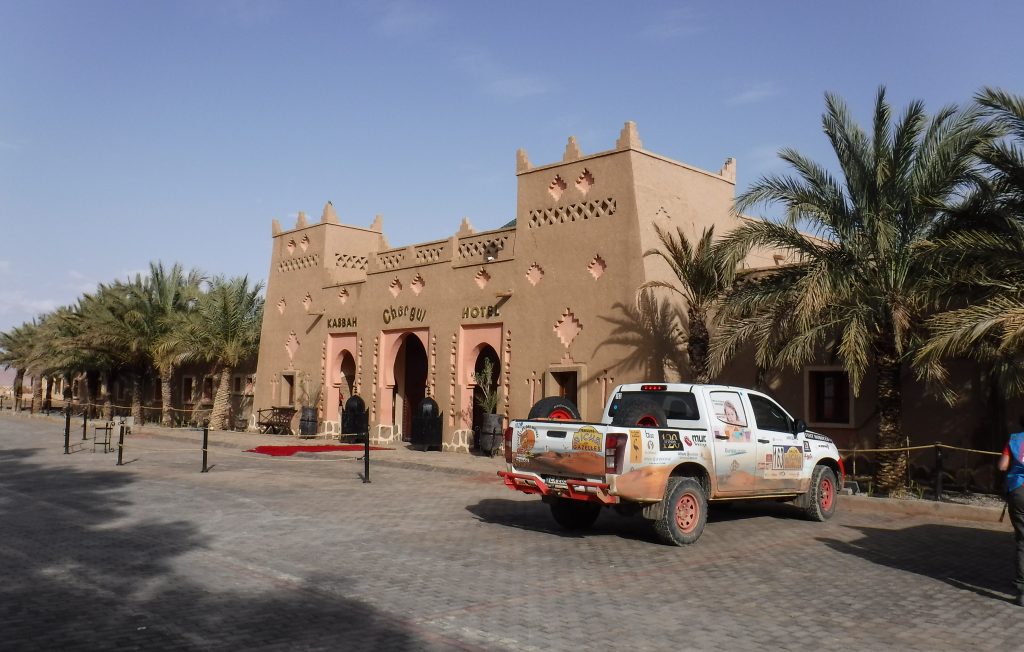 Goodbye and thanks for everything! 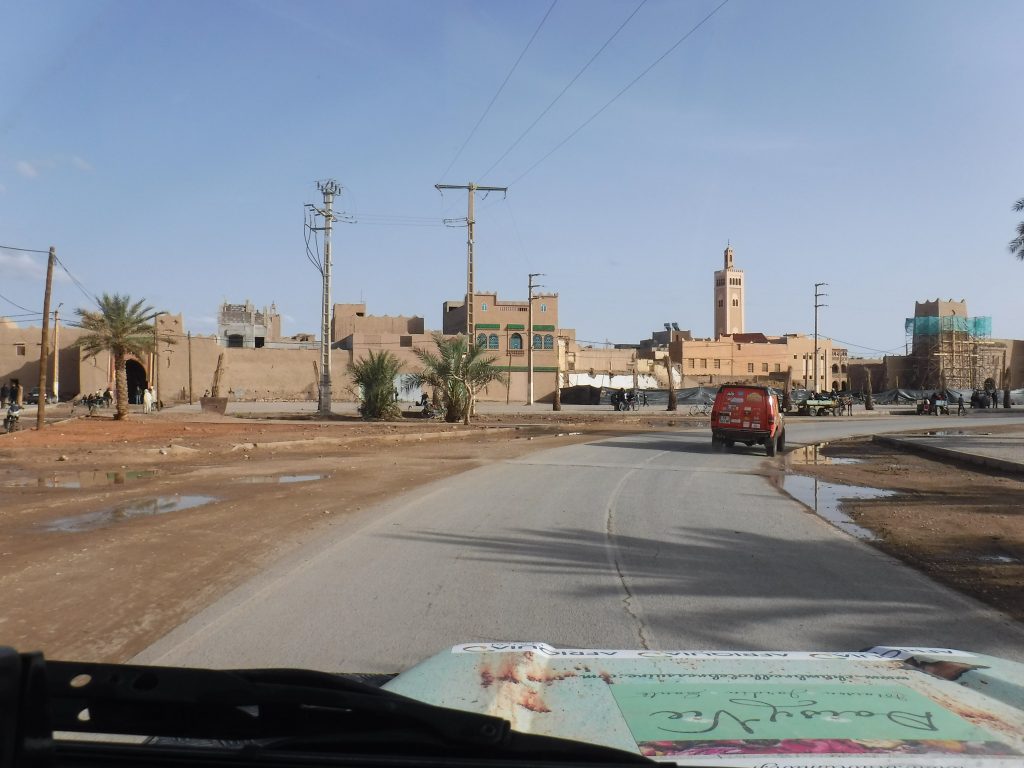 At the evening briefing we found out that as we hadn’t in fact moved bivouacs, we had to get up an hour earlier the next day to allow for the transfer to the start of the first marathon stage. 4am! Deep joy!

On the plus side the staff had done a truly miraculous job with drying out and cleaning all of the tents, tables, chairs and carpets etc and there was a bit of a party atmosphere during dinner that night. Our personal tents were dry too, so we retired for an early night.