Stage 3 was our first full day in the dunes of Erg Chebbi near Merzouga.

The night before we had received some important advice from JoHanna Hoehn and Susie Saxton, Americans who have competed in the Gazelles multiple times, which was to make Priscilla as light as possible. By this point in the rally we already knew we were carrying way too much weight, particularly in spares. Although the rally organisers had sent a list of spares to take with us, we had discovered that some of the other teams had way less than us, and in some cases next to nothing. Luckily Stage 3 started and finished at the same bivouac, so we elected to take all the spares out of the car and leave as much as possible behind in our tents.

There was an element of risk in this as if for any reason we didn’t make it out of the dunes, we had no camping gear with us, but we figured it was worth it, and Priscilla would provide us shelter if necessary.

On dune day, there were only 3 routes, basically easy, medium or hard, and it was up to each team to decide which they wanted to do. We went for the easiest route on the basis that I had never driven on fine Sahara sand dunes before, and in the 6am briefing we were told that the sand was particularly tricky that year. Best safe than sorry.

So, we headed south to the dunes, as prepared as we could be. 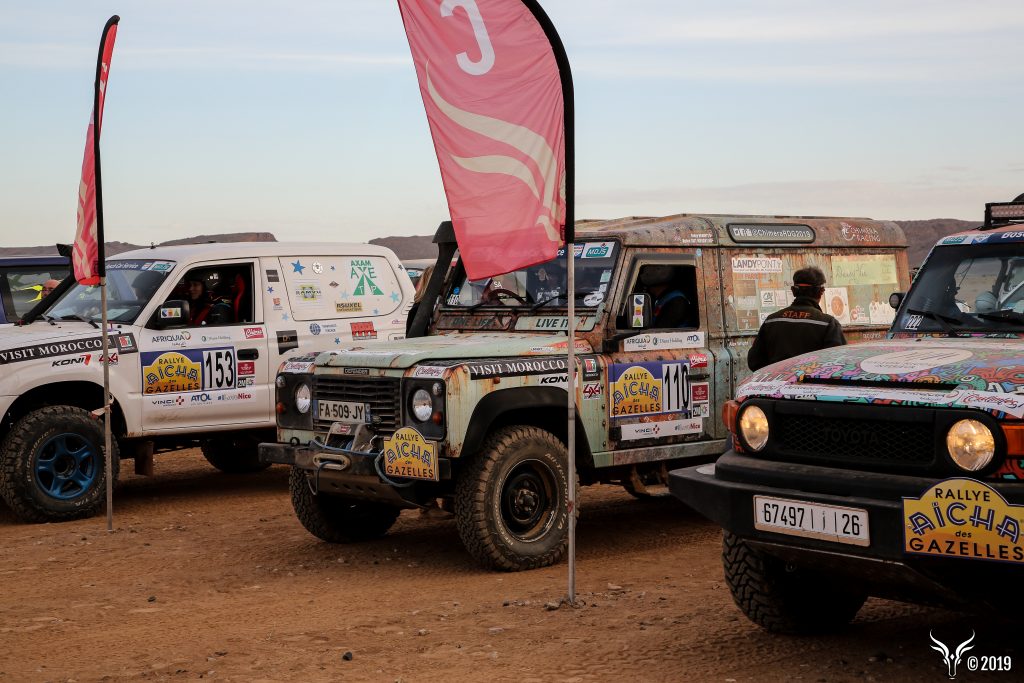 Waiting in the starting formation to head to the dunes

Although I still didn’t feel on top form, I knew that day would require total concentration and be a test of my driving skills, so the adrenalin was pumping!

As with the day before everyone was heading in more or less the same direction to get to the dune field, and sure enough, there was a bit of a traffic jam for the first checkpoint on the edge of the dunes. Added to that it is also the entry/exit point for pretty much all traffic heading to the dunes from the north so there were people returning on camels from a night camping under the stars and other groups heading out also.

After this check, the most important thing was to let the tyre pressures down. When driving in the sand you want as much contact with it as possible, and reducing the tyre pressure gives the tyre a bigger footprint. 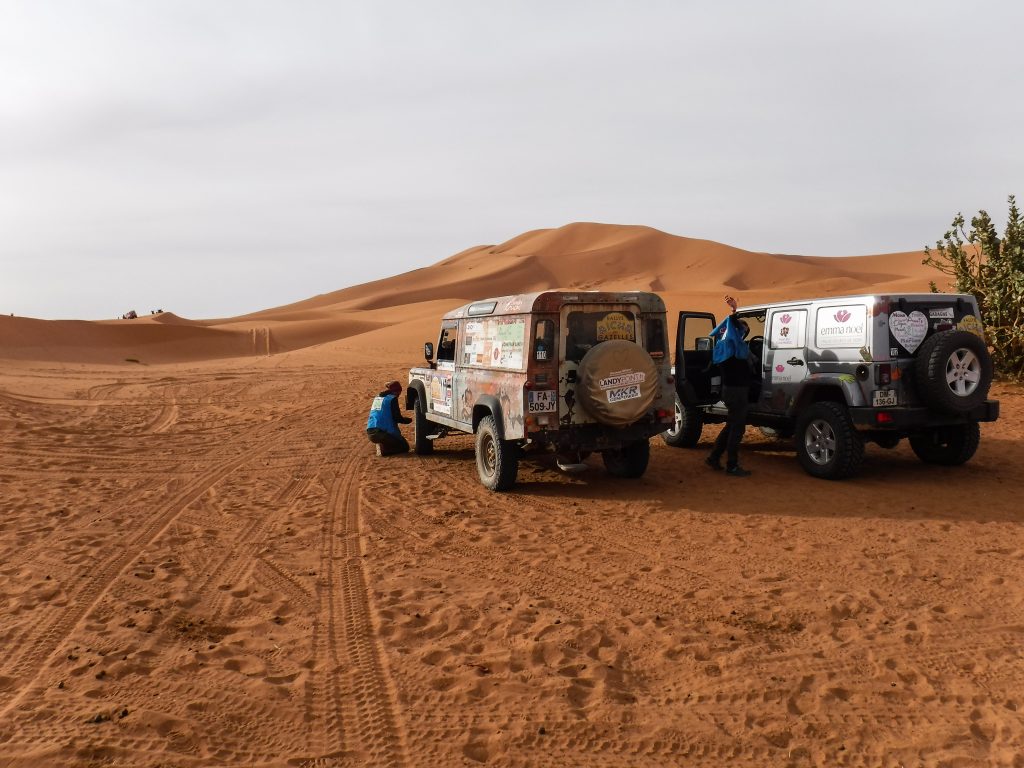 Reducing the tyre pressures before heading into the dunes proper

Then, no excuses for further delay, we were up the first dune! I think everyone stopped at the top to breathe a sigh of relief  ….. and get a heading. Security is all important in the dunes so your co driver must check that the descent is clear before you go up a dune, otherwise you run the risk of hitting another car that may be hidden from your sight. Therefore when there is a group like this it is important to wait your turn. 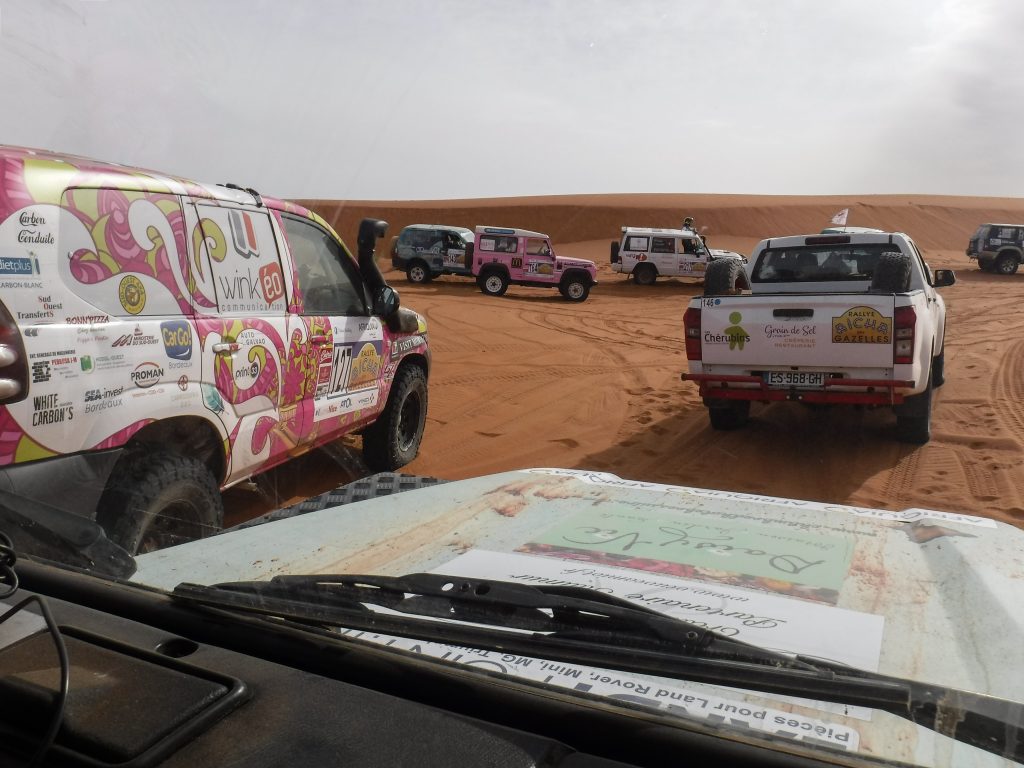 We were also told that for security reasons it was best to tackle the dunes in small groups so that there is always someone with you in case you need help. We teamed up with Betty and Catherine who we had encountered the day before, and their friends, Algerian girls, Lylia and Saliha. 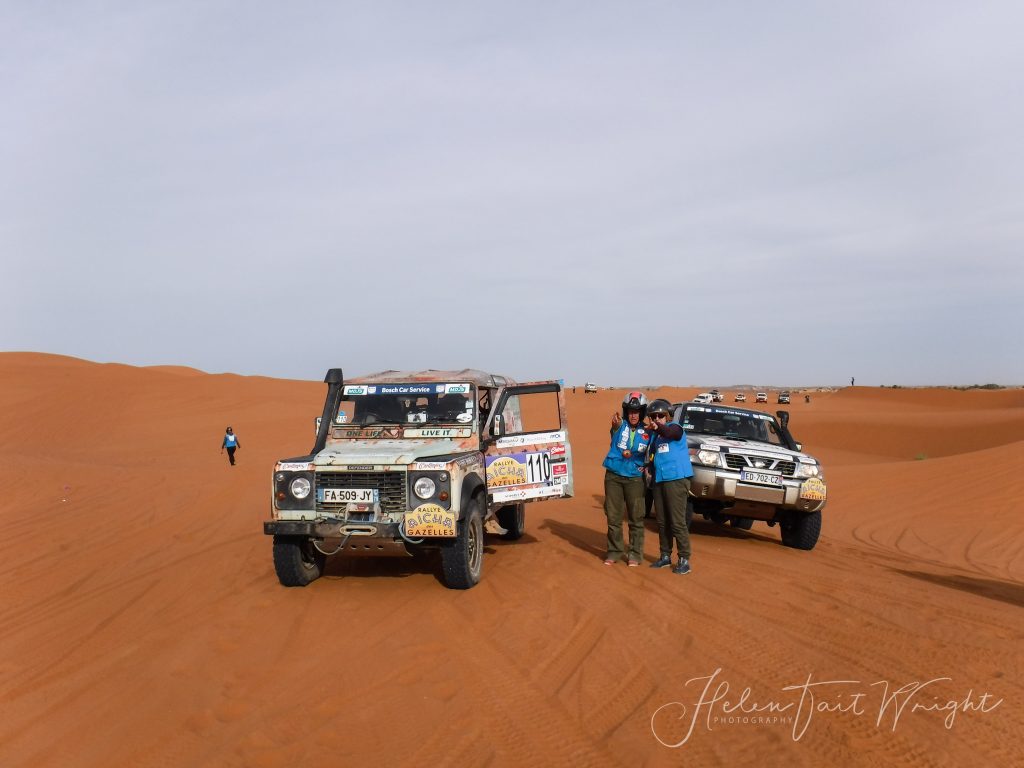 Getting a heading with our dune buddies

The dunes were incredible in all respects. It was a day with intense emotions, stunning scenery, terror and elation in equal measure.

They produced two of my favourite images of the rally and another very special human encounter. 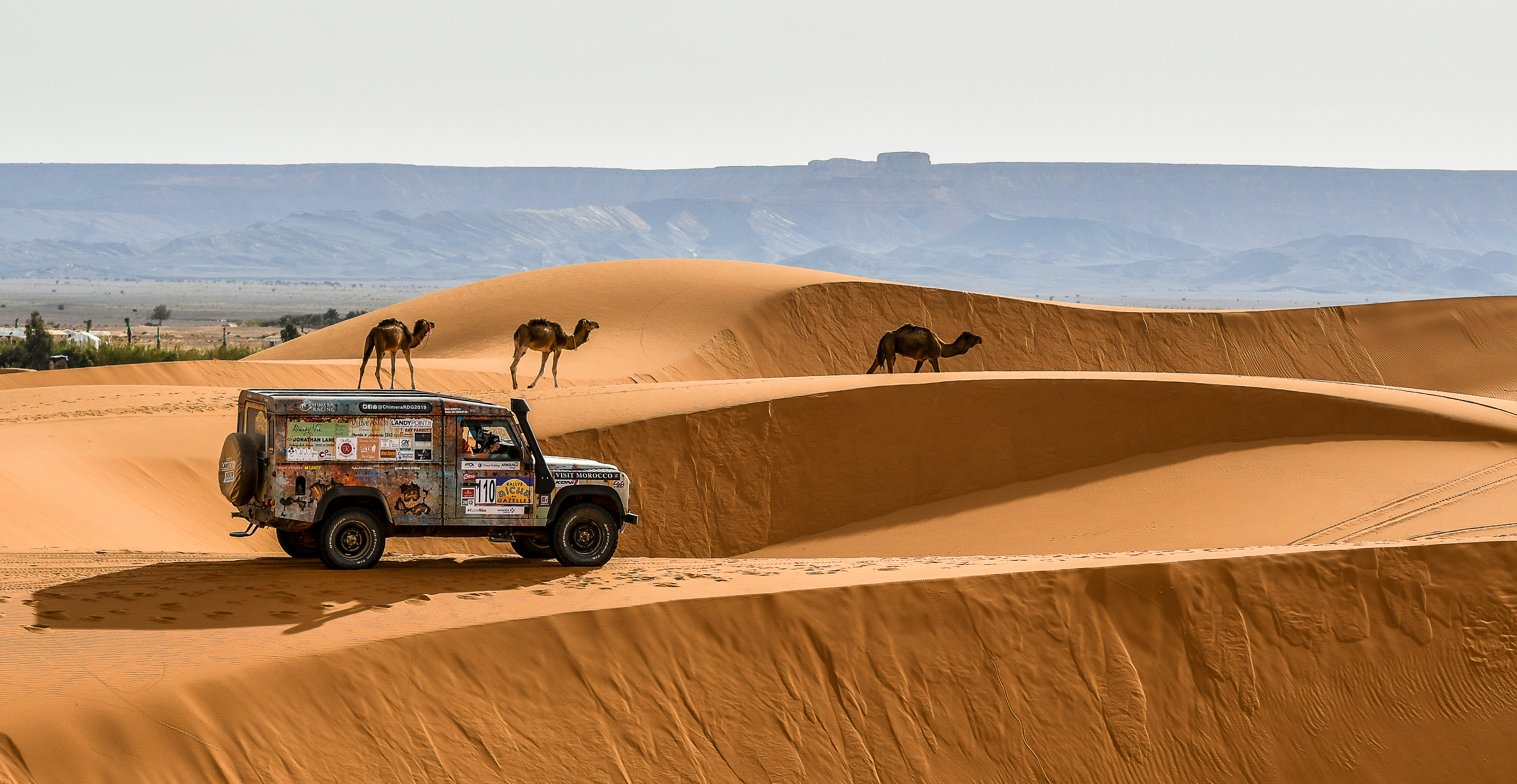 Probably one of the most loved and evocative pictures from the 2019 rally. 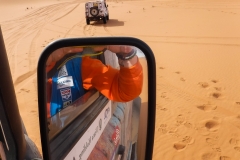 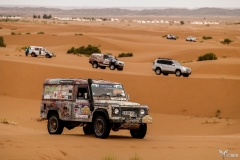 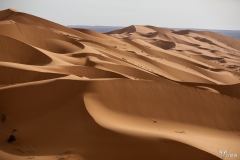 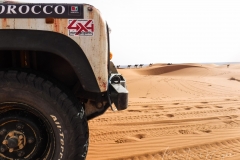 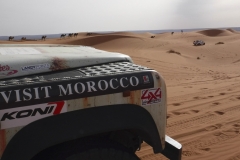 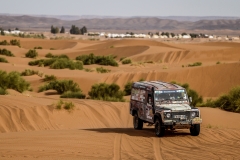 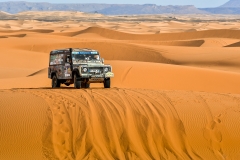 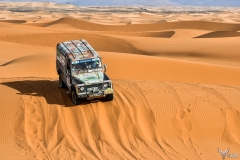 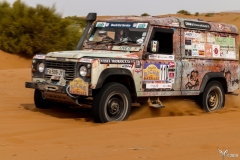 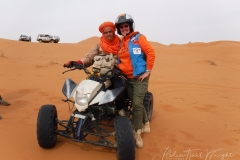 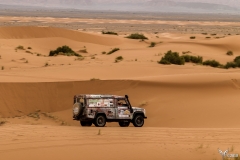 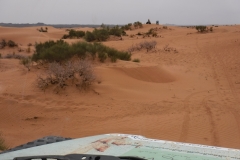 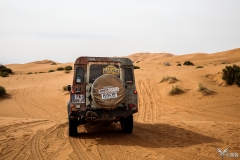 To drive over a dune, you should approach at 90 degrees to the crest, power up it and lift off the power just as you get to the top, before changing to a low gear to descend. If you dont make the climb, you slam the car straight into reverse and go back down in your tracks, and try again!

Prior to leaving for the rally I had watched a most excellent video on YouTube of an American girl, Emmy, on the Rallye des Gazelles, in a Defender, and she had had a little issue where before cresting the dune her car had slewed sideways. This is a dangerous situation as there is potential for the car to roll. I had talked to Paul our off road driving trainer about this and how that really scared me.

I expect you can guess what I am going to tell you next. Yep, it happened to me!

I felt the car slew and my butt definitely clenched. Driving on a side slope is one of situations I really dislike anyway, and here I am on the side of a dune, thinking, oh my god, I don’t know what to do. The drivers side was the lower side of the car, same side as the fuel tank, so a reasonable amount of weight waiting to tip me over. My brain froze. I got out of the car and must have looked like a rabbit in the headlights. The Algerian girls and Haley arrived and we tried to figure out what to do. Then a guy in an orange turban arrived on his quad. He said something along the lines of “Don’t worry lady, I live here I can tell you what to do”, but in French, and then started to get everyone organised with digging. Basically, I was to go on hard right lock and they were going to dig channels for me to reverse into until the wheels were straight, then it was the reverse back down routine. It felt so wrong, but it worked! 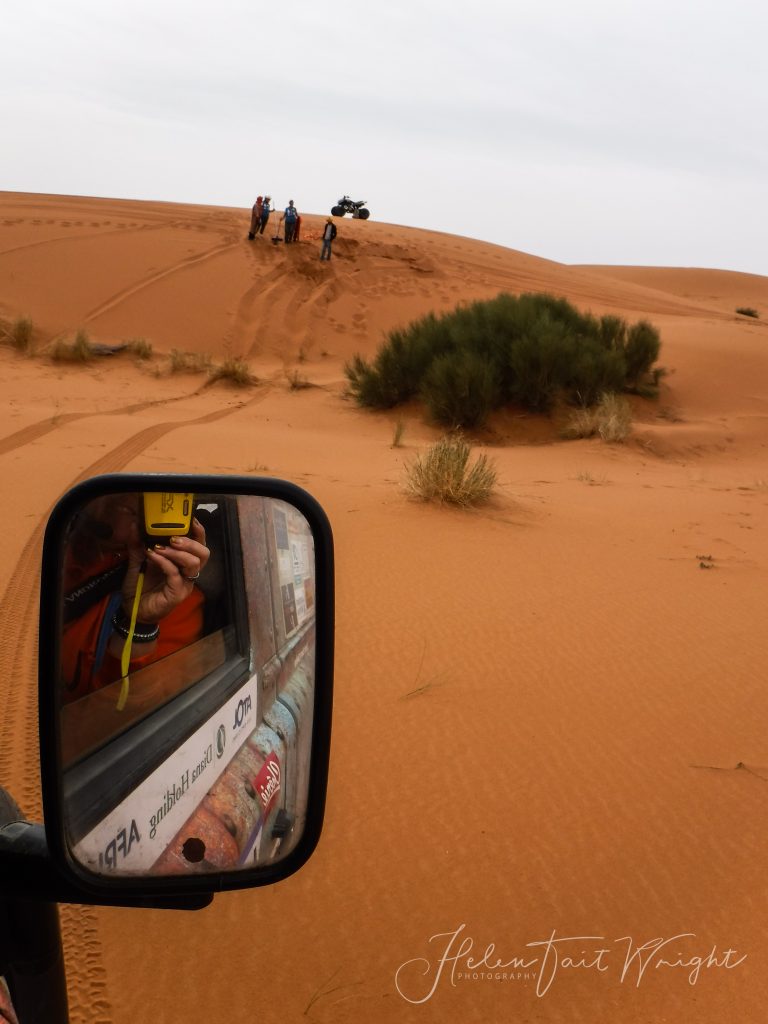 After a slightly tense moment !!

This picture of me with the man in the orange turban is definitely one of my favourite of the rally. (Look how amazing his eyelashes are …) 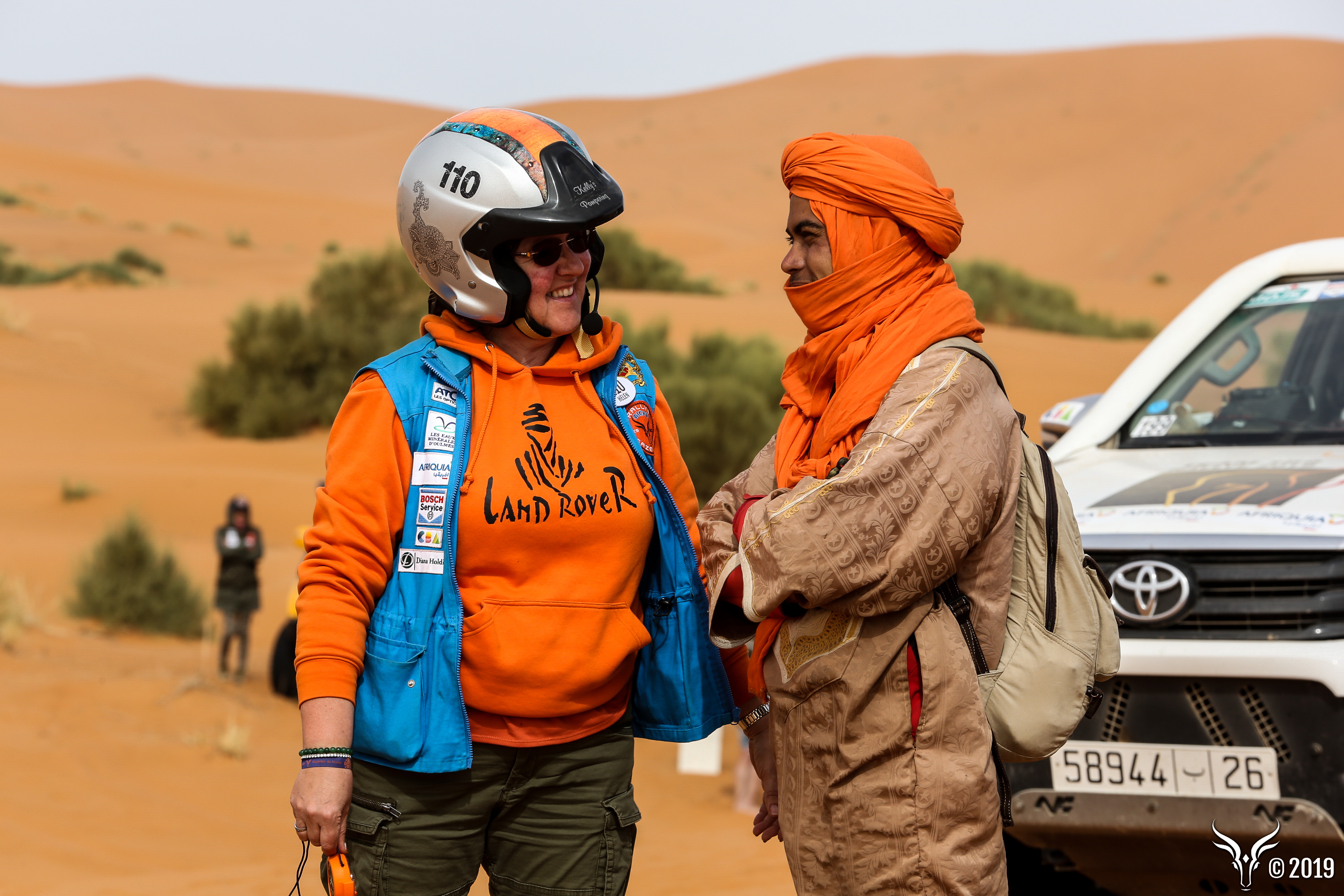 Then I had to get right back in the car and drive right back up the dune!

We helped several other teams who were stuck in the dunes in the course of the day, but were actually pleasantly surprised by how easily we got through in general. The advice to lose the weight certainly helped.

Navigation was in a sense easier in the dunes as there were actually points you could identify to navigate towards, even though you were twisting and turning. Some of the checkpoint guardians had set up a little oasis around their point with an inflatable palm tree which was amusing! We saw someone camping in the dunes in a Defender off to our right at one point …. not part of the rally. After one checkpoint we stopped for a wild wee and a bite to eat, and our dune buddies decided to carry on. But new dune buddies weren’t far away and we continued with Sofia and Francoise, Team Franco Sueduoise, and the Discovery girls Isabelle and Adriane. 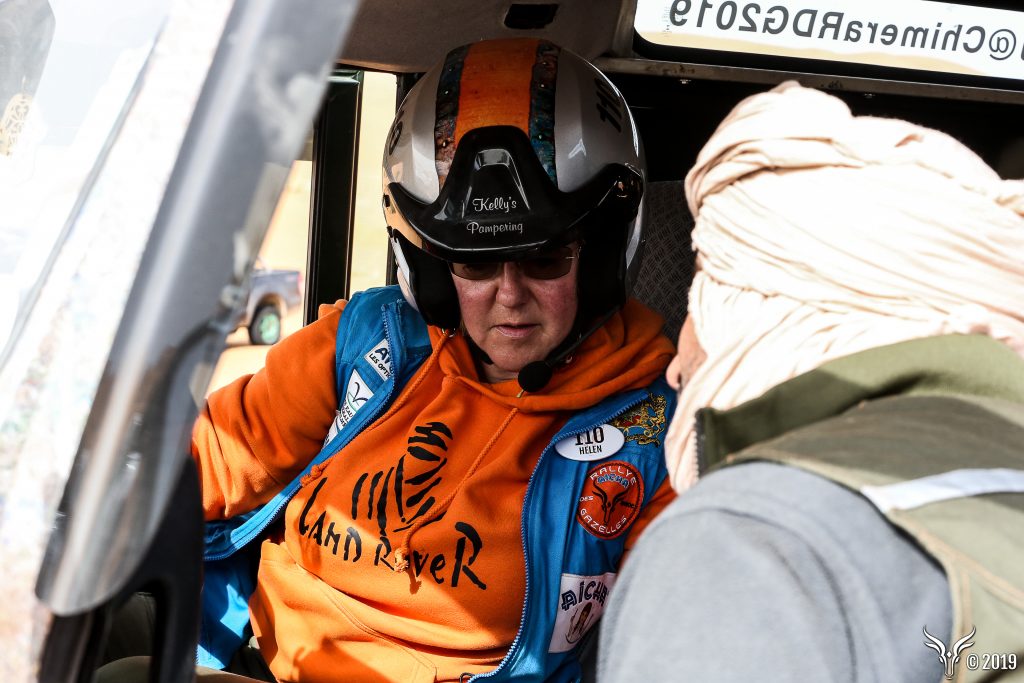 Verifying a checkpoint – we confused all the organisers being right hand drive!

As we arrived at Checkpoint 5, it was late afternoon, and given that we had no camping gear with us and we were all anxious to get back to camp before dark, our trio made the decision not to go for checkpoint 6 and to follow the oued we were alongside and head for “home”. 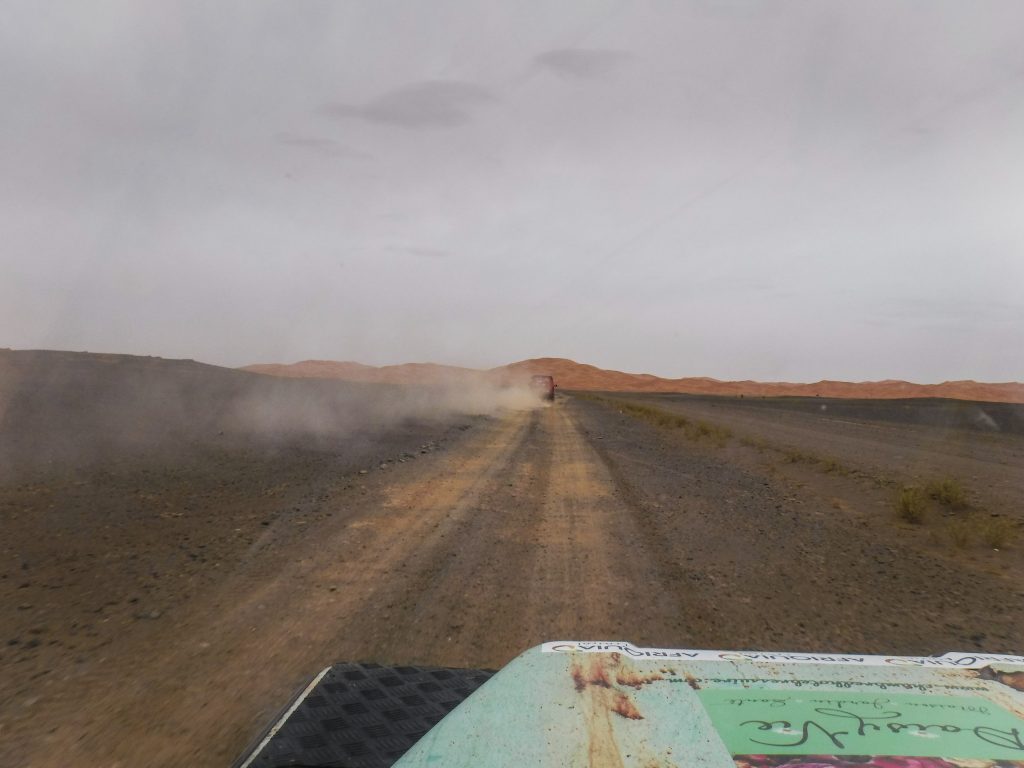 Following the Disco girls back towards the bivouac. Landy ladies together!

We all rolled in together, at the end of a pretty awesome day! 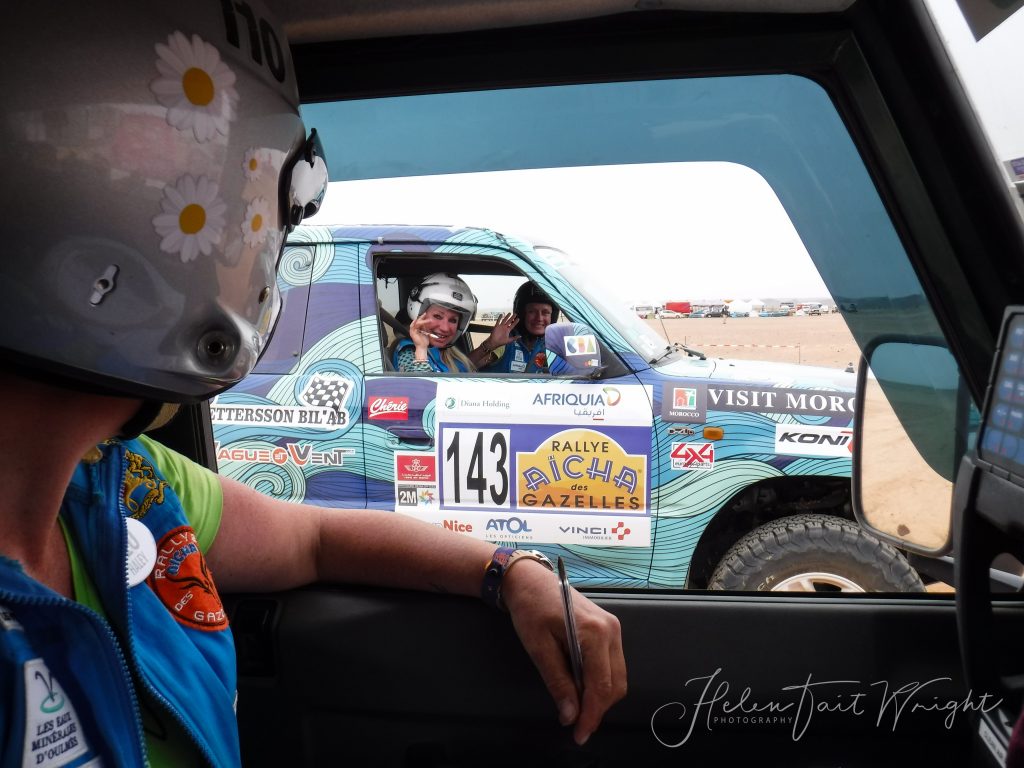 Back at base with Sofia and Francoise

After completing the usual nightly routine, we headed for the restaurant tent and all the talk was about an accident in the dunes. Sisters Marie-Helene and Valeria had had a nasty experience with their car rolling. They had crested a dune too fast and the nose of the car pitched in and rolled them down the dune. They were unhurt, but their rally was over, the car a write off. This was a harsh wake up call for me certainly, and I had to call Chris that night to tell him we were OK.

At the bivouac there is a mail tent and messages sent through the website are printed off and placed in your team cubby hole each night. There are also 3 phones which you can pay to use to call home, but as I’m sure you can imagine, with over 300 Gazelles wanting to speak to someone, you have to be patient, and time in contact with the outside world is limited! 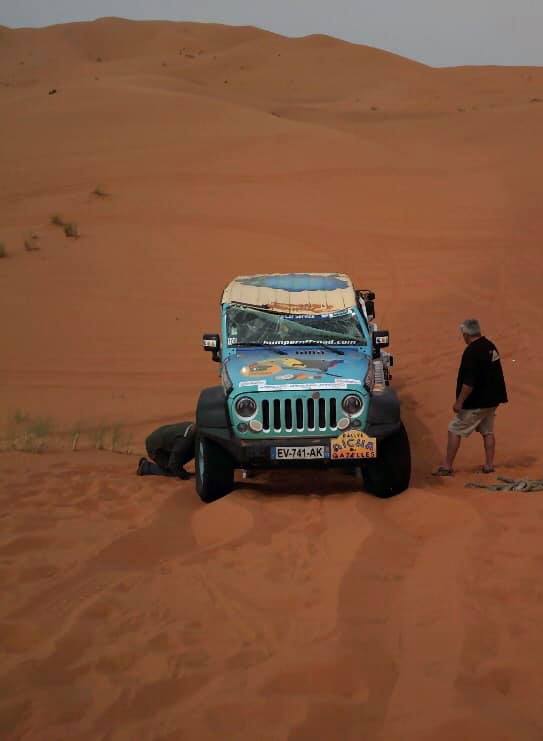 The rally is over for these Gazelles

So, another day over, and one which would turn out to be my favourite of the rally, not that I knew that then.

We retired that evening knowing that rather unexpectedly, rain was forecast overnight ……