After a great nights sleep – no, I’m joking, although it was marginally better than the first night – we arose once again at 5am to start Day 2. At least now we knew the morning routine, it was slightly easier to get ourselves organised and into the restaurant tent for the briefing at 6am.

The organisers provide a great array of food in the bivouac, but I’m not that interested in eating loads at that time of the morning, and I was starting to suspect that I was coming down with something. The throat tickle I had had since leaving the boat was becoming more persistent. Still, no time to be ill, we had a rally to do!

Stage 2 was going to take us north of Erfoud to the infamous cauliflower fields. Not actually cauliflowers of course, but little low lying bushes that get choked with sand and become rock hard. They resemble cauliflowers, but you have to regard them as rocks as they can do the same amount of damage if you are not careful. As it happened we didn’t see too many, and I didn’t even take a picture of them, but believe me they exist.

As I said in the last post, all the cars shared the first three checkpoints on this stage, and it must have been quite a sight for the residents of Erfoud to see all the cars go through the town early in the morning as we headed north. 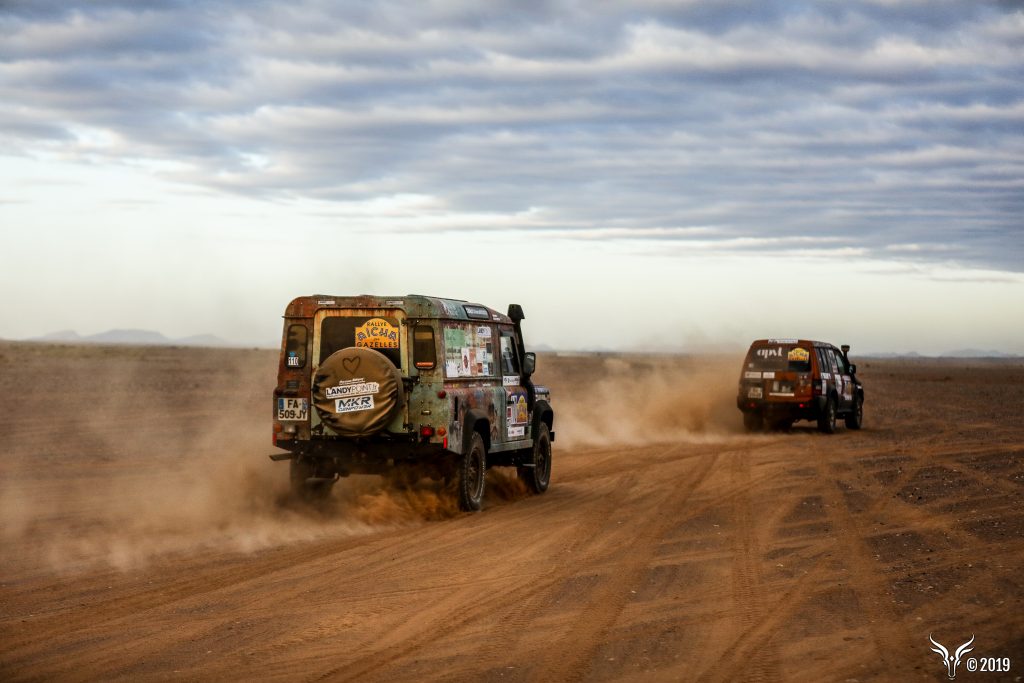 As we got out of the town and headed for checkpoint 3 we went through some amazing rock formations. You can see a car in front of us for scale ….. truly stunning scenery. 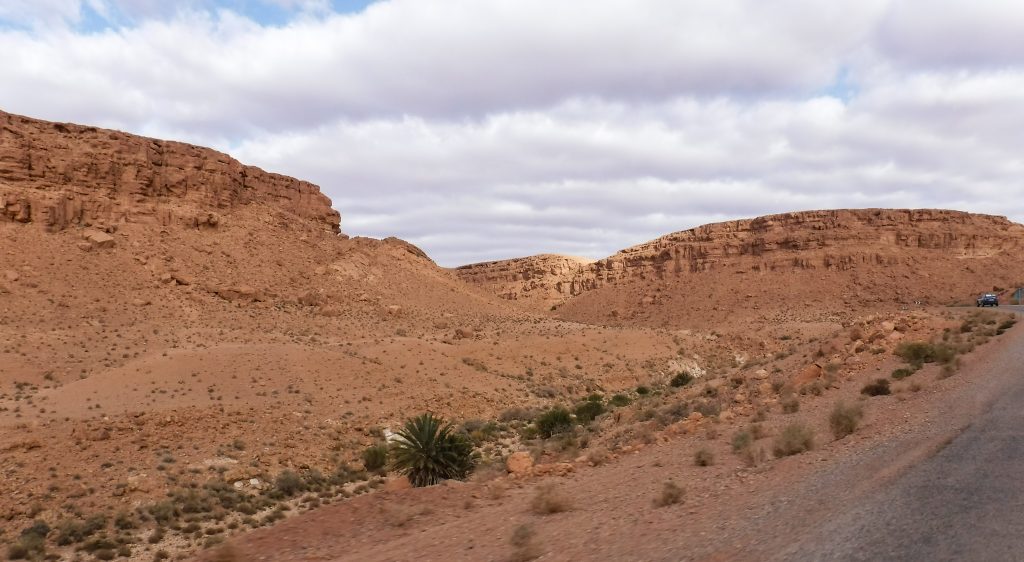 Of course the disadvantage of sharing checkpoints is that everyone arrived at once and there was quite a queue to pass through checkpoint 3. While we were waiting we were interviewed by Cherie FM for their daily rally update slot. We also discovered that our tracking system hadn’t been working, so a confusing morning for the guys watching our progress back home as our route to that checkpoint from the first one showed as a dead straight line! 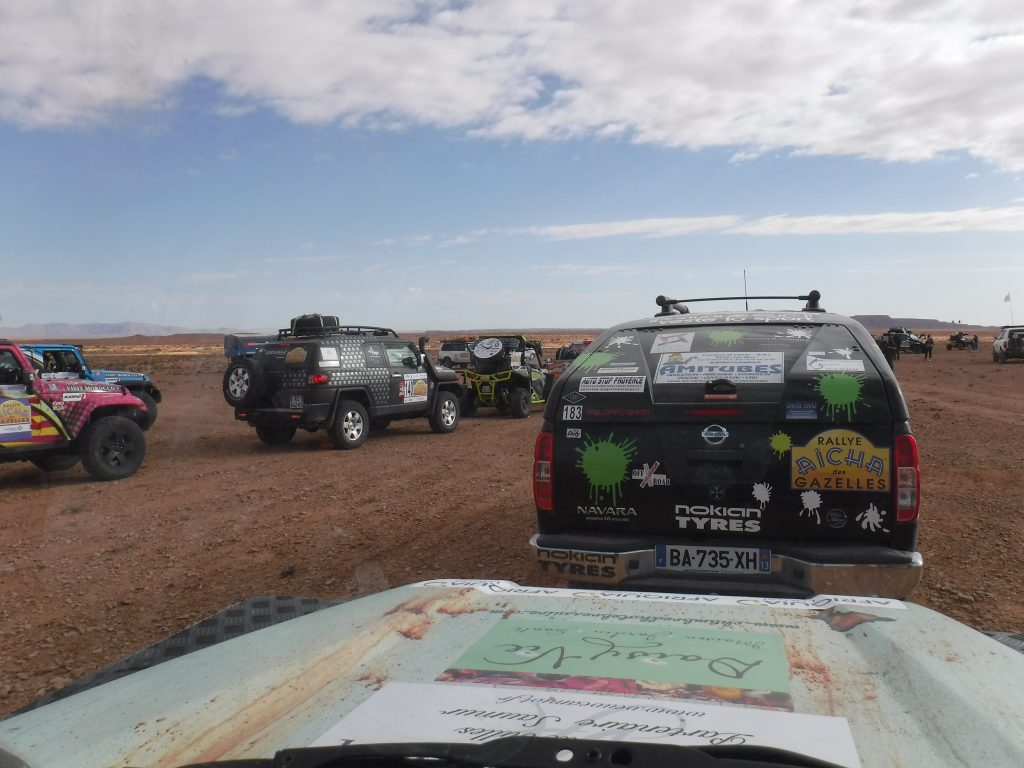 The queue of cars for Checkpoint 3

With the tracker fixed and the checkpoint validated, we paused to get our heading, alongside some of our fellow Landy ladies! 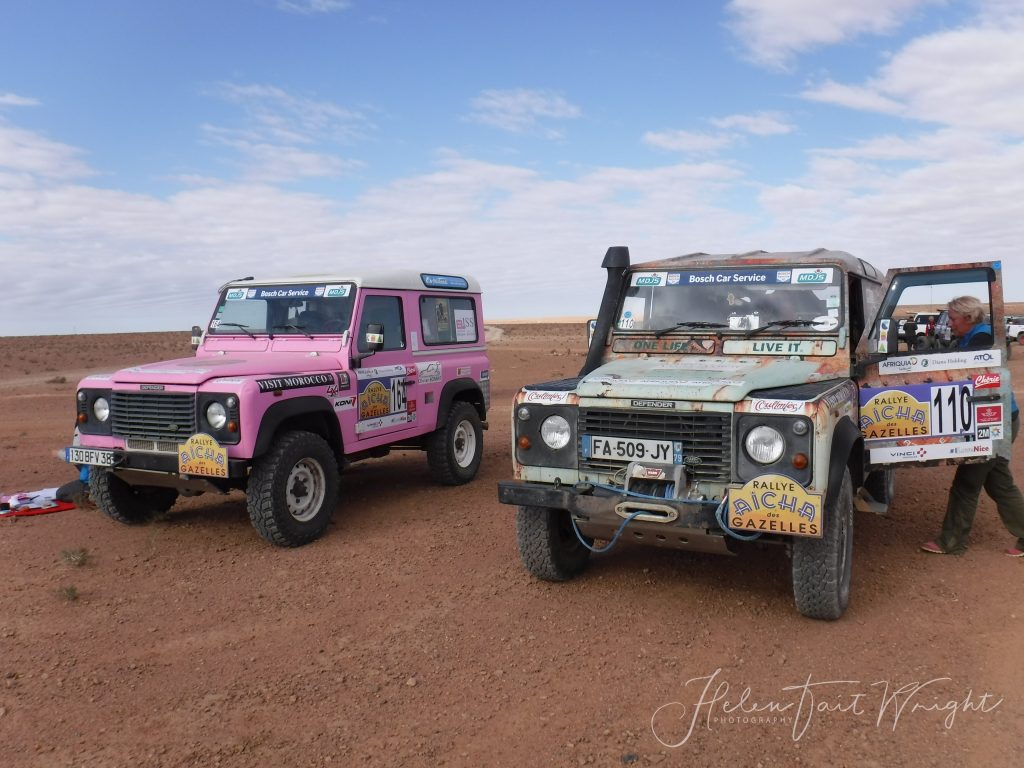 Then we set off. It’s quite strange that a large group of cars can disperse so quickly, and all too soon you are alone in the desert, searching for one of those little red flags! 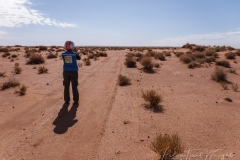 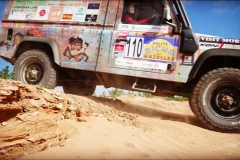 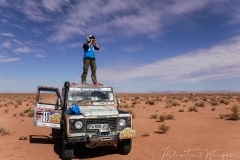 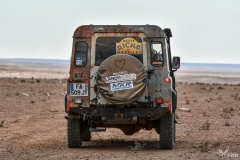 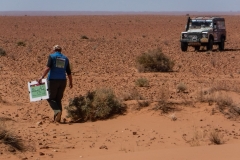 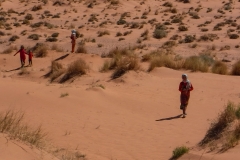 Eventually we came across quite a sizeable oued, and suddenly we discovered we weren’t as alone as we thought we were! As we stood on the dunes at the edge of the oued deciding the best way to cross, a group of children appeared. One minute we were alone, the next there were children approaching. I honestly haven’t the faintest idea where they came from as there was nothing to see in any direction. Quite a magical moment! We gave them some sweets, and I persuaded Haley, a reluctant photographer, to take a picture. I’m really glad she did as otherwise I might not have believed they were real. They disappeared as quickly as they came, seemingly melting into the sand.

For me it was one of the most memorable moments of the rally, the unexpected contact with the human element of the desert. 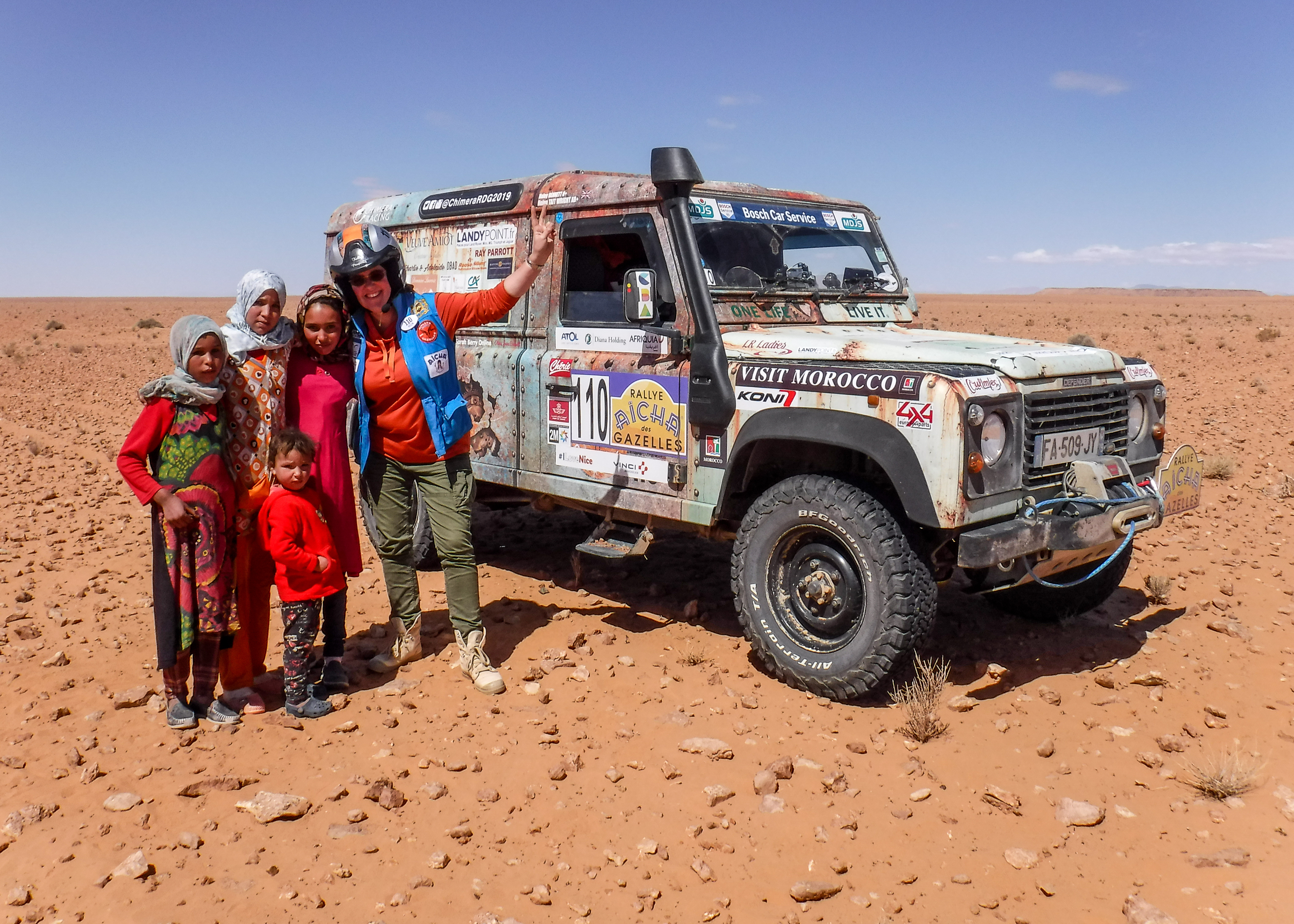 A magical encounter with the desert children

We crossed the oued and pressed on. Checkpoint 4 was proving quite elusive!

Further on we passed a tower structure where we saw a couple of guards. A building that wasn’t marked on the map I hasten to add – typical, you find a feature and it doesn’t correspond to the map! I suppose that’s what comes of using maps from the 1950’s! We passed our checkpoint 6, and eventually after we had probably circled it several times, we saw the flash of the red flag at checkpoint 4, and we made it before it closed. Yay! And, we weren’t the last car in, which was quite a miracle. We arrived at the same time as Catherine and Betty, Team 146, who we would encounter again later in the rally.

Time was getting short for Checkpoint 5 but we decided we might just have time to make it, so we set off again. It was a shorter distance away and looked like an easy route. But when we arrived at where we thought it was there was nothing to be seen. When we looked at the trace sometime later, we were really not far away but too far west. Sooooo frustrating. As we still had a little amount of time we , started to circle, but the time ran out. So, now we could not go back to Checkpoint 6 even though we knew where that was so we decided to head “home”. We had passed a well used track not far away, so we decided to take it as it appeared to be heading back towards checkpoint 3, and from there we could find our way…..

As we drove along, we suddenly noticed that the in car compass, on which we had been relying was jumping about all over the place. And this track was pretty straight. Hmmm, that could have been a major issue! By this time we had done the right number of kilometers to be back near CP3, but in reality we were on the wrong heading, way too far north. The light was starting to fade, so we decided to stay on the track on the basis it must go somewhere, and work it out from there. 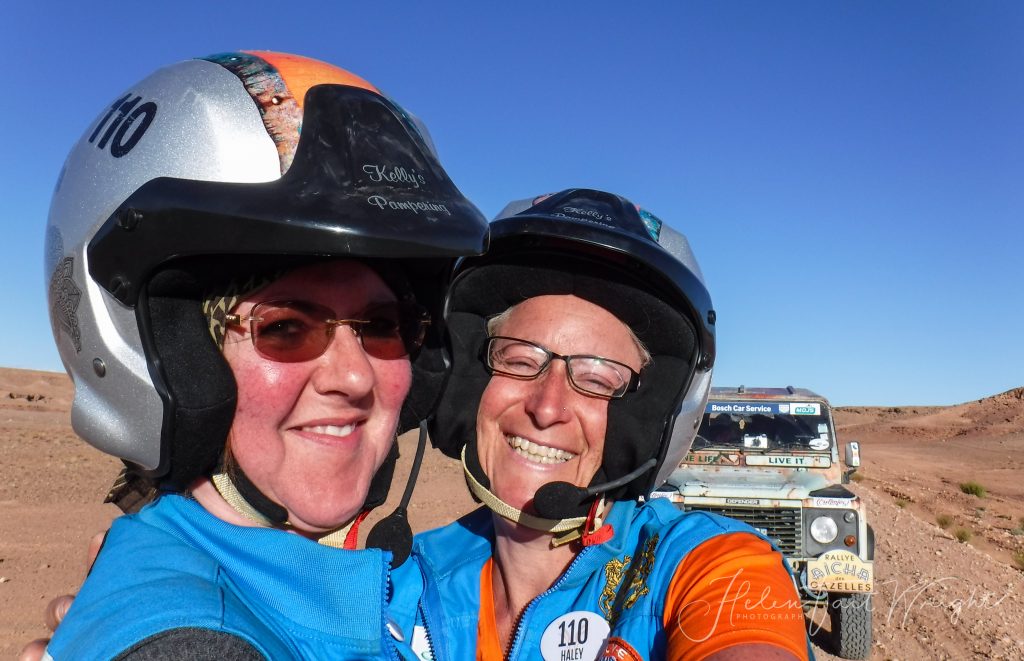 We call this our lost in the desert selfie, lol

It did go somewhere!

We came to a section with white marker stones either side of the track and a wind sock, and realised we were driving on a runway! Off to our right were a load of military type buildings with a barbed wire fence around them. We were now slightly worried we might get shot at or something! But there was no sign of life. At the end of the runway we could go left or right. As we knew we ultimately need to go south, and we were heading west ish, we went left. And came to more military buildings. With a guard. We pulled up to talk to him. He was quite chatty but I’ve no idea what he was saying; bit of a language barrier! 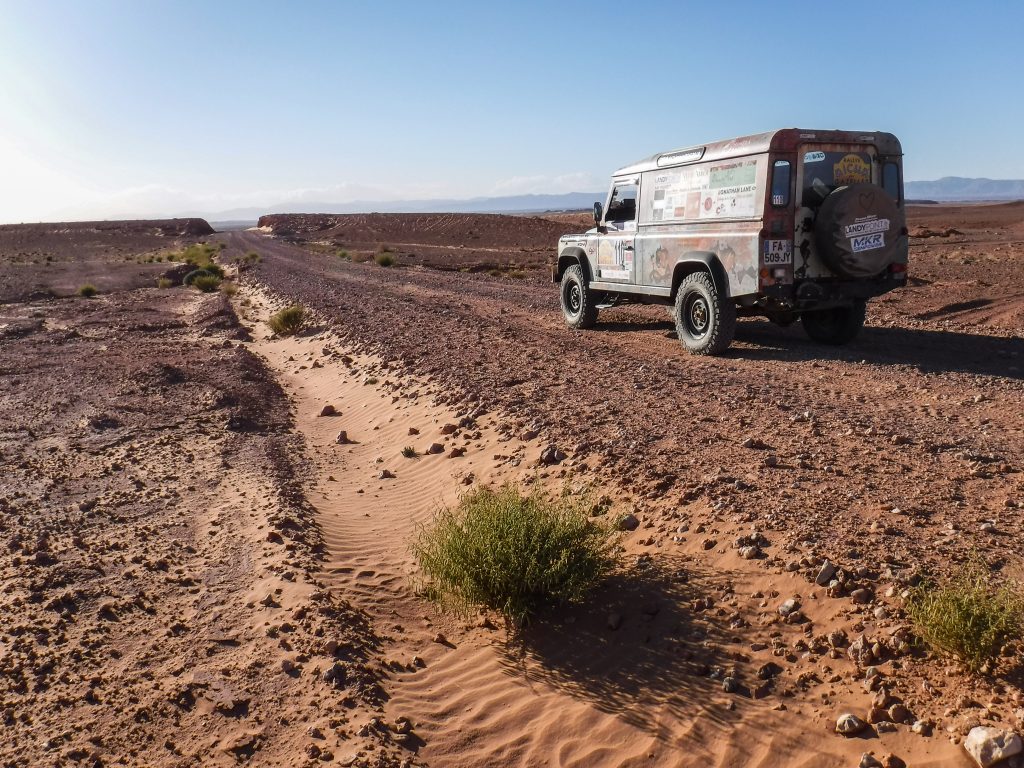 So we turned round and went the other way, and in the fullness of time came to a road. We stopped to air up our tyres and headed for the bivouac as the night fell. It was quite a detour as it turned out but we got back under our own steam, which we later found out was more than others did, who had to be rescued.

Quite a day, and an important lesson learnt regarding the compass. We hoped for a better nights sleep as Stage 3 and the first real dunes beckoned!