The first day of the competition started as all the others would, with a wake up call from Dominique, the rally founder, at 5am. It’s still dark at that hour and the wind was still blowing. The first thing I need to do when I get up is pee, but after tugging my boots on, and putting on more layers of clothing as it’s still really cold until the sun gets up, you have to queue for the loo! Not ideal!

In the morning, as at night, you are under time pressure ……. within one hour of waking, as well as peeing and anything else you need to do, you must pack your camping gear up, go and find the car in the Parc Ferme, find out which route you are taking and which start line you need to get into, get the car loaded, get the car in line, and get into the restaurant tent with your breakfast, ready for the briefing. 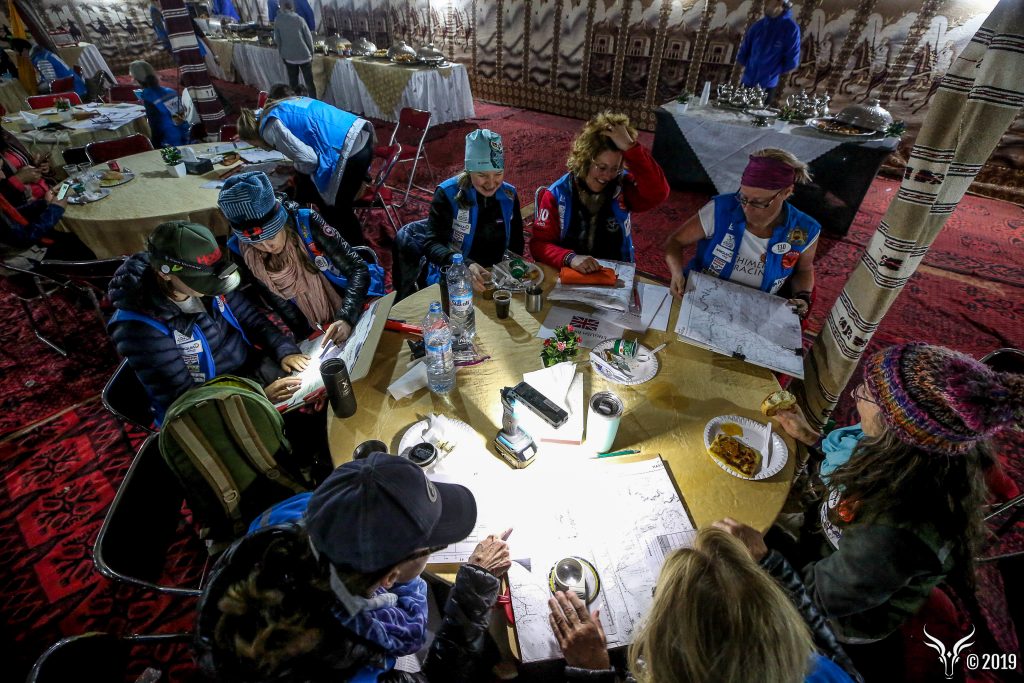 6am in the restaurant tent working on the maps

Finding the car is a challenge in itself! Parc Ferme and the mechanics area is set well away from the main bivouac so that the mechanics can work on the cars at night, and when they are done, they take the vehicle to Parc Ferme. So, you trot off across the desert in the dark with your torch, to the general location, and arrive at the parking area. As it was my first time, it wasn’t immediately clear that you have to recuperate the keys first, but I quickly worked that out, and once you get the keys from the guardian he has a plan which roughly shows where your car is. I discovered on this first morning that I should have got a number tag the night before to put on the keys, but I hadn’t, so got told off about that!

Then you head back to the tent park and try and find a parking spot relatively close to where your gear is, so that you can load the car. Haley in the meantime had been to find out what route we were on and which line of the start grid we should be in, which is posted on a notice board outside the classification trailer. With the car loaded you can put her in your grid line and head to the restaurant tent.

The catering on the rally is pretty good so you are able to get a decent breakfast. The organisers thoughtfully provide a translator, the lovely Heather, for the briefings, as although I do speak French, at 6am my head is not wired into listening to a briefing in French! We had a lovely little English group in the mornings, resulting in some great friendships which have endured after the rally ended.

With the briefing done, and map points checked, it’s off to the car to check her fluids and clean out the air filter, as these jobs are not done by the mechanics. All part of the morning routine. This also includes going to the water trailer to get your ration of bottled water for the day.

(A tip for anyone reading this who is thinking of doing the rally is to keep your toothbrush in the car and do your teeth while you are waiting to leave, with bottled water, instead of queuing for the sinks.)

Then as the sun rises, the cars start to leave. There are 6 different routes each day, and one car on each route leaves every few minutes. 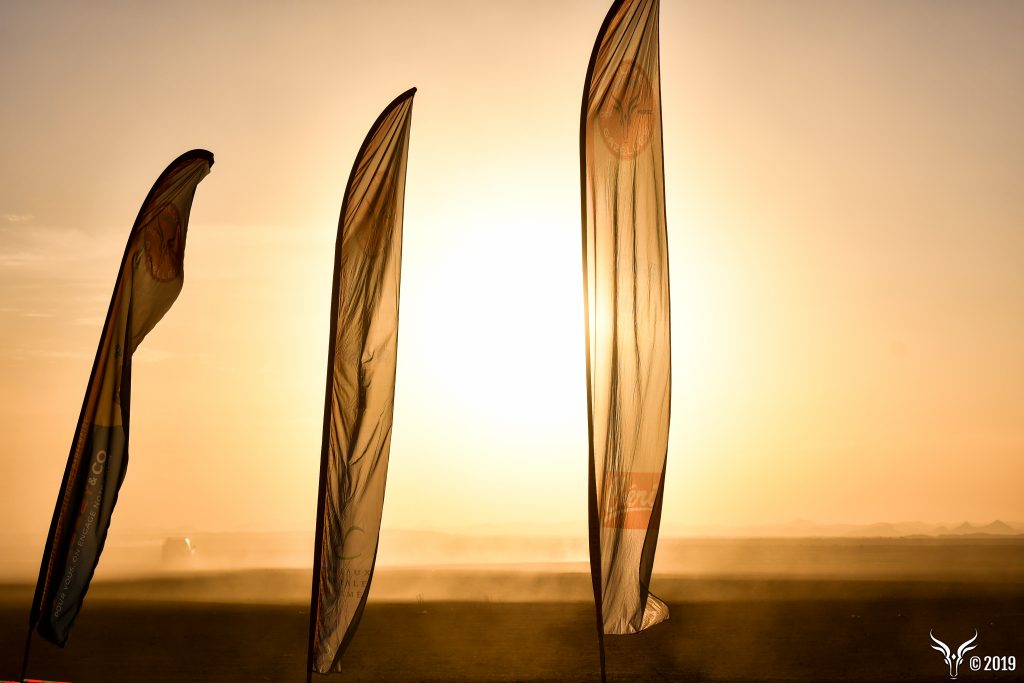 Sunrise on the start line

Once you get to the start line the control man (or woman) checks your odometer readings with you and you sign those off, then you are ready to go!

We were feeling confident as we headed off into the desert, after having had a good prologue. Before we got to our first checkpoint, we encountered a team buried up to the axles in the sand, so we stopped to help. They had been digging but weren’t getting anywhere – Sahara sand is so fine, it runs back into any hole you make like water. After more digging, and two more pairs of hands coming to help it became apparent that more direct intervention was needed, so I brought Priscilla round to attempt to winch them out. We still couldn’t move the car, so giving it a Priscilla sized tug was the only option! At this point we were horrified the learn that the girls had no recovery gear with them, but luckily we had enough straps and shackles to safely connect the two cars together, and then Priscilla hauled them to safety.

That elation was short lived as the checkpoint wasn’t ours.

Somewhere around about this time we consulted another team and this picture was taken, although I have absolutely no recollection of the encounter! 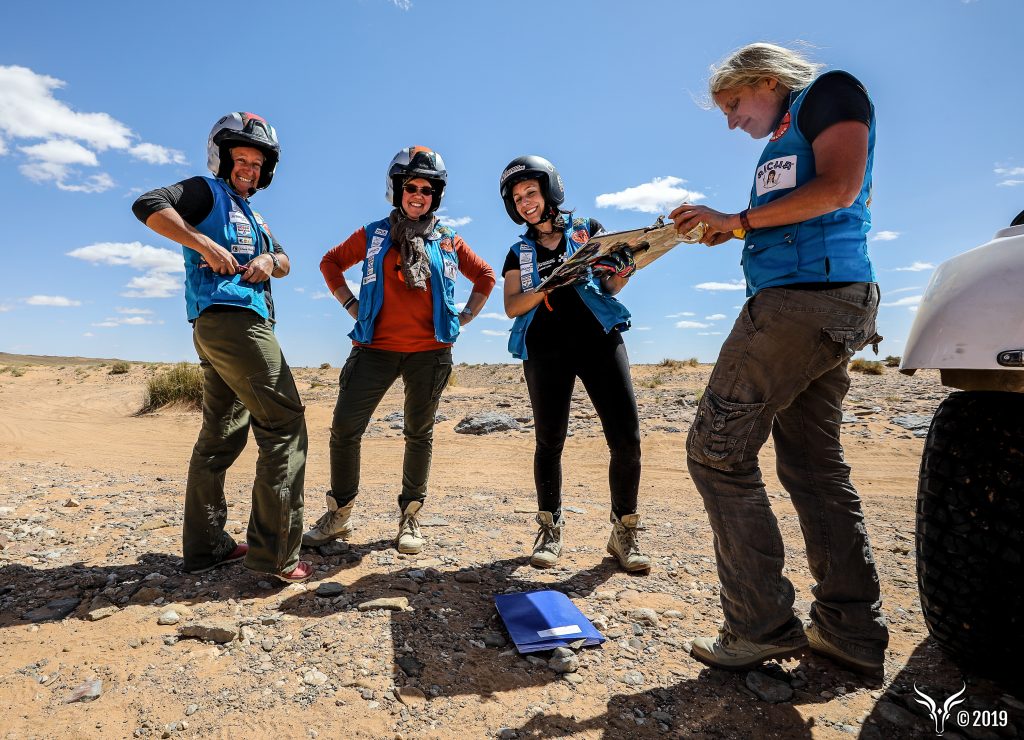 Having established where we were, we realised that for whatever reason we had been heading to the wrong place and in actual fact we had passed the checkpoint location before we stopped to help the other team. But, there is no time for recrimination, we had to go back to validate the checkpoint.

So, back into the oued. An oued is tricky to drive – the sand in the river bed has a hard crust, but the tyres break this up and it is easy to get bogged down if you don’t keep the momentum up. You quickly learn to keep an eye out for more stony areas where it is safer to stop if necessary and there is more traction. 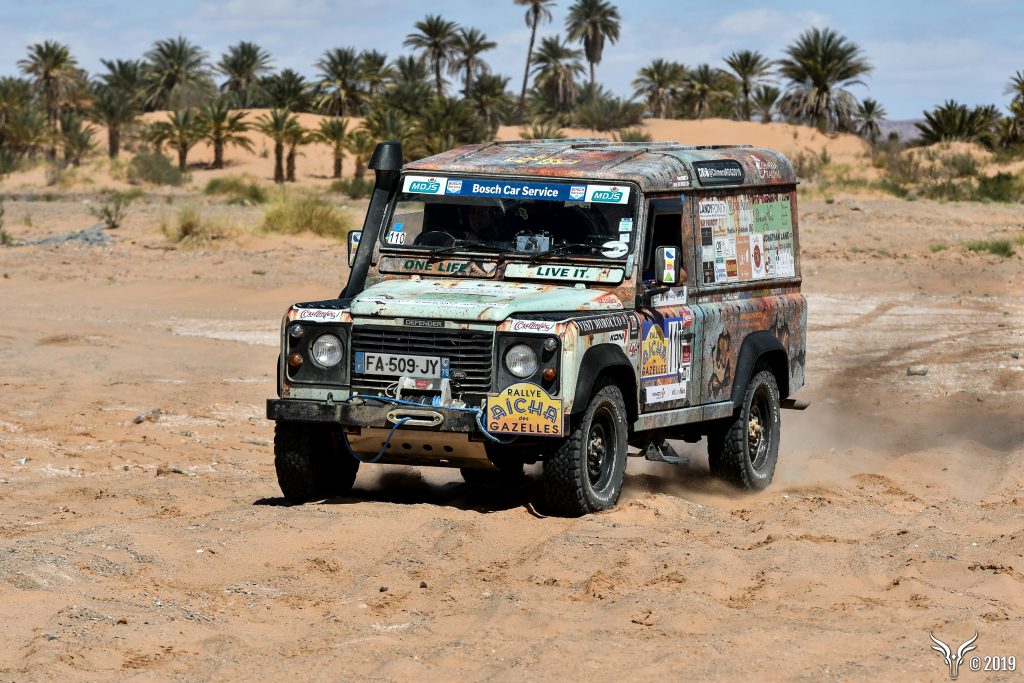 Eventually we made our way back to our checkpoint, and having had a little laugh with the checkpoint man about whether we were the last car to arrive (we weren’t) we got our next co-ordinates and set off again. You only get the co-ordinates for the rest of the stage on arrival at the first checkpoint.

Our onward journey took us back into the oued, again! Another thing we learned on that first day was that checkpoints close, so if you don’t manage to find your points, you have to head back to the bivouac. Anyway, we carried on down the oued, and eventually we saw a village up to our right, which we realised was the village where the Coeur de Gazelles, the rally charity was working that day. We had been told in the morning briefing that this was the only day where the charity village was really close to the rally route, and that Gazelles were welcome to visit. We looked at the time and decided that it was going to be touch and go to get to checkpoint 2, so we discussed going to the village instead. However there was another checkpoint ahead and although we knew it wasn’t ours we thought we would go and ask their advice. 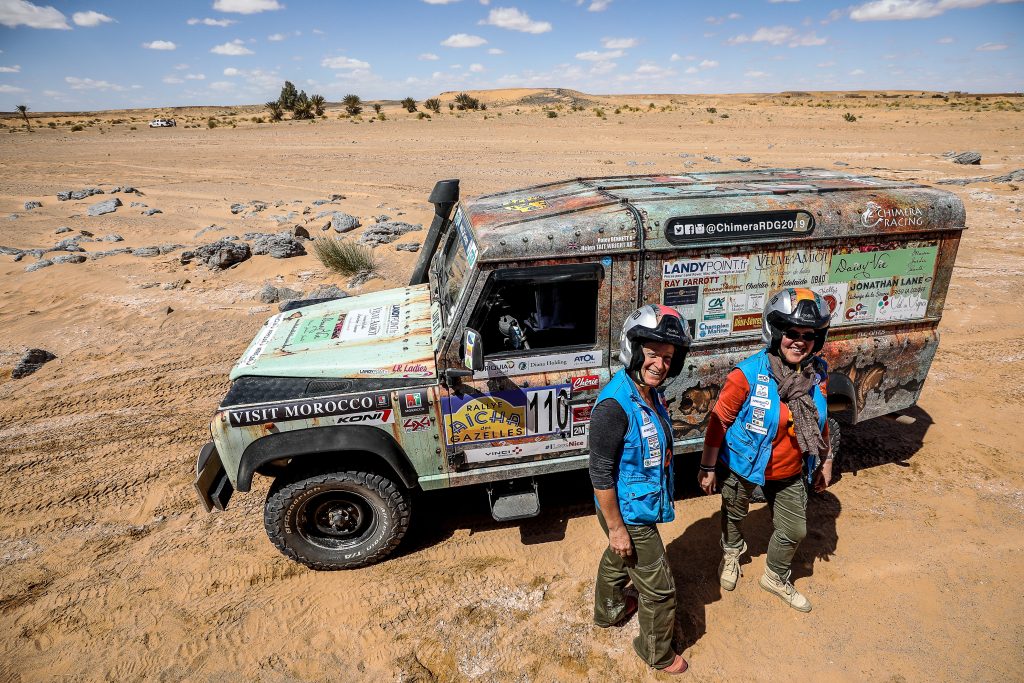 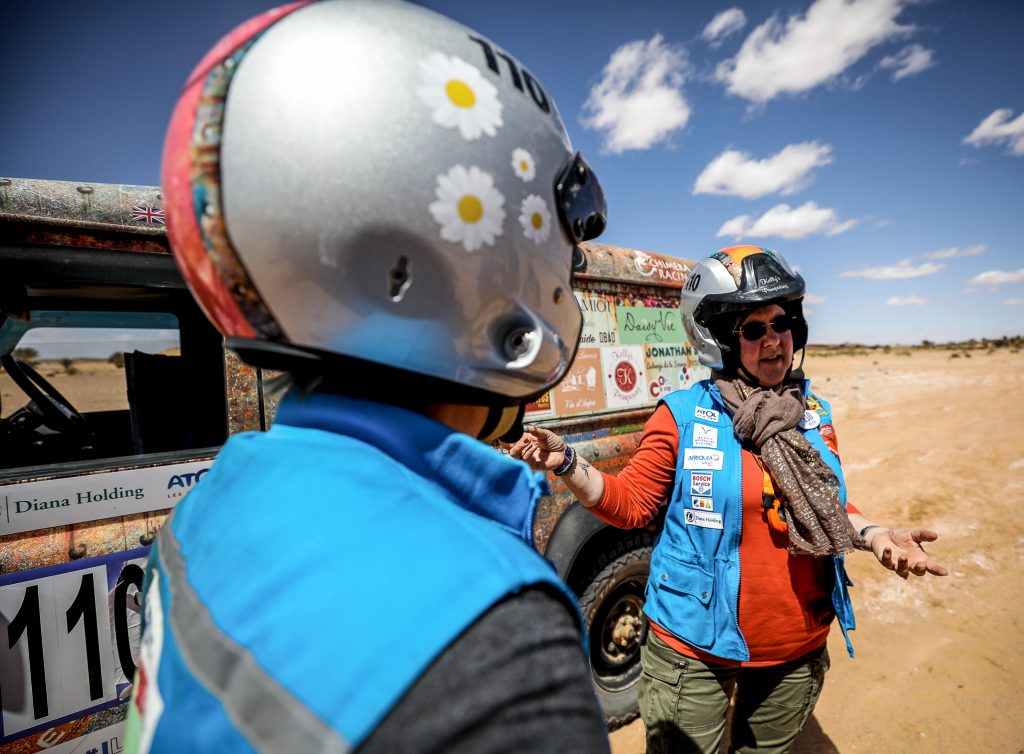 We decided to go to the village, as the work of the Charity was one of the motivating factors for doing the rally. 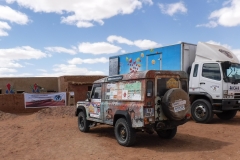 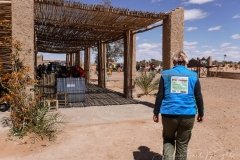 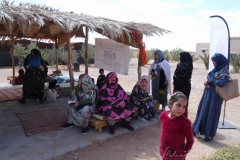 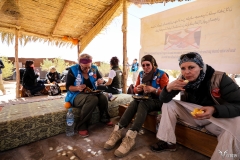 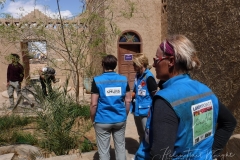 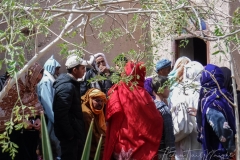 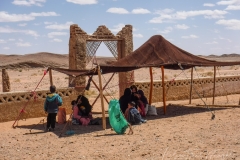 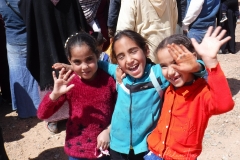 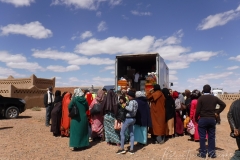 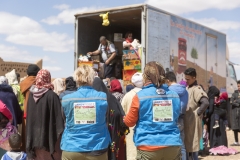 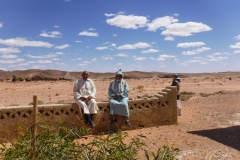 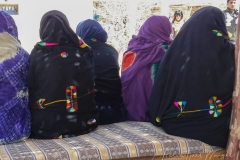 On arrival in the village we saw that the charity was actually working in a complex just on the edge of the village. (We later discovered that this was owned by an English lady called Karen who had gone to the Sahara on holiday and never left! It was a pleasure to have a brief chat with her while we were there.) Anyway, on entering the complex we encountered Marina who is the President of the charity, and she said if we had not already eaten, we could have some of the food that had been prepared for the volunteers, which was very kind, and delicious! After that we explored the complex and saw the queues of people waiting to register and also waiting to get their treatments. We also witnessed the donations being handed out to the local people from the truck.

It was a special thing to be able to witness the Charity at work, and despite only validating one checkpoint that day, which was disappointing, I am very glad that we visited the village.

When we had finished, we made our way back to the bivouac and being early, we enjoyed the luxury of easy access to the showers before sitting in the late afternoon sun to plot the co-ordinates for the following day. Unusually, all the routes were sharing the first three co-ordinates for day two, so there were three points to plot. 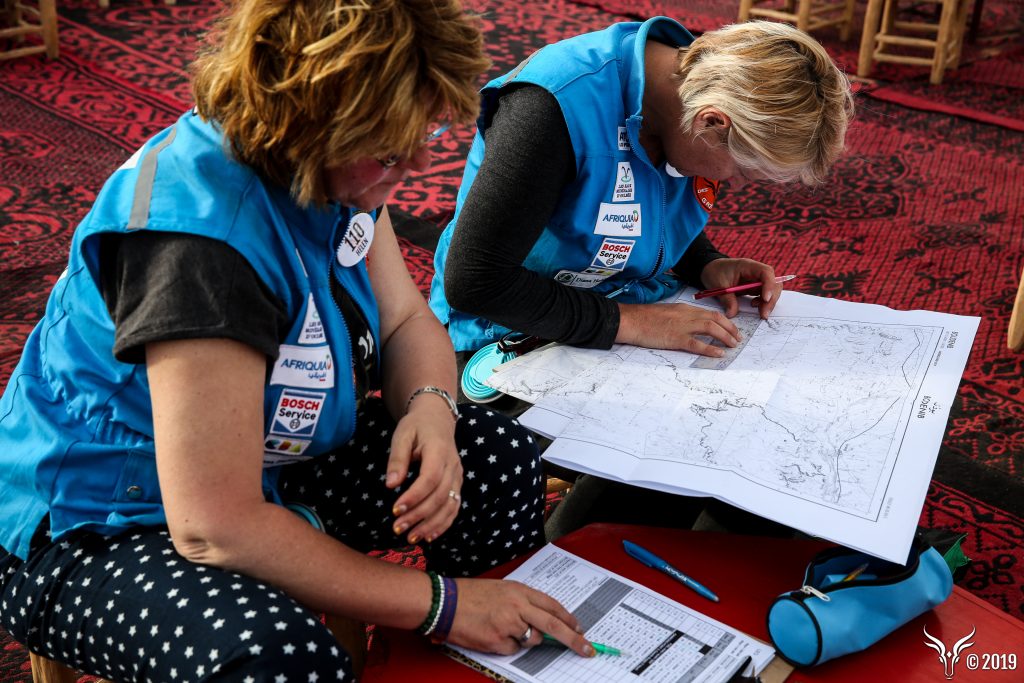 The mail tent opened after the first day of competition, and messages that people had sent via the website were printed out and put into our team cubbyhole, so it was nice to read some of the encouraging words from family and friends at the end of day that hadn’t been that successful in terms of the competition.

After that, the evening unfolded much as it had the previous day, and soon it was time to retire for another cold windy night with little sleep!

And on that note, I will leave you until next time ….