Rallye des Gazelles – Getting to the Desert, Part 1

Rallye des Gazelles – Getting to the Desert, Part 1

This simple title makes light work of an epic story. This was no easy feat, and in some ways dwarfed the rally itself.

The first part of the journey is all about getting funds in place and this is in many ways the biggest challenge of them all. This should be a task that brings the two human members of the team together, but what is certain is that it exposes any cracks in the team dynamic. Fundraising is hard work. It takes time and commitment. Lots of it. Especially as a first time team, and even more so when you are two Brits living in France. It is about being visible, about working the social media channels, about talking to anyone and everyone about what you are doing, attracting media attention, about approaching companies to ask for help, about understanding that sponsors want something back, and delivering on that. In short you sell your soul to the highest bidder, but along the way there are many rejections. The most important thing is to keep smiling and keep working hard and take equal responsibility for the task. 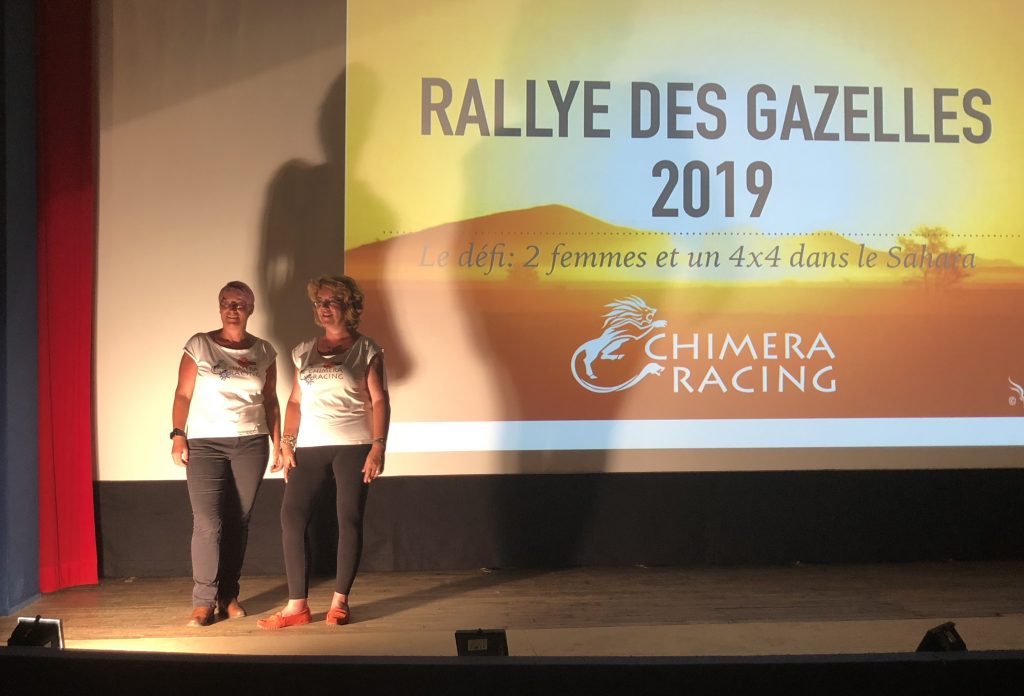 Making a presentation at our local cinema

We were exceptionally lucky that Chris agreed to loan us the money to get our registration fee in for the rally, but I will be completely honest and say that this put enormous strain on our personal relationship, almost pushing it to break point. The fact that I was unable in the end to repay all of that loan will be something I feel badly about for ever, but we agreed that writing the money off was less damaging to us as a couple.

However, thanks to Chris’s generosity and the support of our many sponsors, partners and supporters, we were on the road!

Preparing and equipping Priscilla was also totally funded by Chris, and major thanks must also go to Jonathan here ; he really made it all possible in terms of getting her rally ready, as well as supporting us in a totally hands on way closer to the rally itself.

We also had to get some training under our belts, and the first thing was the off road driving training which was undertaken in the Dordogne under the excellent tuition given by Paul from Xplorability. It was a great initiation into the awesome capabilities that Priscilla has, and an experience I enjoyed very much. Often these days when I am driving somewhere offroad, Paul’s words are in my ear, offering a guiding piece of advice! 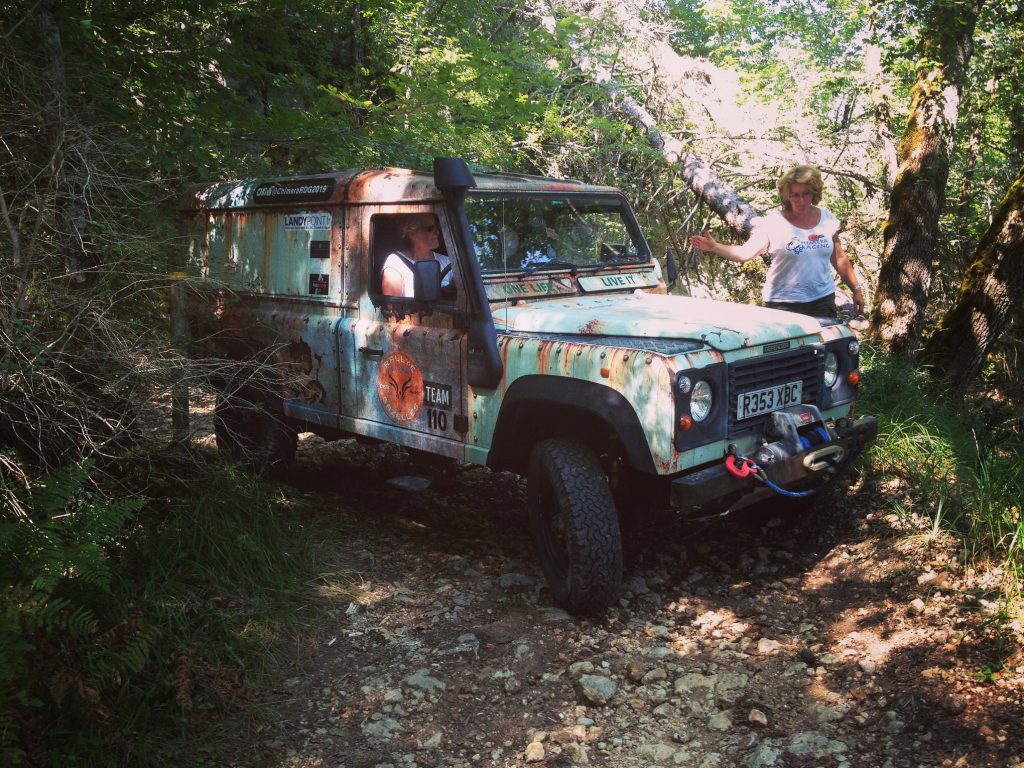 Guiding Priscilla down a steep, narrow rocky path on the off-road course

Next was the navigation course in Avignon, run by the rally organisers. As well as getting our first taste of navigation and early morning starts, it was our first chance to meet fellow Gazelles and one of the highlights was meeting fellow Landy ladies Jo and Katerine, Team 111, who were competing in another Defender 110, albeit a much newer model. 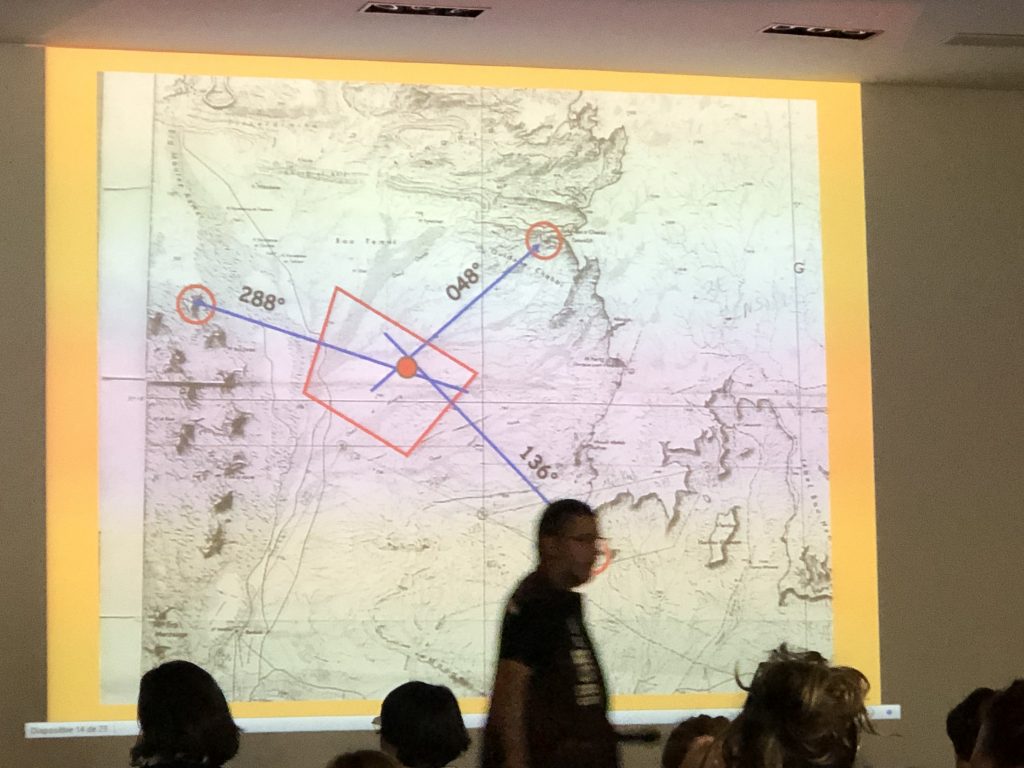 On the navigation course in Avignon. It’s not this easy in real life!

In the run up to the rally, everything was about lists – equipment lists, contact lists, document lists, lists of rules ….. making sure that we had everything required for entry in place and everything packed in the car. This was an extremely stressful time – it seemed that for every item wiped off my white board another was added! We also needed to try out some of our equipment prior to departure; trying to get to grips with re packing a pop up tent occupied rather too much of that time! I was struggling to sleep, the atmosphere at home was strained and more and more of the responsibilities were falling to me. (Great training as it happened for the rally itself!) But the public smile stayed on!

Then there was sticker stress …… the organisers had supplied us with the official event sponsor stickers and the plan of where they should all go on the car. Great, apart from the plan simply didn’t work for a Defender which has the wrong shaped doors, and a totally different body shape to most other 4×4’s! Many phone calls, emails and exchange of pictures were necessary to get the positioning to their satisfaction. I could have screamed!

One of the last pieces of equipment to get was the dreaded helmets. I have a super sensitive scalp and I knew this was going to be something I didn’t enjoy, and the helmet did not fail to live up to expectations. The only way I could actually put it on was the wear a buff over my hair so that it did not pull on it, but that was a workable solution, so I persevered as wearing the damn thing was obligatory.

Finally, departure day dawned and many of our supporters came to wave us off and wish us luck before we hit the road to Nice, the destination for the official departure of the rally. 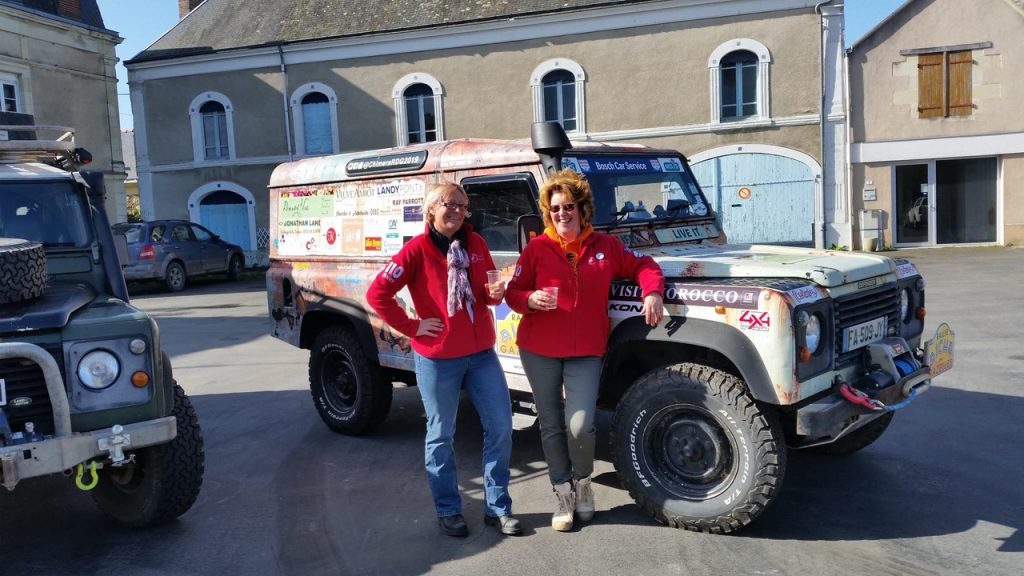 It’s a long drive to Nice, so we split the journey over two days, and were pleased to have Jonathan accompanying us in Steve, his 110. A big surprise was not seeing any other team cars on the drive down, but as soon as we got to the hotel we started meeting up with the other girls.

The last hurdle before departure was Verification Day; the moment of truth, as to whether we had everything in place, and would pass scrutineering.

There were a few tense moments when the stickers were deemed to be in the wrong places, after all my efforts, and when there was no power to one of the supports for the tracking equipment, nearly causing my carefully maintained control to crack, but Priscilla got her seal of approval first. Then it was our turn, to check that all our documents were in order, all the medical requirements fulfilled and we had the approved equipment.

Finally, we had our official gilets and bracelets and were cleared to go! 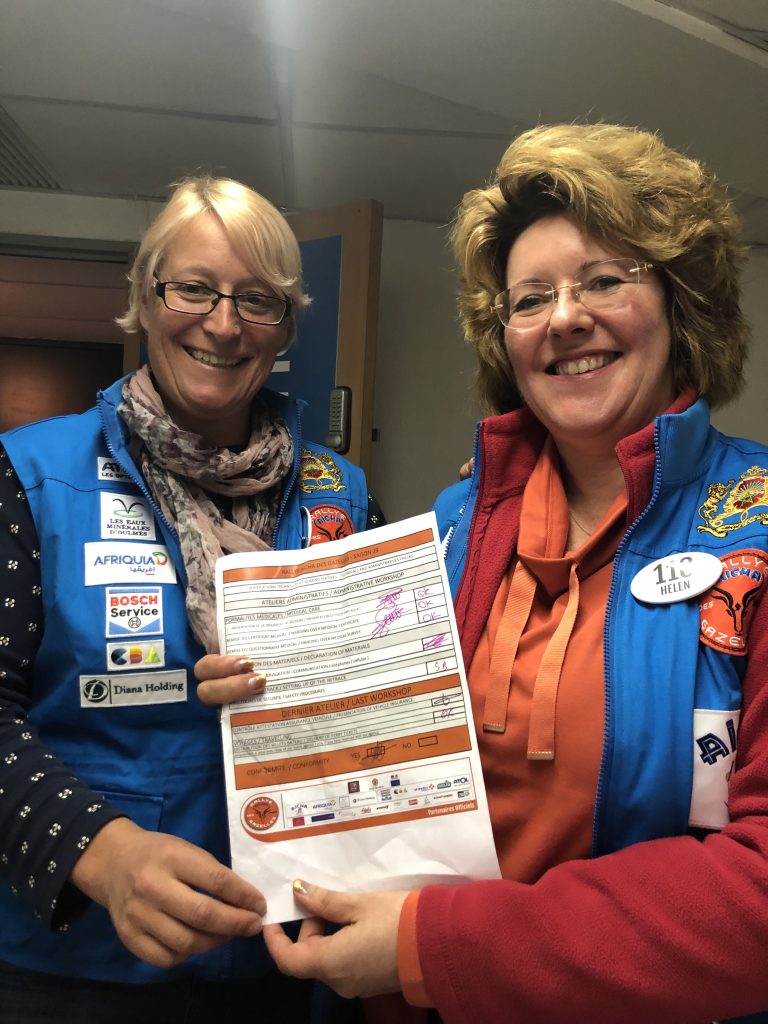 Everything signed and stamped! We are ready to go!

I so desperately wanted to share the relief of that moment with Chris as he was instrumental to getting us there, but a Facetime call had to do! I was so pleased however that Jonathan was there with us.

After our official briefing we headed off to the Hard Rock Cafe to eat before getting some sleep ahead of Departure Day …… more next time …..