Wednesday 20th March dawned in Erfoud …. already one week since we left home, and the last day we would have contact with the outside world until the end of the competition as our mobiles would be confiscated at the end of the Prologue. 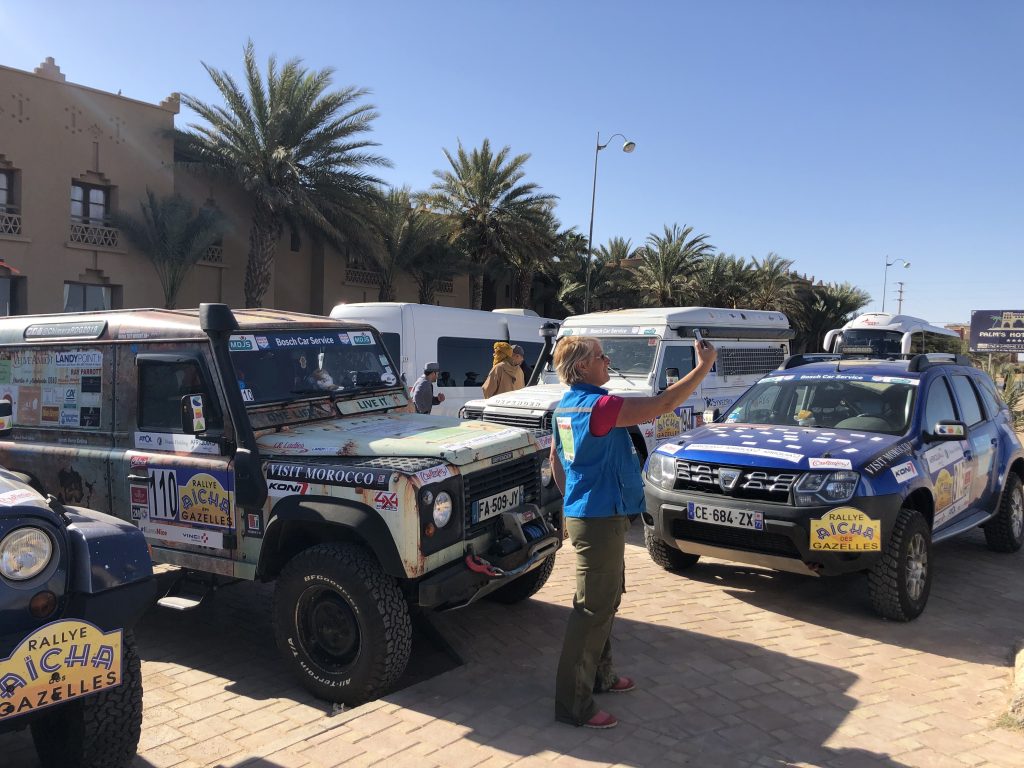 After breakfast we headed out to give Priscilla a check over; a process which would become part of our morning routine throughout the rally, and one I considered essential given the events of the day before! All was well. We didn’t have to be at the rendezvous point until late morning so we went to fill Priscilla’s tanks and check out which road we had to take out of town; we had a road book with directions for that part of the day. The town started filling up with Gazelles cars – some people had stayed on the outskirts – then gradually we all turned onto the road south towards the rendezvous point. We weren’t quite sure what to expect, we were a bit apprehensive and a bit excited! This was really happening! 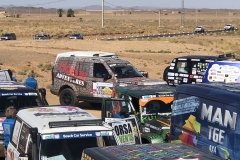 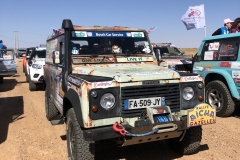 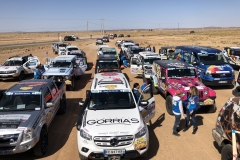 As everyone arrived at the rendezvous point, there was a definite sense of excitement and anticipation. I was pleased to finally make contact with the two American teams, fellow Landy ladies, albeit in more modern Discoverys, who had come straight to Morocco and missed out on the start in Nice. The Hoehns would prove to be our fairy godmothers later in the rally.

Soon it was time to sign our first check in papers and head off to the bivouac. It was about a 10 minute drive, across the desert terrain, which was plenty of time to appreciate just how dusty our adventure was going to be!! We pulled up into our first starting line and then headed off with everyone else to explore the bivouac for the first time! 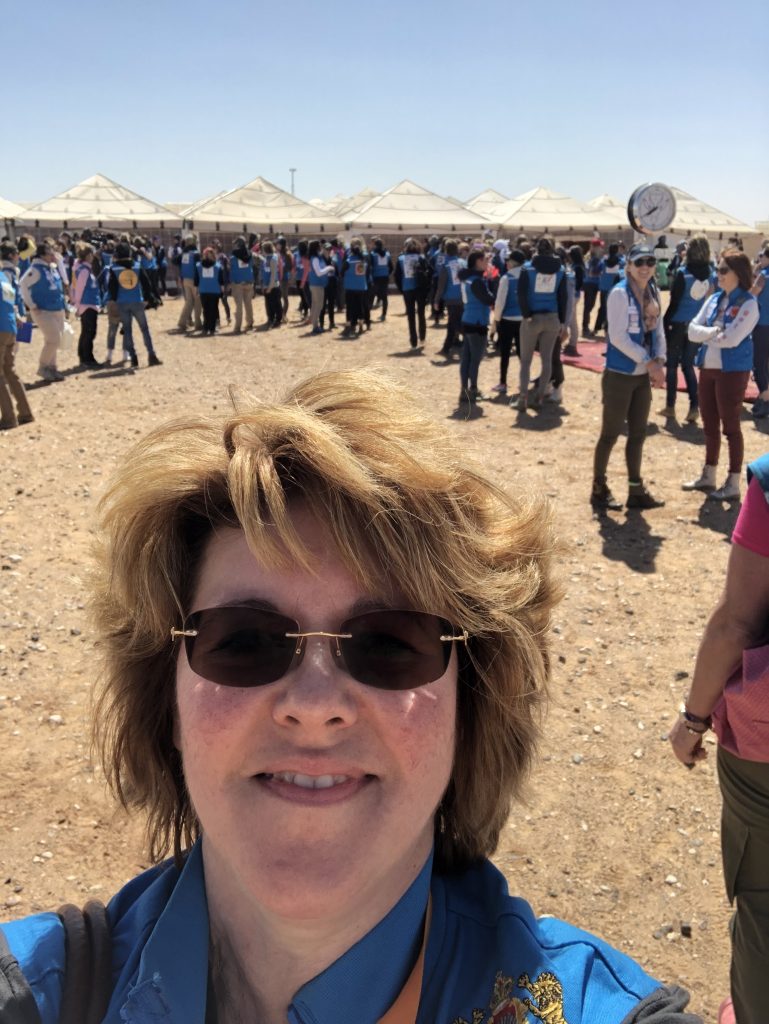 Our next call was for the official picture! 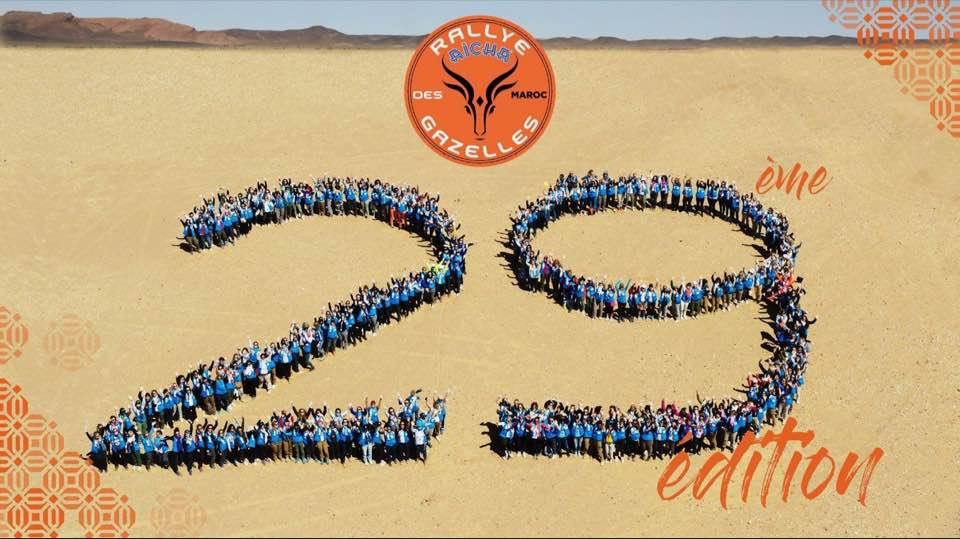 Then, playtime over, our first briefing. We collected our stack of maps for the rally and settled in the restaurant tent to plot the points for our first sortie into the Sahara, our first taste of the competition. It was quickly apparent that there weren’t really enough tables for everyone but we managed to find a spot and started to get on with the job. As the prologue doesn’t count towards the final result we were able to confere with other Gazelles, but the time went very quickly, and our start time was approaching, so we went to the car to get our helmets on (how I hate wearing a helmet) and wait our turn to head off. 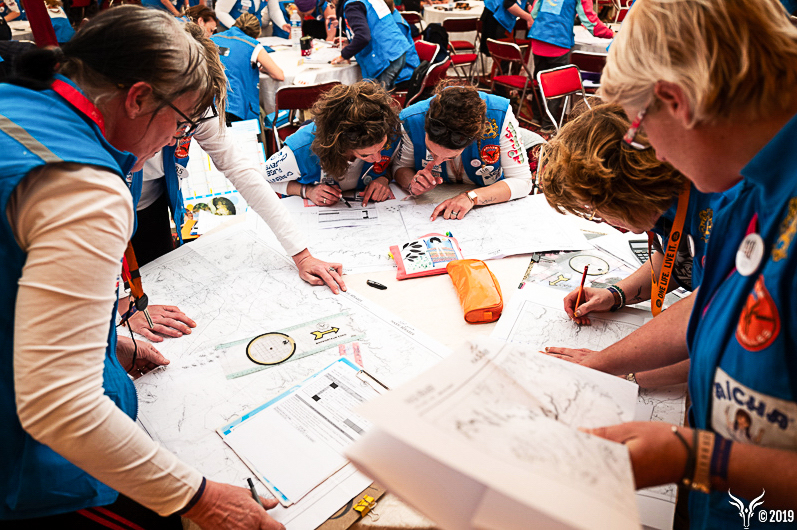 Plotting the points for the prologue 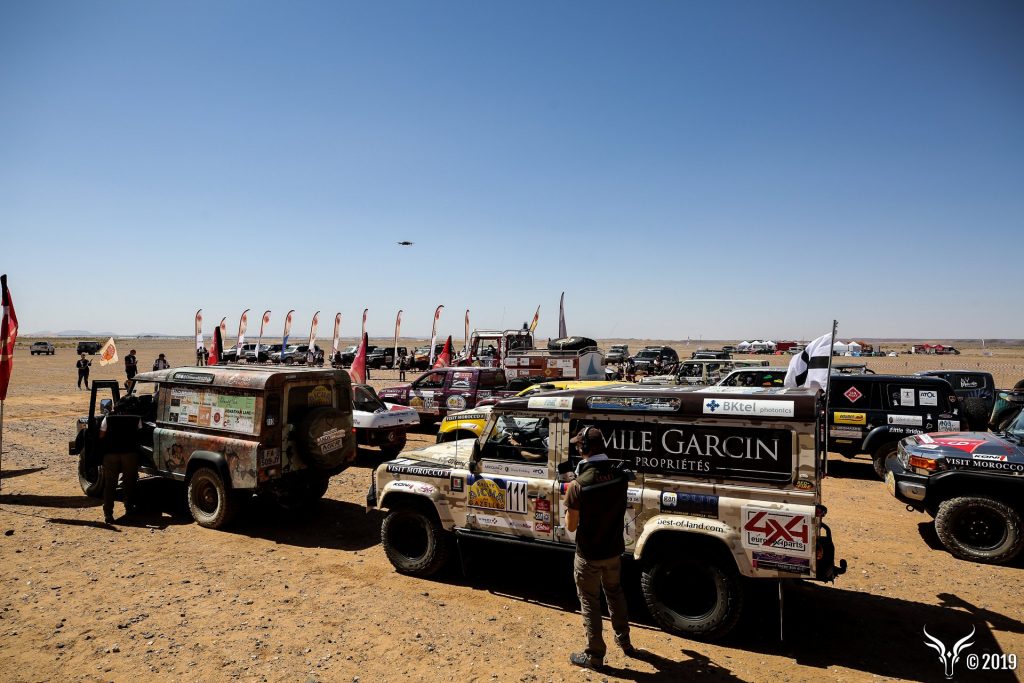 Waiting on the start line with Jo and Katerine, Team 111 behind us

Then, the flag is down and we are off! After a quick check of the heading we drove off into the dust towards checkpoint 1.

Our next new encounter was with camel grass in the sand. This is hateful stuff which makes small sand drifts much more difficult to drive than they should be, and can easily catch you out.

Yes we got stuck, so the shovel and sand rake got their first outing, as did the sand ladders. All part of the fun! We decided to skirt around the patch of camel grassy sand and arrived at our very first checkpoint!!! A moment of celebration! 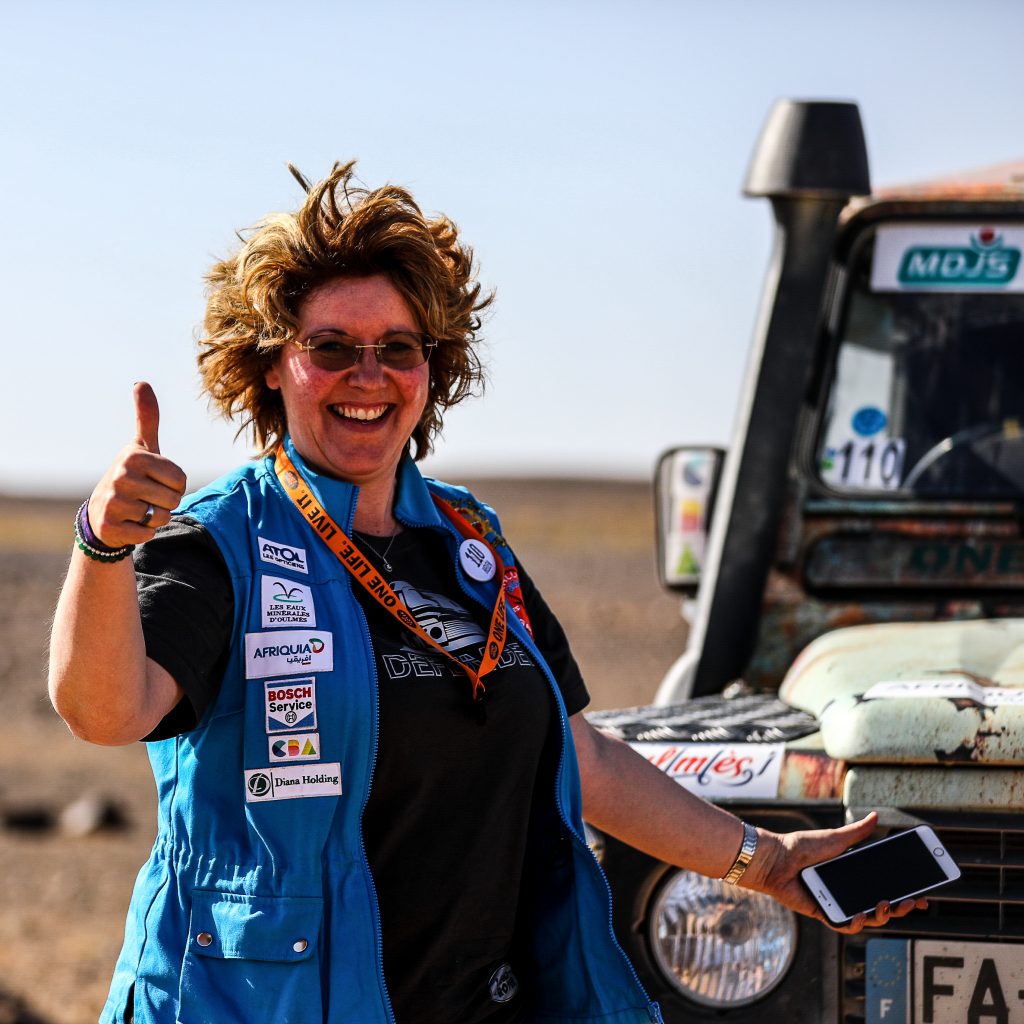 One down two more to go, so back to checking the map and our headings before setting off again. 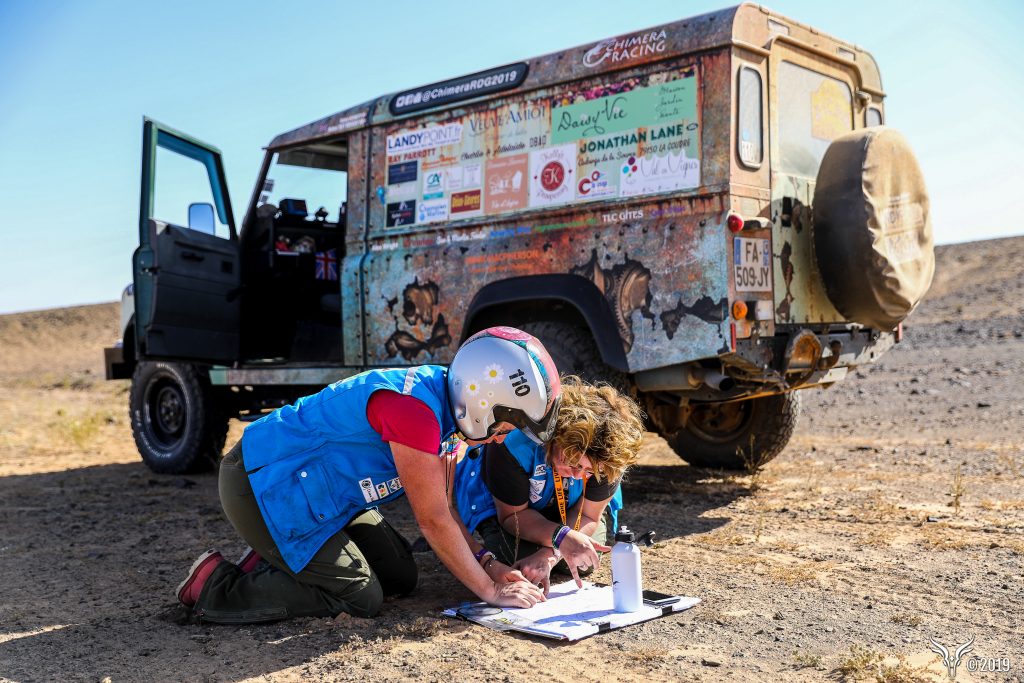 We found checkpoint 2 relatively easily too, so we felt quite good ……. at each checkpoint we get a validation sticker on our control sheet and this is cross referenced with the control sheet of the man at the checkpoint. The checkpoints are red flags, which theoretically should be easy to spot but they are cleverly positioned to make them really difficult! 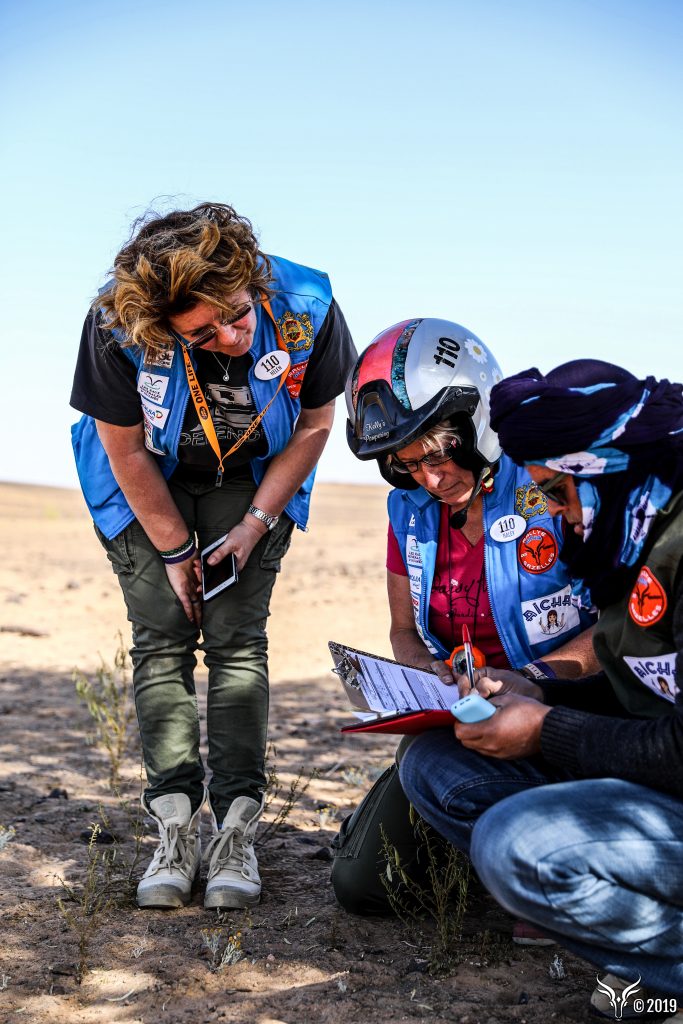 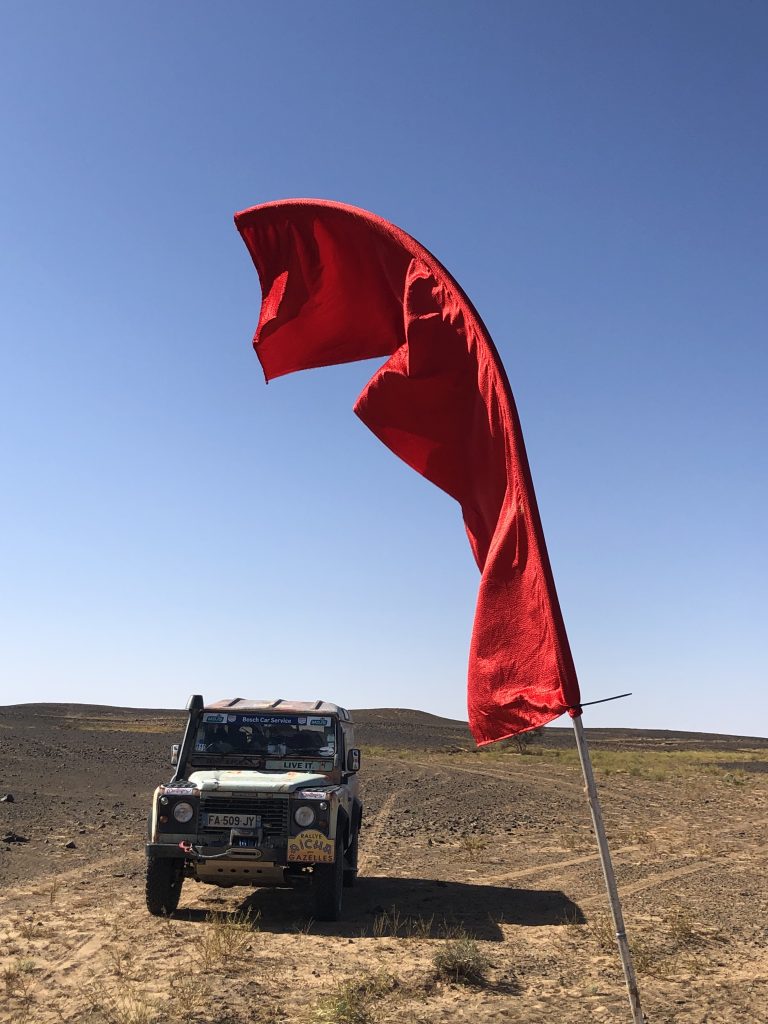 You would think this would be easy to spot wouldn’t you?

One more to go, the one with the longest distance so far between the points. This one was more of a challenge!! We headed north east across different type of terrain with a few more shrubs and skirted around a little village, and by this time the sun was starting to sink in the sky, so no time to waste. 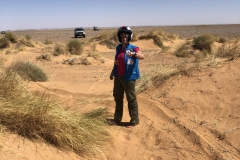 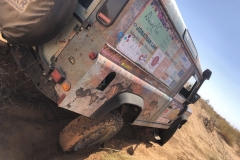 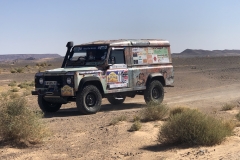 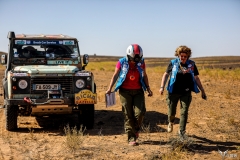 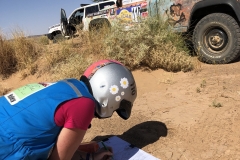 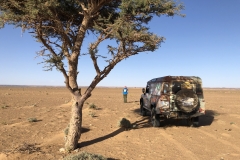 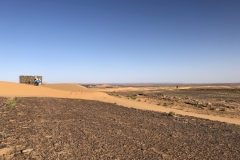 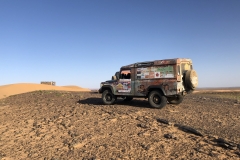 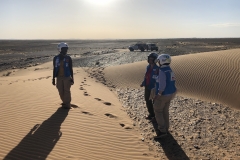 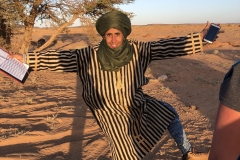 We finally validated our last checkpoint at 7pm, which was a bitch to spot, and then turned for “home” as the light faded completely.

Driving across the desert terrain in the dark was not the most fun, but we followed some other cars in and got our first sight of the bivouac by night. Throughout the day I had taken as many photos on my phone as I could to send to my sister who was taking over the social media accounts while we were “off grid”, so before signing in, we stopped to do that, and to make our last phone calls home from our mobiles. Then we rolled across the finish line and waved goodbye to the phones …. 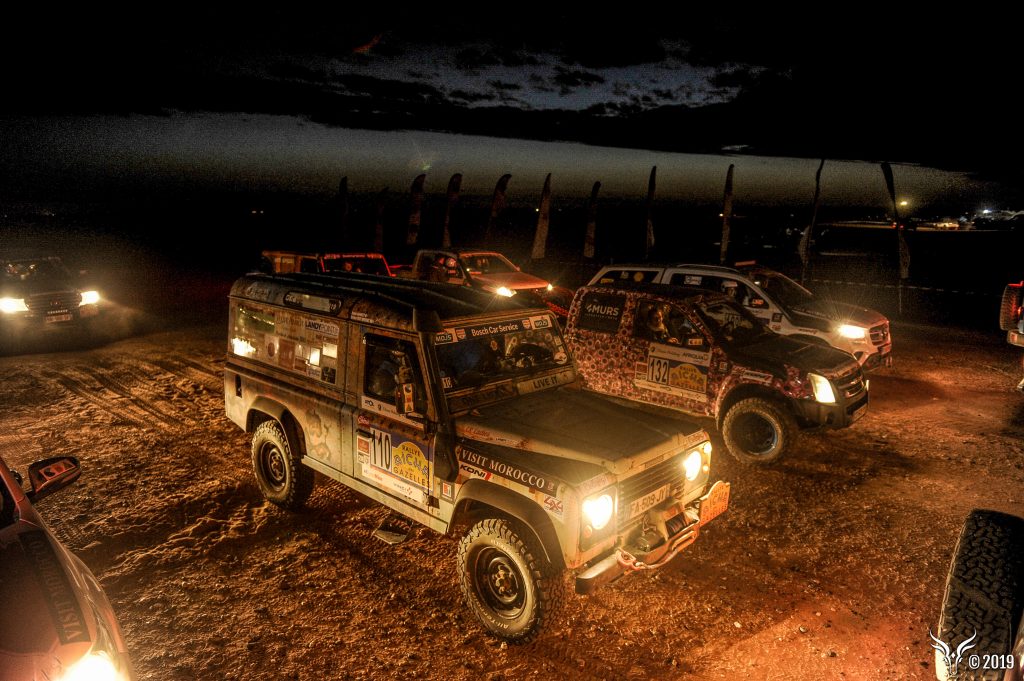 After you get a finish time and your distance for the day is taken, the next hour is hectic to say the least, as that is the amount of time you have to get sorted for the night. First you go to the tent park and unload your camping gear. Of course everyone else is trying to do the same and it is very congested. After finding a pitch for the tents, someone has to go to the control trailer and submit the paperwork and get the sheets for the next day, the car needs to go to be refuelled (there is usually a queue there too) and then take it to your mechanics station. That hour goes really really quick! And of course the tents need to be put up, a challenge in the wind (who knew the desert would be so windy) the mattresses inflated and most likely a toilet stop is required, where there will also be a queue! Being able to identify your tent in the sea of tents is very important !!!

Then you go to eat. There aren’t enough tables for everyone so trying to plot the first checkpoint for the next day isn’t going to happen on a table as others need to eat too. You don’t actually find out until the next morning which route you will be on, so we decided to plot all 6 points in advance. After the first day we realised this is a waste of time and actually waiting until the next day when you know which one you need saves time in the long run. The queue for the showers is long …. see the theme developing here? I decide not to bother and with a 5am wake up call to look forward to, we went to bed, feeling pleased with ourselves that we got all 3 checkpoints, as we had learned that not everyone did!

I would love to tell you we slept well but in reality, it was horrendous. It’s really really cold in the desert at night, and anyone that knows me will know that I don’t like cold. Despite having what I thought was a cosy sleeping bag, and sleeping in my clothes, I was freezing. Also, the tent park is surrounded with plastic tape, which flaps in the wind, which got up in the night, and it was, I imagine, pretty much like trying to sleep next to a jet engine! Also, the tents are quite close together and you can hear every little sound ……. and to top it off, I never sleep well when I know I have an early start in the morning as I worry about over sleeping. I now realise with hindsight that part of the issue was not being able to get into my normal sleeping position as the sleeping bag did not allow me enough room to do so. Needless to say, not much sleep actually happened!

The camping and sleeping aspect is certainly something that I need to give serious thought to before returning to the Gazelles in 2021.

So, on that note I will end this blog, and next time I will take you through Day One of the competition!