Getting to the desert – Part 2

Saturday 16th March 2019 dawned bright and clear in Nice, and we headed off to the Promenade des Anglais.

It was departure day! The official start of the Gazelles, although of course in reality the last year had been about little else. It was a chance to see al the cars together, to meet and greet the public who had come to see us off, to see and be seen! Priscilla attracted quite a bit of attention, and we were filmed for Gazelles TV, getting our sponsors logos in front of the online and TV audiences. 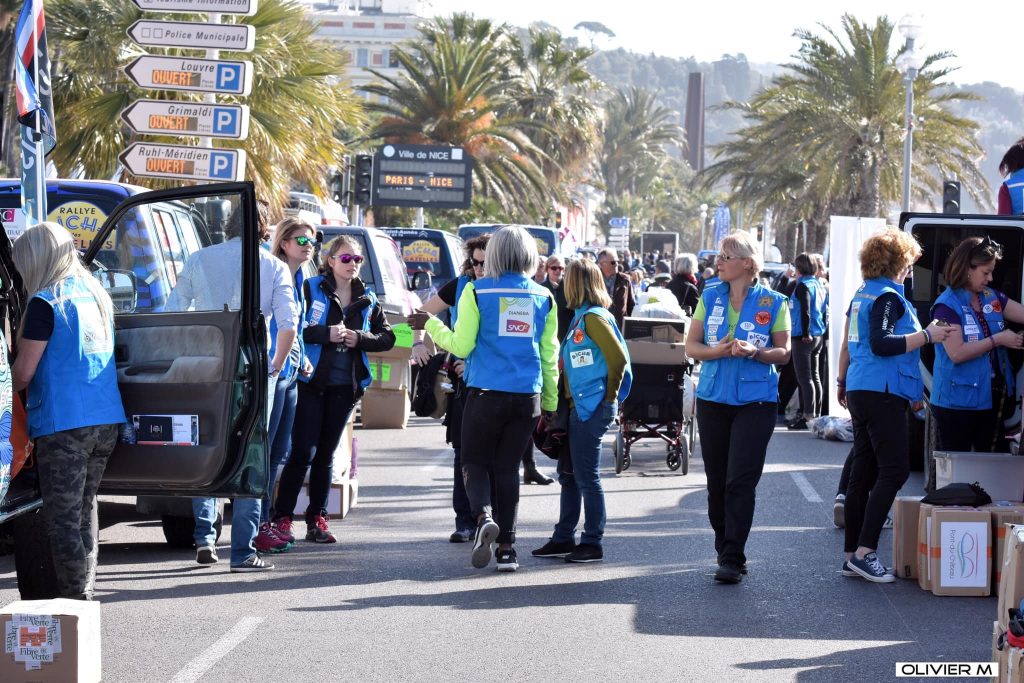 Gazelles on the Promenade des Anglais

Our first official activity was to form a human chain of Gazelles and pass down all the donations that had been collected for the Coeur de Gazelles to the truck waiting to take them to Morocco. You can read all about that in my blog post “The Humanitarian Causes behind our Adventures”

Then theoretically we had time to take in the sights and eat before there was entertainment on the main stage, but we were quickly approached by the organisers who, after establishing that we had Jonathan with us, asked if we could help out a fellow Land Rover team, 151. They had a later Defender which had developed problems and gone into limp home mode. 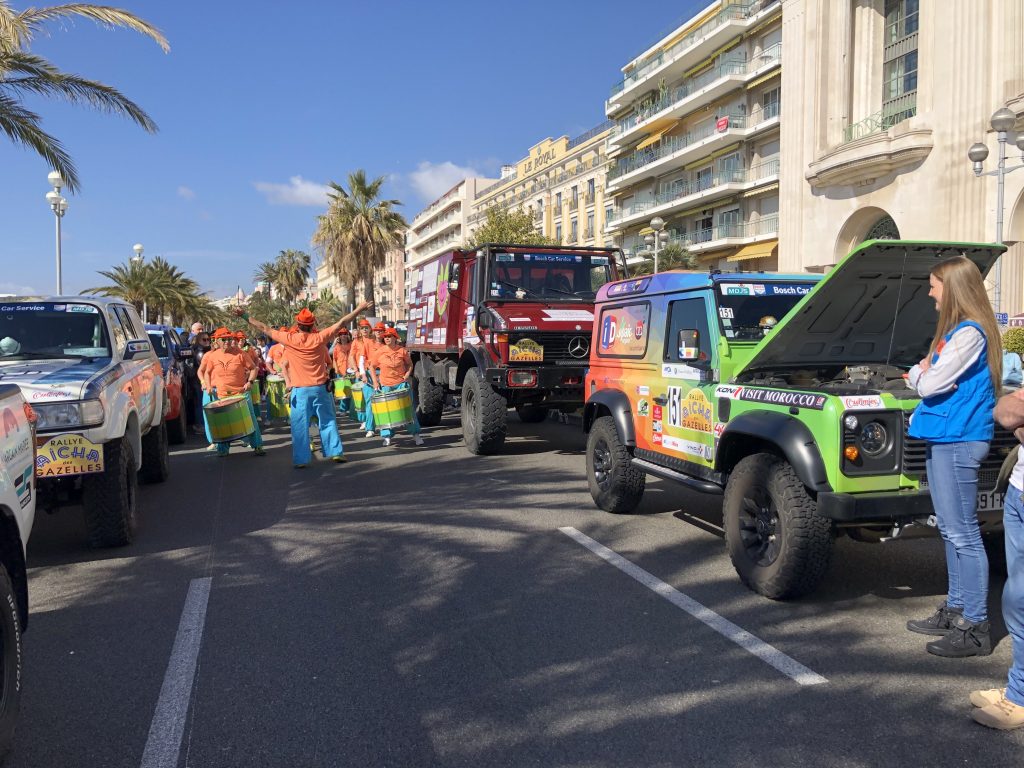 The big question was, did Jonathan have the computer with him to sort this out ???

Luckily he did, but it was back at the hotel in Steve, his 110, so Valerie, the Team 151 driver and Jonathan had to get a taxi back to the other side of Nice to collect Steve, then we had to get permission for Jonathan to enter the section of closed off road reserved for the Gazelles in order to come to their aid. Certainly added a bit of excitement to the day! 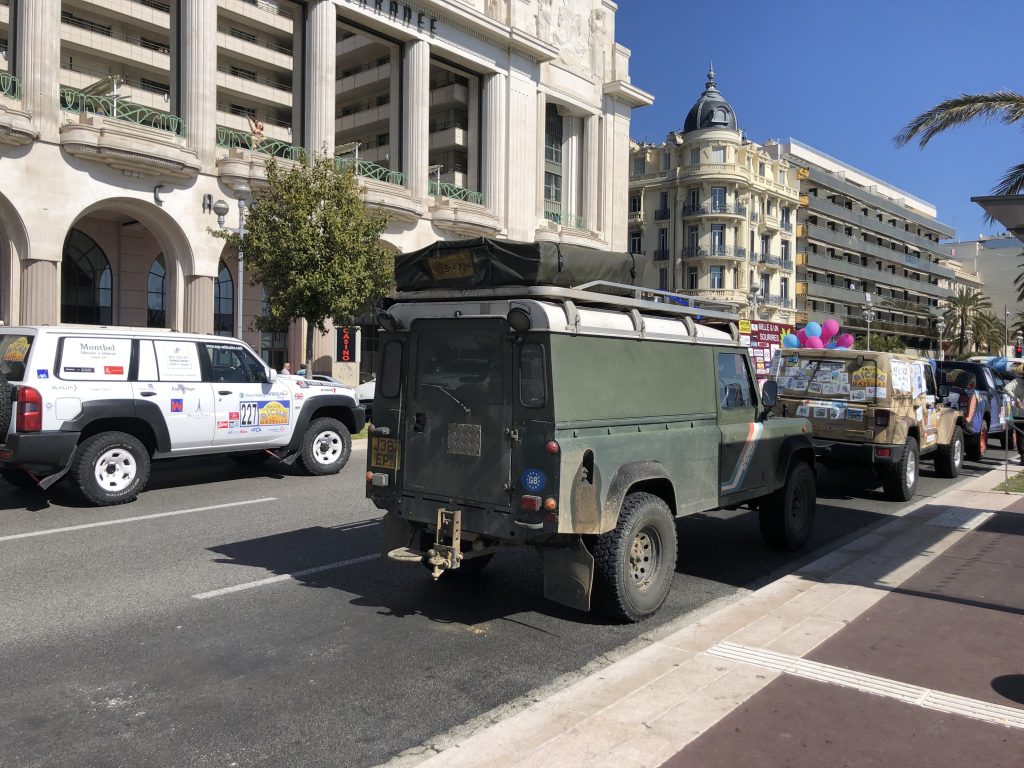 With the fault cleared Valerie and Alexa were ready for the depart, and very grateful. I would just add here that I couldn’t be more grateful to Jonathan for accompanying us to Nice, and just being the most wonderful support throughout. 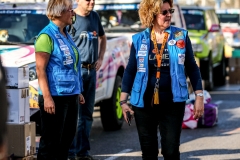 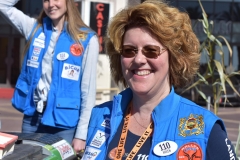 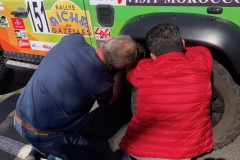 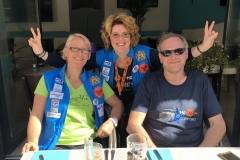 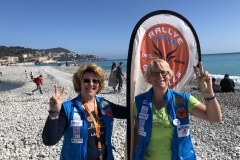 As 3pm approached we all returned to our cars, ready for the official departure. This was it! Once we had passed under that arch we were on our way, and the next step of the journey to the desert stretched ahead. Everyone was beeping their horns and there were lots of tears and emotions as fellow Gazelles said goodbye to their families. Before leaving home I knew that the only way I could deal with the tensions within our team was to keep my emotions under control. I haven’t said much about this and nor do I intend to, but after so much stress to get to this point, I allowed myself to feel some excitement and nervous anticipation as the actual moment of departure approached. Being a realist I knew that the next challenge ahead, the ferry, was one I was dreading, and this also tempered things a bit.

However, eventually we made our way towards the arch, and then, we were through, waving the British flag, as it should not be forgotten that in the 29 year history of the rally we were the very first 100% British team! 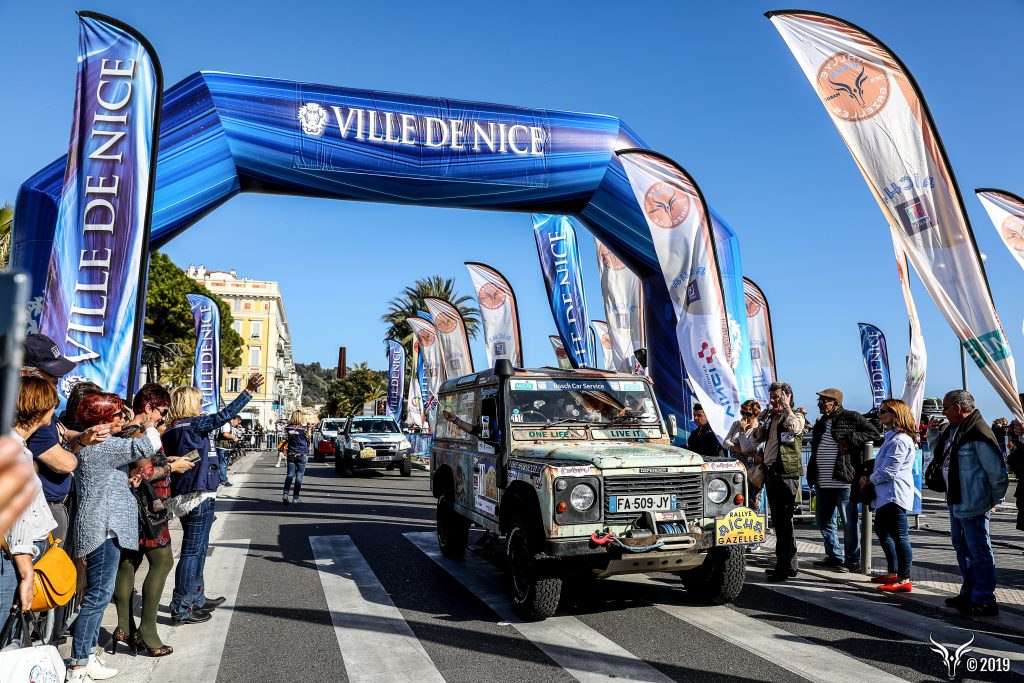 It seems to be the way with the rally that you wait around for ages, then there is a flurry of activity, then you wait again! And so it was, after passing under the arch, we joined a queue of Gazelles cars waiting to get out of the town and back on the road towards Sete where we would catch the ferry to Morocco.

After over 3 hours on the road we arrived in Sete in the dark and parked up with everyone at the ferry terminal. I hate boats. I get seasick and I really didn’t want to spend 40 hours on a ferry. However, the Gazelles literature emphasised this was an ideal chance to get to know fellow Gazelles and that there would be a refresher navigation course, so against my better judgement, we were waiting to board. The boarding proceedure was disorganised and took forever, and we were late getting on, but eventually the boat left the dock. 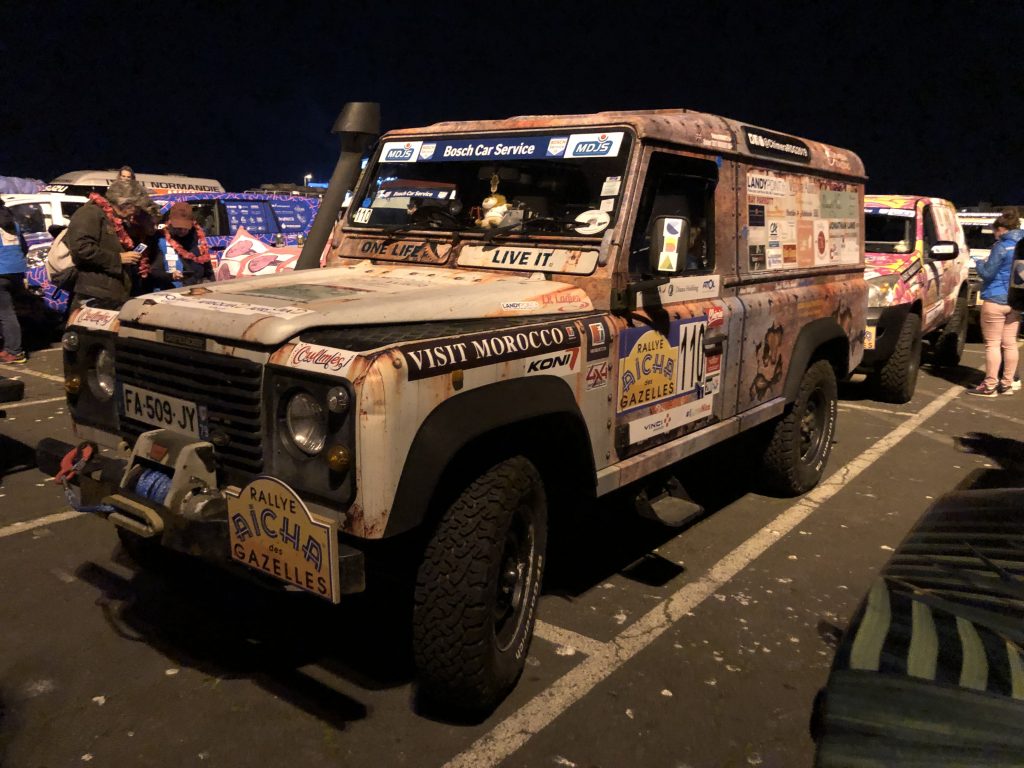 Waiting to board the ferry

Dosed up with travel sickness pills and eating Gin Gins like they were going out of fashion resulted in me not feeling as ill as I expected during the crossing, but it really was not up there as a highlight of my life! The cabin was airless cramped and noisy, with the most ridiculously small and somewhat smelly shower/toilet. On the plus side the restaurant was actually quite nice and we had a couple of nice meals there. I also met Ivy, an American Gazelle and Susan from Australia.

The navigation refresher was not quite what I expected, and to be honest had it not been for the kind help from fellow Gazelles I’m not sure we would have gained much from it. 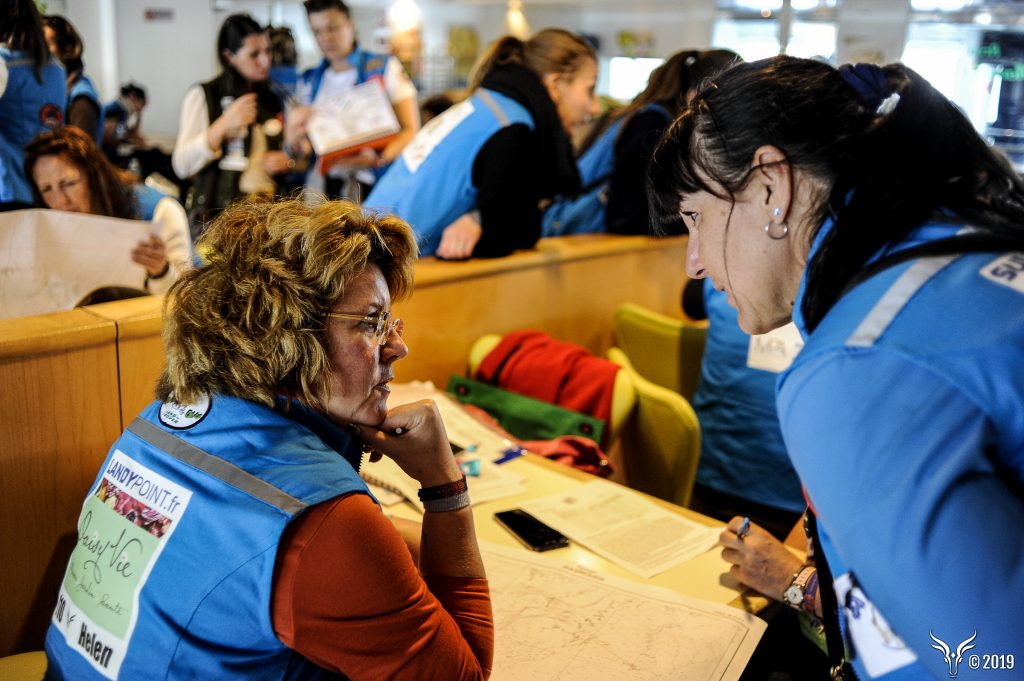 Being very thankful for the help of fellow Gazelles on the boat navigation exercise.

During the crossing we were able to watch the progress of other Gazelles teams who had elected to drive down through Spain instead of taking the boat, and I really wished I was doing that too!

Eventually we were all assembled in the boat discotheque ready to disembark. The boat was already running late as an engine had failed on the crossing, to add to our late departure, and I was very aware that we had a long drive to Meknes, our first Moroccan stopping point once we got off.

Getting off the boat proved to be a challenge too! The boat was making two stops, Tangier and Nador. We were getting off in Tangier. Unfortunately despite each vehicle having a sticker in the windscreen with the destination, we, and 3 other Gazelles cars had been loaded surrounded by vehicles going to Nador, so of course they were not moving! Luckily for us one of the cars near us was an Organisers car, and so eventually the ferry employees found someone to move a car and get us to reverse out, but it took forever!

Finally we were on Moroccan soil! That was a good feeling!

Next time, the final part of the journey to the Sahara ……