Arrival of Priscilla – Part 2, The Wrap!

In the last post I left Priscilla outside Blue Lizard ready for her transformation.

But getting to the stage when the wrap was ready to be applied took some time in terms of design and negotiation!

As I said before, the inspiration was Mad Max / Steam punk. I had seen several cars, or at least pictures of them, which conformed to the idea I had in my head. (What did we do before internet?) So, these were duly sent off to Blue Lizard Signs so that they could come up with something unique for Priscilla. I should say here that I chose Blue Lizard as they are close to Jonathan’s UK base, and were keen to help! 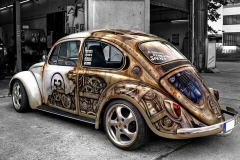 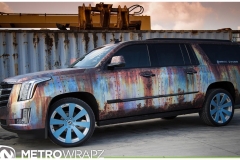 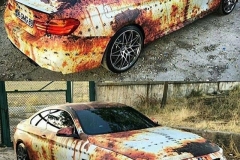 The Beetle was probably the closest to the idea in my head but we also needed space for sponsors logos to be displayed so reluctantly I had to accept that there should be more rusty panels than cogs.

However, in the beginning, I don’t think Gareth and the team were really on the same page as me! This was the first design they sent! 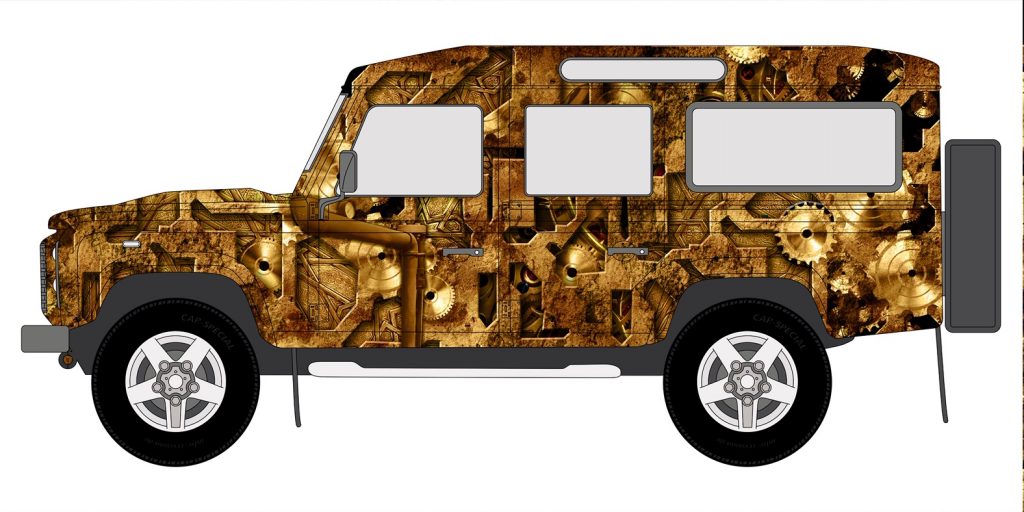 Just not what I had in mind!

I have to be honest and say that at that moment I could have cried! Getting Priscilla right was such a big deal for me and I knew how important her design would be in order to make her an effective publicity vehicle for our sponsors too.

There was also the added pressure of the Beauty Car Contest. This is a competition for the cars in the rally that have been wrapped, and the winners get a substantial reduction in the entry fees for a future rally. I really wanted to take a car that had a chance of winning that contest.

After a bit more discussion and emails flying backwards and forwards, another design appeared. 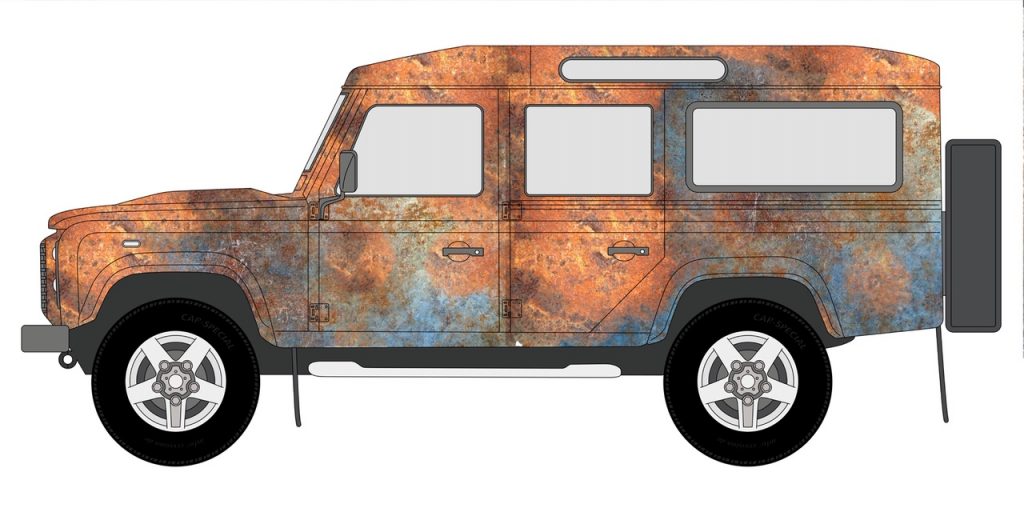 Well, at least the rusty idea was getting through, but she needed more details, more Helen touches! And of course she doesn’t have rear doors or windows … ….

I’m sure that if the guys from Blue lizard read this they would say I was a really difficult customer, and doing it long distance didn’t make it any easier, for sure! (However, I hope they will also agree that the end result was worth all the pain!)

So, we soldiered on, numerous emails and phone calls, and all the time very aware that time was ticking away … I sent several sketches, this is just one, relating to images sent in the same email …. 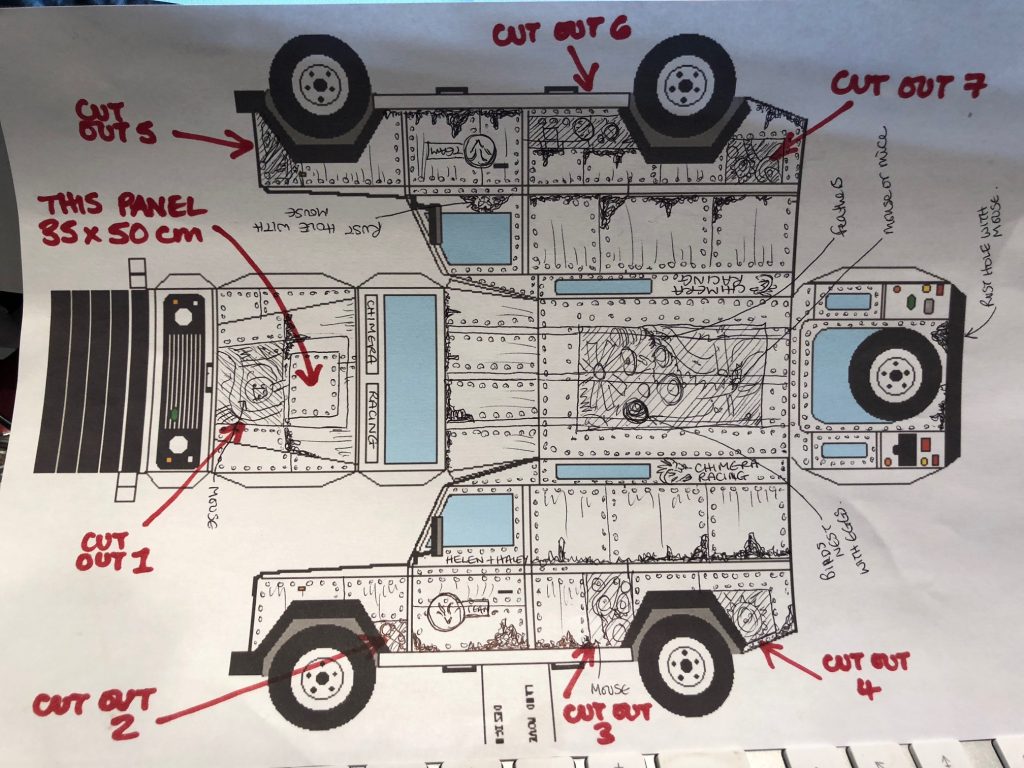 Gareth and I had a break through moment one day when during a conversation where I said that I needed her to look as if she could have been made from old rusty panels, abandoned and then dragged out of a barn, he suddenly got it, and we were on the home straight! I also needed her to be matte, not shiny as I’ve never seen glossy rust!  There were several changes from this sketch, but you can see the progression from that sketch to this design which is the one we approved; 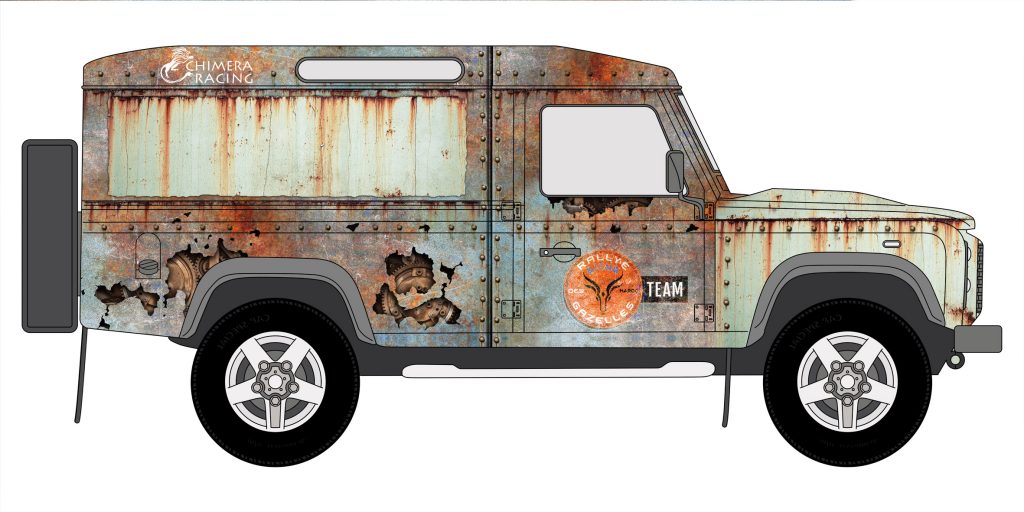 Yes! The template for Priscilla’s wrap!

So, finally it was off to the Blue Lizard workshops, for her transformation ….. 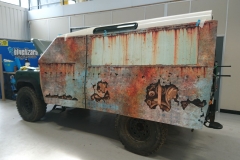 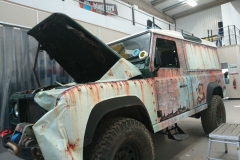 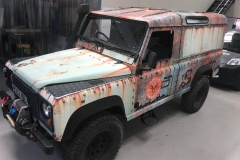 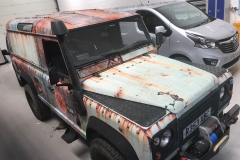 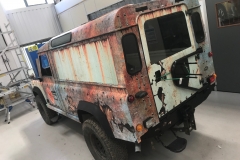 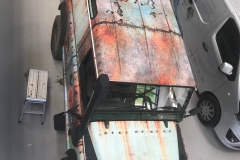 Jonathan was the first of us to see her when he collected her from Blue Lizard (see header image) and we had a nervous wait for his reaction. I think “really cool” was his verdict!

After she was reassembled (lots of bits have to come off to enable the wrap to go on) and got a brand new shiny MOT, Haley and I went off to the UK to collect her. She was much better in real life than on any photo, and still is!

On our drive back to France she attracted so much attention, not least from a chap in Reading services who liked her so much that he put her on his mobile billboard! 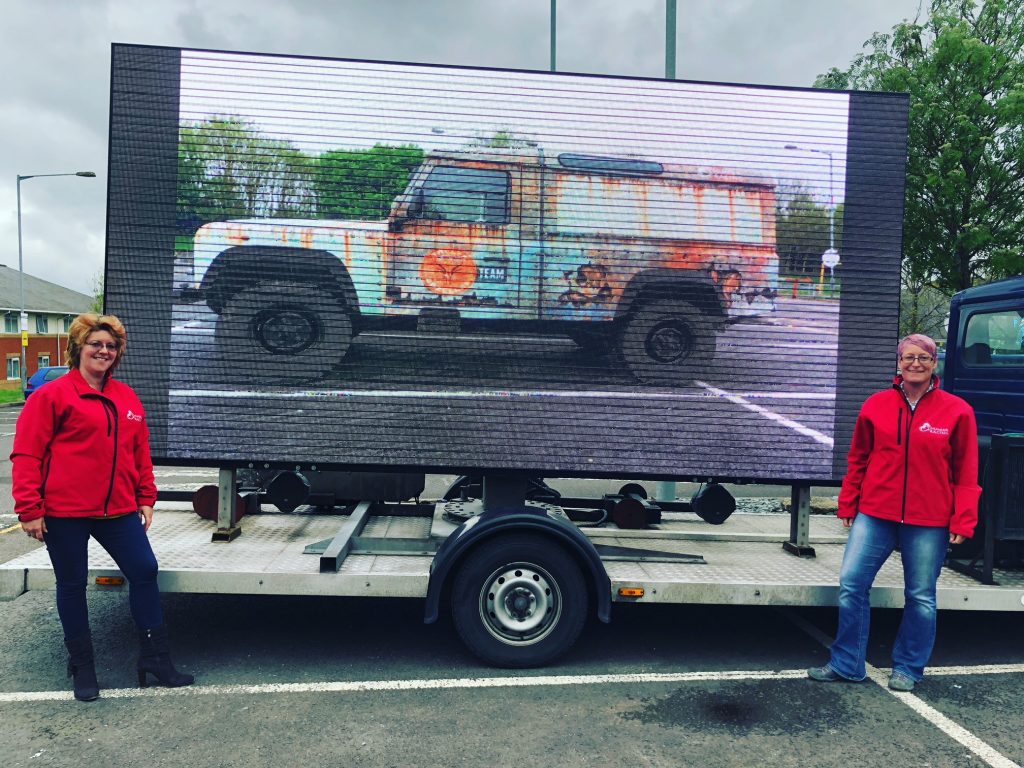 And so, the legend that is Priscilla was born!